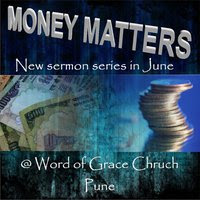 
13 Someone in the crowd said to him, “Teacher, tell my brother to divide the inheritance with me.”
14 Jesus replied, “Man, who appointed me a judge or an arbiter between you?” 15 Then he said to them, “Watch out! Be on your guard against all kinds of greed; life does not consist in an abundance of possessions.”
16 And he told them this parable: “The ground of a certain rich man yielded an abundant harvest. 17 He thought to himself, ‘What shall I do? I have no place to store my crops.’ 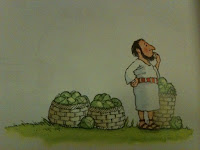 18 “Then he said, ‘This is what I’ll do. I will tear down my barns and build bigger ones, and there I will store my surplus grain. 19 And I’ll say to myself, “You have plenty of grain laid up for many years. Take life easy; eat, drink and be merry.”’
20 “But God said to him, ‘You fool! This very night your life will be demanded from you. Then who will get what you have prepared for yourself?’
21 “This is how it will be with whoever stores up things for themselves but is not rich toward God.”
“Watch out!!” – We have all heard this warning at some point in our lives. Now when Jesus says “watch out”, we’d better watch out.


While Jesus was engrossed in teaching things of spiritual consequences he is interrupted by a man who asks him to settle a family dispute over money.


In the context of money and possessions he tells us to watch out against all kinds of greed
v.15-  Jesus challenges the thinking of the time and goes against the grain of the culture. (He still does that) by making a startling statement: “A Man’s life does not consist in the abundance of his possessions”


v 16. – Jesus goes on to tell a parable. The man in the story is not a crook, he has not acquired his wealth through illegal means. This was honest gain from hard work – just like many of us he was a respectable member of society. His hard work was paying off.


V18.- However his abundance was posing a problem for him. The thought however did not occur to him that he could use his abundant wealth to bless others, to help the poor in own family or community, to pay his workers well, to give something to the synagogue where he worshipped. He was only thinking about himself.


V19. He gets an idea – to build bigger barns i.e hoarding for himself. He was selfish. This is the tragedy of wealth today. It’s interesting to note that Jesus spoke more on money and wealth than on heaven and hell. In fact 15% of what Jesus taught on was concerning money and wealth.


Eccel5:10- Whoever loves money never has enough...
Think about your life 10 years ago, what you had and what you have today. Are you not blessed? You will never be satisfied with wealth and possessions. Its like drinking salty water on a hot summers day.


Some hoard gold, some invest in stocks, others homes. God is not against saving. It‘s our attitude towards money he is interested in and how we use it. Our happiness is not determined by our possessions.
“I’ll be happy when......( you fill in the blanks) If you are thinking in this way ,”watch out”!
So what did this man do?


V18. - He thought to himself.. Four times he says “I” and three times he says “my” in one sentence. He had no thought for anyone else. He does not even mention his family. Watch how he speaks to himself. ( we need to watch how we speak to ourselves). In the eyes of the world he appears to be very successful and people would envy his problem. But what was Jesus evaluation of him and of us if we are like him?


V20. - “you fool”!!! James 4:13-14 what is your life? We need to submit our wealth to the Lord and ask him what He would have us do. It is a terrible thing to be called a fool by Jesus.
Jesus is not against saving and wealth – but what are you doing with it? Have you been rich toward God? What will we hold up before God when we meet home face to face?  Will it be our homes, new phone, gold, stocks, fancy car? Or things we have invested in for the Kingdom of God ?


Luke 11:12 “This is how it will be with whoever stores up things for themselves but is not rich toward God.”
Are you rich toward God? Are we bring generous toward one another? Are we blessing the poor? Use the blessings God has given you.


Luke 12: 33 Sell your possessions and give to the poor. Provide purses for yourselves that will not wear out, a treasure in heaven that will never fail, where no thief comes near and no moth destroys. 34 For where your treasure is, there your heart will be also.
By Navaz Dcruz - July 04, 2011

Email ThisBlogThis!Share to TwitterShare to FacebookShare to Pinterest
Labels: Money, The Rich fool