The 7 great lies in the Church today

How does one know the truth from a lie? How do you  know a counterfeit from authentic? Worse still is how does one sift the half truths mixed with lies which is  the making of heresy? Today the threat to the church of Christ is not an invasion, or even physical persecution ( though that is not desirable and does exit in some parts of the world) but error that is creeping into the church and taking many Christians captive by their fine sounding arguments. this is not new to Christianity - it was already prevalent during the time of the Apostles therefore the warnings in the Epistles.

Here is a super article that was sent to me by a friend that is worth reading , thinking about and doing a spot check whether these things have crept into our churches.
This article though long, deserves our full attention.  I hope you find it instructive as I have.


The 7 Great Lies in the Church Today

Email ThisBlogThis!Share to TwitterShare to FacebookShare to Pinterest
Labels: Church

Are we on the same page that Jesus is ? What kind of house will you build for me? 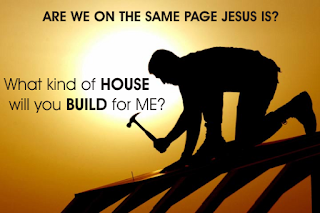 This message was preached by Tim Davis in Mumbai at the Regions Beyond Leaders Meeting. This is a summary of that preach.

In Is 66 there is one question God ask his people “What kind of house will you build for me?”
That question is a fascinating one to think on. The way the question is asked is in the context of God saying “Heaven is my throne and earth my footstool – what kind of house will you build for me?” How can you build anything for me? It’s like David wanted to build a house for the Lord. Nathan comes back with a word from the Lord where God says to David “No, I will build you a house “and He talks of David’s house going on forever and that Solomon would build the temple. But this is only fulfilled n Jesus when he said “I will build …”

So our aim should be to say “ I will build what you are building”. Nothing else will please God (Ps 127 Unless the Lord builds the house,  the builders labor in vain.) God expects it to be done His way.
It’s got to be done in His strength for Him. It’s not about personal preferences but the whole house is for him.

The house that is for His glory and with His strength must have His pattern.
Rom 11 “For by Him and through Him. ” this is true about all things even though its hard to see at times. But this is most clear in the church- plans are his, build through his strength, the church is led by Him and for His glory. This is a key thing to line up with.

What kind of church is Jesus building? Sometimes we can be under pressure to be different. It’s his pattern we want to work to. What we are building is a temple of the Holy Spirit - a dwelling place for God.

John records “if you see me you have seen the father” 1 Jn4:12 says no one has ever seen God. If we look at Jesus we see God. But John does not say that. But if we love one another he abides in us. Where that verse is pointing is that while we love one another we will see him in the church.
We want to build one that becomes a dwelling place or God. We should be able to say to our friends come to our church and you will see God in the love that is there.

Laying on of hands is not a fad we are adding. The presence of God is the essence of what we are building. The Bible ends with “now the dwelling of God is with man”.
The church is the outpost for the end of the world. It’s like the trailer for a film. The film of the great presence of God is coming. We need our meetings to be full of the presence of God. We don’t want to be diverted from anything else.

What kind of House?

1.      Our Worship should focus on Jesus. Everything should line up with Jesus- the corner stone and built on the foundations of the Apostles and Prophets. The local church is governed by Elders and the visiting gifts.

2.      We want to build houses full of Grace – it’s a part of the cornerstone Jesus.1jn4 so as we love one another – he dwells amongst us and we can believe in grace theologically but never experience it in reality. We are not just drawing a plan but actually building it. It means our church should be full of the grace of God – loved unconditionally in spite of all our quirks. We can cover it with love. “Love covers” is an amazing verse. It’s amazing when you read the gospels that sinners loved to be with Jesus who knew no sin. Jesus loved being with them too.
That means it’s not a new system of rules when people come to church but that they are loved and love.
Jesus was different from the other religious leaders – he got angry with the religious leaders who put burdens on them. People often relate with God the way their leaders relate with them. God was seen as a hard task master who demanded a lot from the people. But God is not like that – he made everything and then he provides for us as well all the time not just what is necessary but in abundance. Throughout the Old Testament we see (Ps 23) this. So when Jesus comes his harshest words are toward the religious leaders. When he feeds the 500 its shouting generosity. He pours out blessing upon blessing. So the house is full of grace and we are teaching people that the gospel will change lives.
Often we look at law and grace as opposite. Actually even the law is grace- the difference is its no longer law but people of the spirit. So our great news is they can believe freely and will receive the Holy Spirit who will transform lives. Sometimes our lack of faith in the Spirits ability to change lives makes us feel the need to bring some rules to assist change. So this house of grace is a super natural thing totally dependent on the Spirit. Once we look at law we become judgmental and grace is gone.

3.      Church grows as everyone does their part and we should be good at honouring each one that does their part. 1 Cor 12 talks about insignificant parts that need to be given special honour. Its not enough to have a mighty man of God.

4.      It’s a house of servant leadership being expressed in a team because what it does is it gives people an example of how it works and that we are there for the success of others. Its not a platform for me to look good but to build a house of God - a people who are his very own eager to do what is right. We want to give ourselves to give what Jesus gave himself to.

5.      Jesus clears the temple of things that should not be there. This is a sobering thing for leaders. May we never use the house of God for anything else? May I never use it for personal gain. My house will be a house of prayer for all nations. Each local church will change from being local to international
Have faith for calling your people to pray for situations in the nations. When we line up with God’s purposes and heaven sees it the Spirit comes upon us and uses us.
I pray that we are building lines up with what Jesus is building.

Word of Grace Church is a spirit filled (charismatic), evangelical  ( Born- again) English speaking church that preaches from the Bible as God's inspired Word of life. We are a church community that have people from every part of India and parts of the world. We are here to  put the Great Command and the Great Commission into practice by equipping and releasing every member into works of service.
By Navaz Dcruz - May 09, 2013 No comments:

THE MINISTRY OF THE HOLY SPIRIT – THE LAYING ON OF HANDS 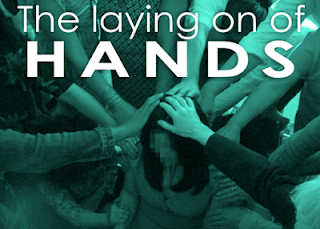 Here is a  short but very practical word that was shared shared by Steve Oliver (at the Regions Beyond gathering in Mumbai)on some vital things we need to pay attention to when we come together as a church. It is a blessing to have the Apostolic gift put some solid stuff into the foundations of the church .

Impartation through the laying on of hands was very much a part of church life but we have settled for a hymn sandwich.

In the early church laying on of hands was a part of life. We need to get it back and contend for it.

Paul writes to Timothy – do not neglect the gift you got through the laying o of hands. When the Elders of a church lay hands, something happens – don’t be little it.

I   So firstly this is something we need to establish in the local church as part of our foundations. It should be a daily routine.
Secondly we are a Word and Spirit church
Some Sundays don’t preach the Word – lay hands. Leaders should model it. Make it a life style I your leadership meetings. As leaders, be eager to receive prayer as well.
Organize well – it shows you are intentional.

II Create an atmosphere where people can encounter God. Do it with faith. You don’t work it up.  it’s a promise from God “ I will pour out my spirit on all flesh”
Worship leaders – lead people into His presence. Explain about the anointing and how it works. Tell people to receive and expect the Holy Spirit.
Testimonies are helpful. Teach people to linger in the presence of God.

III   Those who minister the Word – build it into your message – tell your people that you will pray for them after the message that they can respond to the Word. This creates a hunger and thirst for God.
Look for evidence of the work of the Holy Spirit when you are praying.

IV Establish this as a body ministry so that it is not around a person. There will be different measures according to faith but it will be a body. This builds churches. What you teach is added to experience and it becomes life. It will start small but you will see God move. Amen!
By Navaz Dcruz - May 07, 2013 No comments: