Whats so special about this death? 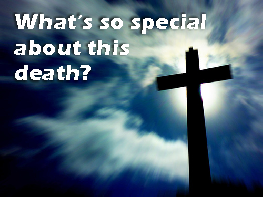 This message was preached at Word of Grace church  by Colin D Cruz on the 8th of April 2012. You can listen to the Audio recording of the message by clicking here .
This April, Christians all over the world celebrate Easter. It is a remembrance of the death and resurrection of Jesus Christ from the dead. Can you imagine what the disciples felt when they saw Jesus who was crucified come to life again?
It was on Feb. 27, 1991, at the height of Desert Storm, that Ruth Dillow received a very sad message from the Pentagon. It stated that her son, Clayton Carpenter, Private 1st Class, had stepped on a mine in Kuwait & was dead. Ruth Dillow later wrote, "I can’t begin to describe my grief & shock. It was almost more than I could bear. For 3 days I wept. For 3 days I expressed anger & loss. For 3 days people tried to comfort me, to no avail because the loss was too great."


But 3 days after she received that message, the telephone rang. The voice on the other end said, "Mom, it’s me. I’m alive." Ruth Dillow said, "I couldn’t believe it at first. But then I recognized his voice, and he really was alive." The message was all a mistake!
She said, "I laughed, I cried, I felt like turning cartwheels, because my son whom I had thought was dead, was really alive. I’m sure none of you can even begin to understand how I felt."
The disciples of Jesus must have felt the same emotions. They had been with Jesus for 3 years. They had lived with him, travelled with him, seen amazing miracles and then he was cruelly taken away, beaten and crucified. His dead body had been placed in a tomb.
They were were heartbroken and scared. But three days later Jesus came to life again. He rose from the dead. Can you imagine what the disciples felt. They must have felt emotions similar to Ruth Dillow, but in Jesus’ case, it wasn’t a case of mistaken death, it was a case of overcoming death.
The resurrection is not a myth or a fairy tale like Goldilocks and the three Bears or Red Riding Hood.  It’s not just a story, it’s history. It is one of the most significant events in history.  It is the cornerstone of our Christian faith. If the resurrection did not occur then Paul says that our preaching and faith is useless and we are still in our sins and we are to be pitied more than all men. 1Cor 15:14, 17,19. So lets look at this fundamental teaching.
Support for the Resurrection
There are over 300 verses in the New Testament that speak about the resurrection of Jesus Christ and many in the Old Testament as well.
1.   Jesus himself predicted his resurrection (Mt. 16:21, Mark 9:9-10)
2.   The Old Testament prophesied it (Ps 16:10, see Acts 2:25-31)
3.   The tomb was empty and the grave clothes vacant. (All the opponents of the resurrection had to do were to produce the body of Jesus to disprove his coming to life again – but they couldn’t!)
4.   Jesus appeared Mary Magdalene, to the other women at the tomb, to the disciples and to over 500 people at one time. (The number of eyewitnesses were many).
5.   The lives of the disciples were completely transformed (Though they fled and even denied Christ at his arrest, later they fearlessly proclaimed the risen Christ)
6.   Men and women across the ages and even today testify to changed lives because of the resurrection of Jesus.
What kind of Resurrection?
The resurrection was not just a coming back from the dead to die again. Jesus brought back to life Lazarus, Jairus’ daughter and the widow of Nain’s son. But these people were raised from the dead  - only to live a few more years and die again. Jesus resurrection was different in that he came back with a new kind of body and life – never to die again. His body was made perfect – no longer subject to weakness, ageing, sickness and death.

The Significance of the Resurrection

Every gospel records the fact that Jesus died on the cross and his body was taken down and placed in a tomb. Those sentenced to die on the cross were left there till they died. After he had breathed his last and given up his spirit, Jesus was taken down from the cross. The cross was empty because Jesus died. The significance of his death is revealed in Rom 4:25 -   “ He was delivered over to death for our sins and was raised to life for our justification. “  Jesus’ death on the cross secured payment for our sins. Rom 5:10  says that “… we were reconciled to him(God)  through the death of his Son.” Heb 2:9 says that “… he suffered  death, so that by the grace of God he might taste death for everyone”.
We are all sinners and our just punishment is death. But Jesus died on the cross in our place. Through faith in him we can have the penalty of our sins removed, we can be reconciled to God and we can escape the eternal death that awaits sinners.
His resurrection from the dead secured our justification. God now looks upon us and declares us “Not Guilty”. Wow – that’s the divine verdict, in our favour – all secured because of the death and resurrection of Jesus.

In Rudyard Kiplings Jungle Book: Mowgli, the man cub, asks the animals what’s
the most feared thing in the jungle. He’s told that when two animals meet on a narrow path that one must step aside and let the other pass. The animal that steps aside for no one would then be the most feared.
Mowgli wants to know what kind of animal would that be? One tells him “It’s an
elephant.”  Another tells him “It’s a lion.” Finally the wise old owl exclaims, “The most feared thing in the jungle is death. It steps aside for no one.”
How true, death has stepped aside for no one. Kings and emperors, religious men and mere mortals. All have succumbed to its mighty power and all have lived in the fear of death. Till one day, death faced defeat in Jesus of Nazareth. Jesus conquered death by rising from the dead.
The tombs of royalty and politicians, religious figures and ordinary people are present in every country of the world. Some are magnificent like the Taj Mahal in India and the Great Pyramids of Egypt. But they contain the mortal remains their owners – left there to decay. Not so with Jesus. His grave could not hold him. His tomb was empty.
What is the significance of Jesus conquering death?
A man and his young son were travelling in a car. Suddenly a bee entered the vehicle and started buzzing around. The young boy shouted in fear. “Dad save me”. The boy was allergic to bee stings as a sting could result in a violent allergic reaction and even death. The dad grabbed the bee in his hand and after a few seconds let go. “Dad, what are you doing” cried the boy. “It’s okay son”, said the father, “the bee stung me, it’s sting has been removed, it’s harmless now”.
1 Cor 15:54-57 says “… Death has been swallowed up in victory”. “Where, O death, is your victory? Where, O death is your sting?” The sting of death is sin, and the power of sin is the law. But thanks be to God! He gives us the victory through our Lord Jesus Christ.
By dying for us and rising from the dead, Jesus took away the sting of death. We don’t have to live in the fear of death. If we have believed in Jesus for the forgiveness of our sins, our last breath on earth will be our first breath in heaven. Like the thief on the cross, we have Jesus reassuring us “This day you will be with me in paradise”. Death has lost it’s sting. Christ has won the victory. The empty tomb proves it. Death for believers is just a doorway to heaven not a final destination.

The gospels of Luke and John record the presence of the strips of linen (for his body) and the burial cloth (for his head). Jesus was embalmed according to Jewish customs with about 34 kilograms of spices. (John 19:39-40). However on the third day when Peter and John ran into the empty tomb, all they saw were the strips of linen and the burial cloth folded up by itself. The empty grave clothes prove that Jesus’ body was not stolen by anyone – a story concocted by the chief priests (Mt 28:13-15) No human being, either disciples, or grave robber or Jewish authorities, would have gone through the trouble of taking of the grave clothes and stealing the body. Instead Jesus, passed through the grave clothes and left them behind like a butterfly leaving its cocoon behind, and rose to new life. The empty grave clothes signify that Jesus passed through the grave clothes and is alive and nail the lie that his body was stolen.
Jesus is risen. Hallelujah He is risen indeed.  He longs to have a relationship with you and offer you his gift of forgiveness and eternal life.
If you are not yet a believer, then after considering the biblical evidence - believe. The world’s most successful defense lawyer in the world is Sir Lionel Luckhoo,  who succeeded in getting his 245th successive murder charge acquittal by January 1, 1985. That’s an absolutely astonishing feat that nobody in the world has come close to replicating -- 245 murder trials in a row. To have such outstanding success, not only must he have had a razor sharp mind but also tremendous analytical skills so that he could demolish what may on the surface to be an air-tight case. And he must also be a world-class expert on what constitutes reliable and persuasive evidence.
During his own spiritual journey, Luckhoo turned his expertise to the question of whether the resurrection of Jesus Christ fits the test of legal evidence. And here’s the conclusion he ultimately reached: "I say unequivocally that the evidence for the resurrection of Jesus Christ is so overwhelming that it compels acceptance by proof which leaves absolutely no room for doubt."
And yet here’s the most successful attorney in the world applying the test of legal evidence to the case of Jesus Christ and concluding with absolute confidence that His resurrection is reality. And then Luckhoo did the most logical thing he could do: he gave his life to Christ.


If you have not repented of your sins and believed in Jesus’ death and resurrection, I urge you to believe and put your trust in him.
To those who have already believed in Jesus, when faced with the resurrected Jesus our response should be similar to the first disciples.
They first worshipped Jesus, then they obeyed him and finally they went into all the world an preached the good news.
Will you do likewise. Remember he is risen, he is risen indeed.
Colin D Cruz
April 2012