When Jesus is NOT in your boat | Colin D 'Cruz 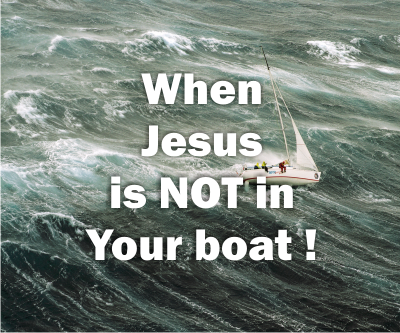 This message was preached by  Colin D Cruz at Word of Grace Church  Pune, on the 12th of October 2014. You can listen/download the  audio by clicking here

Have you ever been in a situation when you have asked where God in this is? You may feel I am following God, then why am I in this mess?

This happened to Jesus’ disciples as well. They were obeying him and they fell in a mess.
Matt14: Jesus from obscurity came to great popularity. The blind could see, the lame could walk the dead were being raised. He gave teaching with great authority.

This now is one of the greatest miracles recorded in all the four gospels i.e feeding the 5000. Actually it was more than that when you count the women and children!!
Matt14:18 -20 they all ate and were satisfied. Amazing!!! Not only that, three were 12 baskets of leftovers!!! Why is this miracle so great? Because it involved 1000s of people in one instant. This and the resurrection are mentioned in all four gospels.

When the people saw this the people wanted to make him king (Jn 6:16) “Surely this is the prophet…” Jesus withdrew to a mountain by himself.
He was at the height of his ministry.

Matt14:22 The disciples were told to do something and they obeyed Him. We think only good should follow when we obey. But sometimes there are challenges.
V23 In their obedience it was not smooth sailing. Suddenly a squall arose. There was no Jesus in the boat this time. Maybe you feel like that. In a previous situation you could see Jesus but this time you are asking “where is Jesus?”

Where is he? He was praying on the mountain. Today He is ever interceding for us.
Heb 7:25Therefore he is able to save completely those who come to God through him, because he always lives to intercede for them.

They struggled for a long time. Who sent them? Jesus told them to go. Sometimes God allows storms in our lives. He does not send them but he allows them.
Mt. 14:25 He does another miracle. He walked on water. The disciples were terrified but Jesus immediately spoke to them.
Hundreds of times we know that when angels and God appeared to man they always comforted them with these words: Don’t be afraid”. This is what God would say to you today “don’t be afraid”

At 3am in the morning Jesus appears to them walking on the water and Peter wants to walk too. Jesus bids him “Come!”. And he does!!  This is the second miracle.Then he looks at the waves and he loses faith and begins to sink. When we look at our problems and take our eyes off Jesus, we can lose faith and begin to sink. Peter makes the shortest prayer “Lord save me”
Even if you don’t have a solution you need to magnify Jesus and the problem will become small.
The twelve spies; ten saw giants but two saw opportunity and promise.

The wind finally dies down. That’s the third miracle.
V33. Those in the  boat worshiped Him saying “Truly you are the son of God” Mk 6:52
They had seen the great miracles of Jesus but they still had doubt. It’s only after this revelation that their doubt was removed.
Sometimes we have to go through a great trial to get greater revelation about God. Sometimes we go through situations for greater revelation and we now know him not just intellectually but experiential.

So whatever your situation, remember Jesus is with you in the storms. He will challenge you to greater depths of faith.