The greatest descent of all | Colin D'Cruz 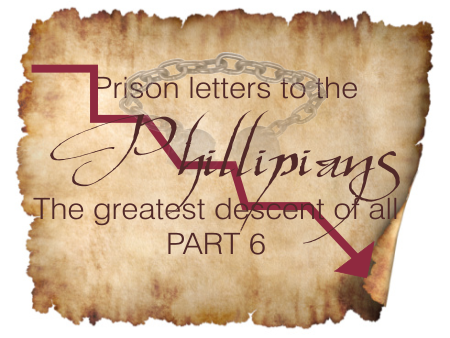 This message was preached by Colin D Cruz at Word of Grace Church on the 8th of Feb 2015. To listen/download the audio please click here.

Phil 2:5-11
This is one of the greatest theological chapters I the whole of scripture. It speaks of Jesus’ the person, his deity, humanity, humility, death and  resurrection, supreme reign acceding  and exaltation.

In just a few verses Jesus character is portrayed so beautifully. We will look at verse 6-8 to day

The Bible is full of theology but here Paul is not giving them some abstract thesis on God. It’s in context. Paul is urging them towards unity and the way is humility – to think of others better not to have selfish ambition.  And by the way the way to do this is to consider Jesus who was the embodiment of all this.

The key word is “your attitude should be the same...”

V6. Who being the very nature God – What is Paul saying. WE need to look at some Greek words here.
Greek= Morph – very essence – inner core is that He is God. Eg) a person born as a male is in essence male. As he grows his appearance changes but not his malehood.
Jesus always existed. He did not come into existence 2000 years ago but right in the beginning Jn1:1,14.

2. He did not consider equality with God something to be grasped. Greek = Isos – 2 equal. Jesus and God are equal. God in essence therefore equal with God not a lesser form.

Then it lists down 7 steps on how Jesus humbled himself.
1. Did not consider equality something to hold on to. He did not throw his weight around.
2.Although he was fully God he did not take the privileges of being divine. He did not give up his essence but he laid  aside his divinity. He lived like a normal man but there were flashed of his divinity eg) the mount of Transfiguration.
3.He gave up his independent authority. I’ve not come to do my will but the will of the father.
4.He was obedient to the point of death. He emptied himself of his divine power.
5.He set aside his omniscience. As a child he asked questions. He grew in wisdom and stature. However, there were times when he used it eg) with Nathaniel.
6.He emptied himself of his riches. Although rich for our sake he became poor.
7. He emptied himself of his relationship with the father. He gave it up on the cross. The Father turns his face away.

He took the nature of a servant. He became a servant – the king of the universe becomes a servant King. Isaiah points out to this. John 13. He washed the disciple’s feet. He did not come to be serve but to serve and give his life as a ransom for many. This is the highest thing. The world twists this to the more people that serve you the greater you are. Kingdom culture says the more people that you serve the greater you are.

HE took the form /shape of a man. Greek = schema/shape. Why? In order (Col1:22) to reconcile you to God. Because Jesus became a man ( Gal 4:4) that we could be reconciled . Jesus had to be born a baby. This was to purchase our salvation. Hebrews2:14 He was hungry, he cried etc.
Heb2:17 in every way He was made like us.
The only way Heb4:15 he is different from us is that he is without sin.

Being found in appearance as a man i.e his divinity was hidden so people only regarded him as a man. So only through eyes of faith could you see his divinity? This was a part of his humility.

He became obedient to death. This is going down, down, down. He agrees to die in our place. The eternal God agrees to die!! The world tries to appease their God. But here He came to suffer and die for us. Jesus appeased the father on our behalf.
We can become obedient for certain things but here Jesus obeys to the point of death!! Even in his death there is humiliation.

Not just dying – even death on a cross. It was a not a bullet to the head but the worst kind of death. Deut 21:23 one who dies on a cross is cursed. The God of the universe was killed by the cruelest from of death.

Jesus gave up all this. So Paul is saying look at the examples of Jesus so be united, humble yourselves. This is a pattern for us to follow. We too will be exalted.

What do we hold onto? Position, education, ego, status, leadership role in church etc.
But what Jesus wants is humility and servant hood

Are we holding onto to something? Am I willing to become in my essence /very nature a servant and not just in appearance ?
This is radical and opposite of the world’s values.
This is the blue print for our life. Let’s embrace it. Amen!!