The Power Series - 2 The power of Pentecost | Colin D Cruz 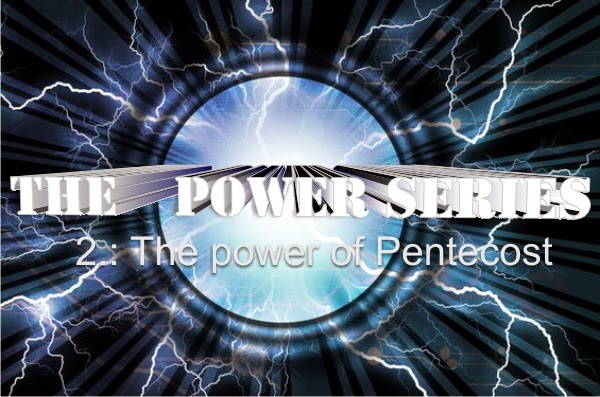 This message was preached by Colin D' Cruz at Word of Grace Church on the April 12 th 2015. To listen/download the audio please click here


Easter is the greatest day in History- we see how Jesus died and gave up his life for our sake. Then on the third day, he rose from the grave. Now, put yourselves in the shoes/ sandals of the disciples. What would they have felt when they met Jesus rise from the dead. What was their life like? These were the same disciples who deserted Jesus. Jesus was arrested, falsely accused and finally sentenced to die on the cross.

Now the disciples are in hiding. Let’s look at 3 instances to tell us what the disciples were doing after they came to know that Jesus is alive.

1.      John 20:19- 20 “On the evening of that first day of the week, when the disciples were together, with the doors locked for fear of the Jewish leaders, Jesus came and stood among them and said, “Peace be with you!” After he said this, he showed them his hands and side. The disciples were overjoyed when they saw the Lord”. We see that they were fearful. They are scared that their master of 3 years is now dead and it is their turn. Through the locked doors, Jesus appears in his resurrected body to them. When they see Jesus they are overjoyed. We can be a group of Christians like that- secret Christians. We know Jesus is risen but we are fearful in front of others to proclaim the Gospel or be open about our Christianity.

2.      John 20:24 represents another group of Christians like Thomas. He says that “Unless I see the nail marks in his hands and put my finger where the nails were, and put my hand into his side, I will not believe.” He felt, seeing is believing. Many people need proofs. But what does Jesus think about it? Next week the doors were still locked. They were still fearful. Then he asks Thomas to check and asks him to stop doubting and believe. This morning, we have not seen the risen Jesus, but we have his word, his activities in people’s lives, and we can believe. Here again we see surprisingly, that the disciples were fearful.

3.      In John 21 Jesus has appeared to them twice already. Said many things about the resurrection. Then in verse 3 we see Peter saying, ““I’m going out to fish,” Simon Peter told them, and they said, “We’ll go with you.” So they went out and got into the boat, but that night they caught nothing.” In the beginning when Jesus called them, they left their nets because he said that he will make them fishers of men. But now they have gone back to fishing. Their faith was not strong enough. They do not catch any fish. Jesus calls them from the shore and asks them to throw their nets to the right side of the boat and there they suddenly  found a large number of fish. This must have been déjà vu for the disciples. Then they recognized him. You can have some Christians who have heard the good news but are caught up with their own life- their own work, etc.

If we fast forward to Acts 4-these same group of Christians who were fearful behind locked doors, suddenly, their lives are transformed. They start preaching and healing outside Solomon’s temple. Acts 4:8- “Then Peter, filled with the Holy Spirit, said to them: “Rulers and elders of the people!”. By the power of the Holy Spirit he answers before the high priest, and all the people who put Jesus to death. The disciples began to be questioned- and Peter being filled with the Holy Spirit does this. They do this over and over again in public.
From being afraid and not knowing what to do with their lives, they now have purpose and boldness-

Even after they have been beaten, they don’t care. They just go ahead and preach. What caused this difference? The Holy Spirit! The resurrection was the beginning. There is more to the resurrection other than Jesus rising from the dead. Many Christians are at that stage. They have put their trust in Jesus and received forgiveness for their sins. But they are living like the disciples lived before Pentecost- living fearful, doubting, or busy lives and missing out on what God has called us to do.

Jesus was with the disciples for more than a month but it was only the third time that he met them that something went into them. Jesus gave them many convincing proofs that he has risen from the dead. He spoke to them about the kingdom of God. He told them that he is going to be seated at the right hand of God that we are the agents of the kingdom. He gave them other instructions too. He asked them to wait till they were clothed with the promised Holy Spirit.

One of the things that the baptism of the Holy Spirit does is fills us with an assurance of God’s love for us. DL Moody preached a lot but was not baptized with the Holy Spirit. When he did receive the Holy Spirit, there was a renewed power in his ministry. In Luke 24:45- 49 Jesus appeared to the disciples and says to them “This is what is written: The Messiah will suffer and rise from the dead on the third day, and repentance for the forgiveness of sins will be preached in his name to all nations, beginning at Jerusalem. You are witnesses of these things. I am going to send you what my Father has promised; but stay in the city until you have been clothed with power from on high.”

That’s the instruction. That’s Jesus telling you this morning that we are to be His witnesses. Do you know the difference between a witness and an advocate? There is much more credibility in what the witness says.