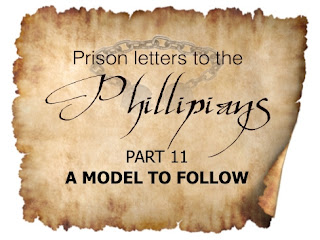 This message was preached by Colin D Cruz at Word of Grace Church on June 28th 2015. To listen/download the audio please click here

When you think of model, who or what comes to your mind? Pop stars etc. are adored but would you want their life style? As we come to God’s word this morning, let’s look at whom we can emulate.
We will be looking at Phil 2:19- 30

We have three models in the passage. Three men are mentioned. Paul, Timothy and Epaphrodites. They are worthy of imitating. They were not well known those days. Today they would not make to the Vogue Magazine.

In chapter 2: 1-16 Paul is presenting the greatest model who is Jesus. We can look at Jesus and say that it is impossible to become like Him. One day we will.

Sometimes when we read the Bible we may think it’s impossible to do. People thought the mile could not be run under 4 minutes. In 1954 Rogen Bannister did it. Once he did, people realized that it can be done and record keeps getting broken now.

So we think that a standard of Christianity mentioned in the Bible is hard to attain. But let’s look at Timothy. What can we learn from him? Who is Timothy?

Paul is writing to the Philippians under house arrest. Paul had planted this church. Now he is chained to a Roman guard. He is not concerned with this but them. He wanted Timothy to go to them and strengthen them. In that context he says about Timothy that apart from him, there is no one else who is interested in their welfare.

In Acts 14:8- Timothy is a young lad. Paul and Barnabus were out on their first missionary journey, at Lystra. There was a crippled man who was listening to Paul preach. Paul heals him in Jesus name. In verse 11, people thought they were gods and wanted to sacrifice to them. In verse 15, they had a problem stopping the crowd from doing this. Then the Jews turn the crowd against him. So from hero to fugitive, he is beaten and left before being dead. But he recovers and goes back to the city. The next day, he leaves for Derby and the same thing happens.

In Acts 16:1- this is their second missionary journey they come to Lystra again. Timothy is a convert who comes in contact with Paul. 2 Tim 1:5  I am reminded of your sincere faith, which first lived in your grandmother Lois and in your mother Eunice and, I am persuaded, now lives in you also. So Timothy comes from a believing family and in 2 Tim 3:15 it says how from childhood he had known the scriptures.

In 1 Corinthians 4:16- he will remind you of my way of life in Christ Jesus. This is a high commendation.

1. He modeled after Paul- Jesus is our model but do we have a flesh and blood model to emulate and be mentored? We are not perfect but we can learn things from people. My Mother in Law has qualities that I can emulate- punctuality, committed to the church prayer meetings, hospitality. My mother prays for 500 people every day. So look around for whom you can follow. When I say this, I mean godly qualities, not their personality.

2. He had a sympathetic heart. Phil 2:20- he was genuinely concerned in people. Are you genuinely concerned for people in the church? Do we invest time, money, hospitality into the church?
There are several people unwell or not in church today. Send them a message and express love.
In Phil 2:221, Paul says that people are looking out for their own interests. We have received an amazing gospel. Can we look out for others’ interests? It’s love in action.

3. Timothy was sacrificial in what he did. He left his family for the3 sake of the gospel. How many do this?
In Hebrews 13:22- we see that his sacrifice involved even going to prison. Wow! So we see the life of Timothy. His work was useful and proven. Phil 2:22- this was not for one month but 2 decades of faithful service. He was submitted and worked alongside.

Are you aiming for long term provenness? Can we serve God over the long haul? Can we devote ourselves to something? Take on something that you can do long term
We need a model to follow and also be a model. I pray that something of that spirit would come upon us. We would sacrifice and serve over the long term. May we be found running the race till we are 80+. There is no retirement in the kingdom of God.