The context of the call| Justin J 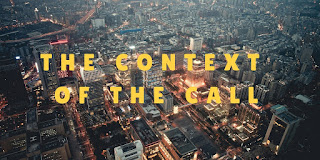 We are here for a definite purpose to serve God's purpose in our generation.

Acts 13:36 says about King David- “Now when David had served God’s purpose in his own generation, he fell asleep; he was buried with his ancestors and his body decayed.”
David served his purposes in his own generation. The book of Judges is full of people who served His in their own generation.
Jud 3- Othniel and Deborah- There was peace when they ruled. Today we will look at a character who served God in his generation. This person is Gideon. The context, the call, the challenges and the conquest
The context of the calling:
In Judges 4 Deborah delivered people from their enemies. In Chapter 6 Israel was under the rule of the Medianites and the Israelites were fearful. They were farmers and the medianites would attack and take away everything. This was the context.

Judges 6:1 says, because people disobeyed God and did evil. Today is the same. There is so much killing and evil. The Lord allowed this so that they would turn back to him.

God was very much a part of the context. There was pain and suffering. People were totally drained. God heard their cry. People are groaning and crying today. There is so much noise today that drowns out peoples cries. Jesus was in crowded noisy places yet He knew who touched him.

In the busyness of life can we hear people’s cries and the hurt that people face? This is the context in which we live.

In Exodus, we read about Moses. People were under slavery and God heard their cry and Moses comes into the picture. The same thing happens with Gideon. God was preparing him in that context.

We could have a ‘don't-care’ attitude. I'm reminded of Esther. The Jews were threatened. Word comes to Esther and she is reminded that she was born for such a time as this. If we don't act, God can use someone else.

If the context does not pinch us then we can't play a role in fulfilling God's purposes in our generation. When did we last get affected by the troubles around us? Jesus was moved on compassion when amongst the people. Jesus wept over Jerusalem.
This is the context for Gideon too in Judges 6

Q. What does responding to God involve?
In Verse 11-12. Gideon was threshing wheat in a wine press. It shows that the quantity of wheat was less. He was doing something that should have been done in the open.
In this fearful context, God calls him a mighty warrior. God looks at us as people who can be strong and courageous. When God calls us to serve him he looks at us as what we will become and not what we are today.

Samuel was told to anoint a king from the house of Jesse. All the sons walk by but these were not God's choice. It's the last one that God chose to be king of Israel.God has a rating. He calls us mighty warriors.

Gideon in verse 13 does not accept this. He felt the situation hopeless. We might feel like this too. But God comes in. In Verse 14 God still commissions Gideon. God is sending him and he is not going alone. Give your nothing in his hand and he will make something out of it. The victory is already assured. Gideon is still not trusting.

We often think God has made a mistake by choosing us. But that is not true. Be assured you have a purpose.

In Verse 16, he assures Gideon-  Surely I will be with you. God's companionship is guaranteed with us. God assures his presence with us through the Holy Spirit.

Q. Are you discouraged today?
Remember God will be with us to the end of the age. Surely we will make an impact.