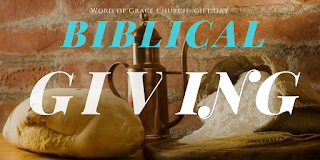 Sometimes in life, we are waiting for a breakthrough- maybe in the area of health, finances, etc. most people are looking for it- to see something supernatural. Most people would say that breakthrough is related to finances. We will look at an account in the Old Testament where there was a lady who wanted a breakthrough. These things are written as an example for us.

1 kings 17- there was a lady who lived in Zaripah. She was a widow, she had a son and they didn’t have enough food to eat. She just had a little flour and oil.  After that, they had nothing else. Do you think she needed a breakthrough.

Maybe you are also in a bad situation this morning. Let’s look at what happened.
This is the background- 1 Kings- Ahab received a word from God through Elijah that there won’t be any rain till he orders it. Then, Elijah was fed and looked after by ravens. They brought him food.

Then God asks him to go to Zaripah where he commanded a widow to provide for him.
“Some time later the brook dried up because there had been no rain in the land. 8 Then the word of the Lord came to him: 9 “Go at once to Zarephath in the region of Sidon and stay there. I have directed a widow there to supply you with food.” 10 So he went to Zarephath. When he came to the town gate, a widow was there gathering sticks. He called to her and asked, “Would you bring me a little water in a jar so I may have a drink?” 11 As she was going to get it, he called, “And bring me, please, a piece of bread.””

A piece of bread was too much to give for her.

““As surely as the Lord your God lives,” she replied, “I don’t have any bread—only a handful of flour in a jar and a little olive oil in a jug. I am gathering a few sticks to take home and make a meal for myself and my son, that we may eat it—and die.”

So, she needed a breakthrough. God provided her with an opportunity for a breakthrough. Elijah asks her to first make a small cake of bread for him. Here is the test. First, give me a piece of bread. Then he gives her the promise- “For this is what the Lord, the God of Israel, says: ‘The jar of flour will not be used up and the jug of oil will not run dry until the day the Lord sends rain on the land.”  Elijah asks her to give him the little. The Lord is going to give you enough to sustain her till the rain comes. The widow could have asked for him to first bless her. When you have stacks of bread at home, giving something out of that is no big deal. Giving when you don’t have it, that’s faith. This widow had faith.

Elijah- God would have provided by other means. It wasn’t Elijah who was in need. It was the widow’s opportunity for breakthrough. The miracle took place! They ate and survived for a long time. They had abundance for a couple of years. That wasn’t the end of her blessing.

In Verses 17-24- “Some time later the son of the woman who owned the house became ill. He grew worse and worse, and finally stopped breathing. 18 She said to Elijah, “What do you have against me, man of God? Did you come to remind me of my sin and kill my son?” “Give me your son,” Elijah replied. He took him from her arms, carried him to the upper room where he was staying, and laid him on his bed. 20 Then he cried out to the Lord, “Lord my God, have you brought tragedy even on this widow I am staying with, by causing her son to die?” Then he stretched himself out on the boy three times and cried out to the Lord, “Lord my God, let this boy’s life return to him!” The Lord heard Elijah’s cry, and the boy’s life returned to him, and he lived. Elijah picked up the child and carried him down from the room into the house. He gave him to his mother and said, “Look, your son is alive!” Then the woman said to Elijah, “Now I know that you are a man of God and that the word of the Lord from your mouth is the truth.””

If the woman turned Elijah away, her son would have died and there would have been no resurrection. She received in kind, sowed in bread, and received bread, but also breakthrough in her son’s life.

If you’re looking for a breakthrough, give sacrificially and generously.

Q. How should we give?

In everything we do, we want to be biblical. We can give to just fulfill an obligation. This money goes towards uplifting the poor, meeting the needs of the poor, education, preaching the gospel, to  fight human trafficking, to meeting our own needs, leadership training, development and making disciples, strengthening marriages, etc.

Q. So how do we give biblically?

1.      Give passionately- passion has everything to do with giving. John 3:16-God is a giver. Everything we have comes from God. He gave his son to die for us, because of love. Our giving needs to be accompanied with much love. In 1 Cor 13:3- “If I give all I possess to the poor and give over my body to hardship that I may boast, but do not have love, I gain nothing.” Love, that’s the way to give.

2.      Give proportionately- The amount is not as important as the proportion. It’s how much you’re keeping back. For some people, 10000 rupees may seem like a big amount. But it depends on who is doing the giving. Mark 12:41- 44 “Jesus sat down opposite the place where the offerings were put and watched the crowd putting their money into the temple treasury. Many rich people threw in large amounts. But a poor widow came and put in two very small copper coins, worth only a few cents. Calling his disciples to him, Jesus said, “Truly I tell you, this poor widow has put more into the treasury than all the others. They all gave out of their wealth; but she, out of her poverty, put in everything—all she had to live on.” The key thing here is that Jesus was watching and keeping track of all that was happening. Imagine a father taking his son out to McDonalds, orders a nice burger, fries and coke. Then the father goes and asks for a French fry and he says, no! We are all born inherently selfish. Kids do that, saying it’s mine. But the father is the source of that wonderful meal. The child has not realized that the father can just take it away and can buy himself ten such things without thinking. The father is asking to teach the child to give. So let’s give proportionately.

4.      Give Sacrificially- David is offered by Araunah to take his stuff and offer to God. But David says, I can’t offer what does not cost me anything. Ask yourself, is this costing me? That is the attitude with which we give. Those who sow in tears will reap in joy. There is a cost in giving. The Macedonian churches, their extreme poverty welled up in riches. How does that happen?

5.      Give in faith- Give believing that God will do something with my giving. In the Bible there is a principle of sowing and reaping. If you want to get bananas, sow bananas, to get apples, sow apple seeds. Genesis says, as long as the earth endures, sowing and reaping does not change. As you sow money, you get back money and you get much more! It is an act of faith. Paul reminds us this- whoever sows sparingly will also reap sparingly and whoever sows generously, you will reap generously. God promises to give us abundantly.

1 tim 6:18-19- Paul says, talking about the rich, “Command them to do good, to be rich in good deeds, and to be generous and willing to share. In this way they will lay up treasure for themselves as a firm foundation for the coming age, so that they may take hold of the life that is truly life.”

Q. How do we get our money from earth to heaven?

Western union? What is the IFSC code of heaven? God says, as you give to God’s work, you will lay up for yourself, treasures in heaven. It is more blessed to give than to receive. Giving is like breathing out. You can keep breathing in but you need to breath out to be happy.

Word of Grace is an Evangelical (Born Again),  Spirit filled (Charismatic), Reformed, English speaking church in Pune that upholds the Bible as God's inspired Word for life. We are a church community that have people from every part of India and parts of the world. We are here to put the Great Command and the Great Commission into practice by equipping and releasing every member into works of service. To know more about us please log onto www.wordofgracechurch.org.
By Las V - November 29, 2016