The heart of the Father| Colin D 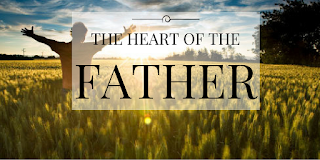 We know we have a heavenly Father when we are in Christ. We want to pattern our lives according to the Godly Father.
Q. What is a heavenly Father like? Luke 15 contains 3 parables which speaks about what the Father is like.
1.      Parable of the lost sheep:   ““What man of you, having a hundred sheep, if he has lost one of them, does not leave the ninety-nine in the open country, and go after the one that is lost, until he finds it? 5 And when he has found it, he lays it on his shoulders, rejoicing. 6 And when he comes home, he calls together his friends and his neighbors, saying to them, ‘Rejoice with me, for I have found my sheep that was lost.’”

Q. Have you ever lost something and then find it?
Jesus was saying, in verse 7- “Just so, I tell you, there will be more joy in heaven over one sinner who repents than over ninety-nine righteous persons who need no repentance”
Here we see the Father’s heart. God is rejoicing even when one person turn to him.
It is important when we read the Bible that we understand the context. Why is Jesus sharing these parables. In verse 1- “Now the tax collectors and sinners were all drawing near to hear him.” these sinners were outcasts in those times. The Pharisees and Scribes kept the law scrupulously. They memorised the first 5 books of the Bible. They did everything according to the law. They could only walk so much on the Sabbath, if you walk further, it is work. In Israel there is a Shabath lift where you don’t even press a button.
Tax collectors were not like our Income Tax officers. Rome governed most of the known world. They built roads because they sent soldiers to any part of the empire on these roads. They paid for these soldiers by taxing the people. They appointed Tax Collectors for this purpose who taxed the people more than they were supposed to, and pocketed the next. The Pharisees saw that Jesus was eating with these kind of people. Sinners, were maimed and with physical deformities because they were physically deformed. Other type of sinners were prostitutes and people who did jobs no one else wants to do.
Jesus was eating with people like this. In India we have this situation with caste system. Jesus broke down all barriers. He preached to them, ate with them and went to their homes. He explains the Father’s heart to the people who were questioning this behaviour of his. He repeats in verse 10- “Just so, I tell you, there is joy before the angels of God over one sinner who repents.” God is looking for people who will repent.
2.      Parable of the lost coin: “Or what woman, having ten silver coins,[a] if she loses one coin, does not light a lamp and sweep the house and seek diligently until she finds it? 9 And when she has found it, she calls together her friends and neighbors, saying, ‘Rejoice with me, for I have found the coin that I had lost.’ 10 Just so, I tell you, there is joy before the angels of God over one sinner who repents.””

3.      Parable of the prodigal son: “There was a man who had two sons. 12 And the younger of them said to his father, ‘Father, give me the share of property that is coming to me.’” What is he asking for? His inheritance before the Father dies. It is insulting, saying you don’t matter, just give me what I will get when you die. The son got the inheritance- which was land, cattle, etc. Then, this son sold everything and leaves his father’s house. He squanders it on  wild living.
a.      The son was doing a wrong thing- sometimes, God can let us continue in our wrongdoing for our season till we come to the end of ourselves. The Israelites kept worshipping idols. The heart was sinful. God let them continue in their sin till they were taken captive by the Assyrians and Babylonians where they were surrounded with idolatry. So if you notice in the New Testament the 4 gospels have no mention of idolatry. They had come to an end of themselves and threw idolatry out.

b.      The Trajectory of sin: In verse 14, after he spent everything, there was a severe famine. He spent everything irresponsibly. “And when he had spent everything, a severe famine arose in that country, and he began to be in need. So he went and hired himself out to one of the citizens of that country, who sent him into his fields to feed pigs. And he was longing to be fed with the pods that the pigs ate, and no one gave him anything.” He had great privileges in his Father’s house. To the Jews, pigs are unclean and to say they have to feed pigs is disgusting. He is willing not just to feed the pigs, but to eat what they were eating.

This is a picture of the trajectory of sin. Any sin we indulge will lead us to the rock bottom. But the good news is coming. There is a point in time when we come to our senses. We ask ourselves, what am I doing?

c.      Repentance: “I will arise and go to my father, and I will say to him, “Father, I have sinned against heaven and before you. I am no longer worthy to be called your son. Treat me as one of your hired servants. And he arose and came to his father.” This is the act of repentance. That we turn from our sin and turn to our Father.

d.      Father’s response- if your son behaved this way, how long would you lecture him? The heart of the Father is this- “But while he was still a long way off, his father saw him and felt compassion, and ran and embraced him and kissed him” Even though the son turned away, the Father’s eyes looked out for him. He doesn’t say, “Let him come here and I’ll talk to him”. It is not respectable to run for the patriarch. But he was overcome with joy. He can’t wait. At this point, the Pharisees would have freaked out.

e.      Restoration: Verse 22-23 “Bring quickly the best robe, and put it on him, and put a ring on his hand, and shoes on his feet. And bring the fattened calf and kill it, and let us eat and celebrate” They were restoring his position and celebrating his return.