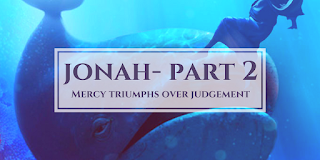 This message was preached  by Colin D'cruz at Word of Grace Church on September 3rd, 2017. To listen/download the audio please click here.

Last week we started looking at this amazing story of Jonah. God spoke to Jonah to speak with the city of Nineveh and ask them to repent. Assyrians, the capital of which is Nineveh is the enemy of Israel and they were cruel. They boasted in their cruelty.

Jonah wanted to see the destruction of this city and didn’t want Nineveh to repent. So he goes in the opposite direction. So God sends a storm to get Jonah’s attention. Jonah is thrown into the sea and the sailors realise that Jonah’s God is the real God. So they become believers and God uses Jonah’s disobedience to bring salvation to unbelievers.

Then a fish swallows Jonah and Jonah stays in the belly of the fish for 3 days and 3 nights.
1.      God provided a fish
2.      God spoke to the fish and Jonah ended up where he needed to go.

Jonah got a second chance. Sin can take different forms: it can be running away from God and it can be staying where we are and not doing what God wants us to do.

God used the wind waves, storm and fish to bring Jonah on to the right track. Jonah arose and went to Nineveh according to the Lord. Nineveh is one of the biggest cities then.
Jonah 3:4-5 “Jonah began by going a day’s journey into the city, proclaiming, “Forty more days and Nineveh will be overthrown.” The Ninevites believed God. A fast was proclaimed, and all of them, from the greatest to the least, put on sackcloth.”
Can you imagine going to a place like North Korea, and proclaiming this message?

1.      We see the exceeding sinfulness of the world- with hurricanes taking place all over the world, people are looting in this situation. The sinfulness of man is terrible. Let’s look at our own hearts. But Jesus doesn’t want to leave us there.
2.      Mercy of God- Even in the declaration of judgment, God wants to save them. 2 Peter 3:9- god wants people to come to repentance.  People respond to this message. The Mercy of God causes repentance.
a.      1 kings 21: 25- “There was never anyone like Ahab, who sold himself to do evil in the eyes of the Lord, urged on by Jezebel his wife. 26 He behaved in the vilest manner by going after idols, like the Amorites the Lord drove out before Israel” the strongest man was Samson, the wisest man was Soloman and the most wicked man was Ahab. But when he repented, this was God’s response- “Then the word of the Lord came to Elijah the Tishbite: 29 “Have you noticed how Ahab has humbled himself before me? Because he has humbled himself, I will not bring this disaster in his day, but I will bring it on his house in the days of his son.”
b.      Exodus 34:6- “And he passed in front of Moses, proclaiming, “The Lord, the Lord, the compassionate and gracious God, slow to anger, abounding in love and faithfulness, 7 maintaining love to thousands, and forgiving wickedness, rebellion and sin.”
c.      Lamentation 3:22 “God’s mercies are new every morning”. God always has mercy o those who repent. God responds to humility. He changed his mind in Ahab’s case, he changed his mind in Nineveh’s case. So even for our nation, we need to humble ourselves in front of God and ask for repentance. We see that he has had mercy on the evil nations- what about our nation of India? There is such darkness in our land. We need to value human life in the image of God. we need to stand in the gap and repent like the Ninevites did.

3.      Repentance: we are here because of the Grace of God. we need to pray for our fellow Indians to come to true personal and national repentance.
Q.     How do we repent?
a.      Change in mind: Sometimes when we go in the wrong direction, we need to turn around.
b.      Change in Action- to stop doing the wrong thing and start doing what you should be doing
c.      Humbling ourselves- in every situation, they put on sackcloth and fasted and humbled themselves. Sackcloth is a gunny bag. Matthew 6:16- “When you fast, do not look somber as the hypocrites do, for they disfigure their faces to show others they are fasting. Truly I tell you, they have received their reward in full. 17 But when you fast, put oil on your head and wash your face, 18 so that it will not be obvious to others that you are fasting, but only to your Father, who is unseen; and your Father, who sees what is done in secret, will reward you”  Don’t make a show of your repentance. He talks about prayer the same way. He asks us to pray privately. These are all ways in which we can humble ourselves.

Let’s be a people who are crying out for our nation. Let’s pray for the mercy of God and not the judgment of God. India has 1 mil people joining the workforce every year. If our economy doesn’t pick up there could be anarchy. So we pray for that.