All in the Family- Job | Chris B 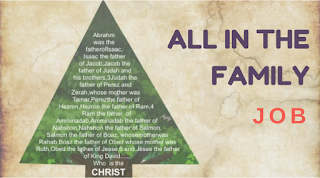 We are going through the Genealogy of Jesus. We have gone through Abraham and Isaac. But today we are going to look at Job. The foundations of our faith are learned through these patriarchs. On Tuesday, we will be celebrating the 500th anniversary of the Reformation. We need to let the Word of God reign in our lives. All scripture is God breathed and useful. So we are going to go through these books of the scripture that we might not to as familiar with it.

John Rogers- was born in England in 1500 and he was educated in Cambridge and entered the priesthood. He started to come to know that some of the positions of the church, like indulgences was not in keeping with the scripture. So he quit the priesthood and went to Holland where he was studying and learning more. There he came to know William Tindale. Tindale translated Old and New Testaments to modern day English. People didn’t understand latin and the truth was not accessible to them. But he gets arrested. He gives the books from Joshua to Chronicles to John rogers and he gets them published. He sneaks it into England and asked Henry VIII if he would authorise this English bible. So people could know God truly.

Catholics believed that Jesus 99% of the work, and we do 1% in our salvation. But the reformers said that this would take away from the work of Jesus on the cross. They treasured the word of God and gave their lives for the truths that we now enjoy. When John Rogers studied the word, He came to know the truth and that’s how the change took place.

This morning we are going to go through the story of Job having seen how significant the word of God is for us. But we will do it in story form to help those who are not literate.

After Adam and Eve were banished from the garden, they had children. They were all living under the curse. Many generations down the line, there was Job. Job was wealthy, godly, and blessed. Because Job always tried to do the right thing, he offered sacrifices in the place of his children.

Skin for skin!” Satan replied. “A man will give all he has for his own life.  But now stretch out your hand and strike his flesh and bones, and he will surely curse you to your face.” The Lord said to Satan, “Very well, then, he is in your hands; but you must spare his life.” So Satan went out from the presence of the Lord and afflicted Job with painful sores from the soles of his feet to the crown of his head. Then Job took a piece of broken pottery and scraped himself with it as he sat among the ashes. His wife said to him, “Are you still maintaining your integrity? Curse God and die!” He replied, “You are talking like a foolish[b] woman. Shall we accept good from God, and not trouble?” In all this, Job did not sin in what he said. When Job’s three friends, Eliphaz the Temanite, Bildad the Shuhite and Zophar the Naamathite, heard about all the troubles that had come upon him, they set out from their homes and met together by agreement to go and sympathize with him and comfort him. When they saw him from a distance, they could hardly recognize him; they began to weep aloud, and they tore their robes and sprinkled dust on their heads. Then they sat on the ground with him for seven days and seven nights. No one said a word to him, because they saw how great his suffering was. Then they started to have a conversation. One of the friends said, you must have done something wrong.

They insisted that he needs to turn away from whatever sin he was in. But Job kept saying that he was innocent. He asked God to answer him and say why he was suffering. Finally God answered. He said, “Where were you when I created the earth? Tell me, since you know so much! Who decided on its size? Certainly you’ll know that! Who came up with the blueprints and measurements? How was its foundation poured, and who set the cornerstone, While the morning stars sang in chorus and all the angels shouted praise? And who took charge of the ocean when it gushed forth like a baby from the womb?” Then Job replied, “I’m convinced: You can do anything and everything. Nothing and no one can upset your plans. You asked, ‘Who is this muddying the water, ignorantly confusing the issue, second-guessing my purposes?’ I admit it. I was the one. I babbled on about things far beyond me, made small talk about wonders way over my head. You told me, ‘Listen, and let me do the talking. Let me ask the questions. You give the answers.’ I admit I once lived by rumors of you; now I have it all firsthand—from my own eyes and ears! I’m sorry—forgive me. I’ll never do that again, I promise! I’ll never again live on crusts of hearsay, crumbs of rumor.”

He was finally comforted. In the second half of Job’s life, God gave him twice as much as he had lost.

So, look in your groups and discuss these three questions:

God was confident in Job. Everything was restored to Job. Job was honest. Job was willing to take both good and bad things from God. Have faith in times of trouble.

2. Why do you think Job was punished? What was God’s response?

Job was suffering to be a testimony to others. God is sovereign even in our suffering. God brought up Job in the first place. God had some divine purpose in this. God’s response was to ask who Job was to question him. He contrasted himself with Job.

3.  From where did Job find comfort?

Job found comfort from meeting with God. God does not even explain why all this is happening. In distress it is far more comforting to know God than to know why. In Philippians Paul talks about this contentment that comes from knowing the Lord. Faith comes from hearing the word of Christ.

This reminds me of the song written by Martin Luther during the reformation- the mighty fortress is my Lord. In German it literally meant this- that they can take away my body, my goods, my wife and my children, let them go away, they will have no profit, the kingdom must remain for us. The comfort and hope of the gospel is that we still have an everlasting Father. Even when we have nothing, we have everything. So lets pray and thank God for this blessing.

Word of Grace is an Evangelical (Born Again),  Spirit filled (Charismatic), Reformed, English speaking church in Pune that upholds the Bible as God's inspired Word for life. We are a church community that have people from every part of India and parts of the world. We are here to put the Great Command and the Great Commission into practice by equipping and releasing every member into works of service. To know more about us please log onto www.wordofgracechurch.org.
By Las V - November 02, 2017

Email ThisBlogThis!Share to TwitterShare to FacebookShare to Pinterest
Labels: All in the Family, Chris, Job