Who is Christmas about? | Colin D 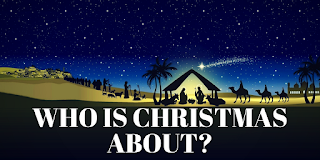 Luke 1: 26- 38 “In the sixth month the angel Gabriel was sent from God to a city of Galilee named Nazareth, to a virgin betrothed to a man whose name was Joseph, of the house of David. And the virgin's name was Mary. And he came to her and said, “Greetings, O favored one, the Lord is with you!” But she was greatly troubled at the saying, and tried to discern what sort of greeting this might be. And the angel said to her, “Do not be afraid, Mary, for you have found favor with God. And behold, you will conceive in your womb and bear a son, and you shall call his name Jesus. He will be great and will be called the Son of the Most High. And the Lord God will give to him the throne of his father David, and he will reign over the house of Jacob forever, and of his kingdom there will be no end.” And Mary said to the angel, “How will this be, since I am a virgin?” And the angel answered her, “The Holy Spirit will come upon you, and the power of the Most High will overshadow you; therefore the child to be born will be called holy—the Son of God. And behold, your relative Elizabeth in her old age has also conceived a son, and this is the sixth month with her who was called barren. For nothing will be impossible with God.” And Mary said, “Behold, I am the servant of the Lord; let it be to me according to your word.” And the angel departed from her.”

Q. Who is Christmas all about?

In verse 26 it says, 6th month of Elizabeth’s pregnancy. At the beginning of Luke, Zechariah was serving in the temple and as he was serving, an angel appeared to him. The nation of Israel had drifted away from God and steeped in legalism. It had declined completely and was being ruled by a non-jewish ruler, Herod and the Romans were controlling everything.

Not only was it politically weak, there was no voice of God. In the dark ages, the silence broke when the angel appeared to Zechariah. Zechariah and his wife Elizabeth were past child-bearing age. The angel says that his prayer has been heard and his wife is going to have a son and you will call him John. This John was going to be a special child- he will turn many of the children of Israel to the true living God. He is John the Baptist.

The angel Gabriel comes to Mary who was already engaged to Joseph. This is the second angelic visitation after 100s of years of silence. What did Mary find favour for? In Jesus’ lineage there were many who had questionable characters. They were sinners saved by the grace of God. But in this case, the angel says that she found favour before God.

The incarnation- the Holy Spirit will come upon you and you will have a child. This is what Christmas is all about. Since the time of Adam and Eve, sin came into the human race. God planned a way to redeem mankind. In Gen 3 God speaks about redemption by the seed of a woman. Through Abraham we were all going to be blessed. It is by one of the descendants of Abraham.

There was a Messiah who had been promised. For him, certain things were to be in place.

Q. What kind of a king was he?

And the Lord God will give to him the throne of his father David, and he will reign over the house of Jacob forever, and of his kingdom there will be no end.

Both Mary and Joseph are in the lineage of Abraham. Jesus came from the tribe of Judah to fulfill the prophetic words that have been spoken about.

2 Samuel 7:12- “When your days are fulfilled and you lie down with your fathers, I will raise up your offspring after you, who shall come from your body, and I will establish his kingdom.” This was about Jesus.

Today there is no proof of lineage anymore. Jesus was the long awaited king

One day Jesus will come back again and establish a new earth and new heaven where we will live without sin and in peace.

4.      He was the perfect son
In verse 39 it says, “The Holy Spirit will come upon you, and the power of the Most High will overshadow you; therefore the child to be born will be called holy—the Son of God”

Every other child born in this world is sinful. But Jesus was born without sin. He was Holy by birth. He was able to say, can any of you convict me of any sin? We are not able to say that.

God could have sent his Son in splendour and glory, but instead, he sent him to poor peasants.

5.      His purpose was to save people from their sins
Gal 4:4- “But when the fullness of time had come, God sent forth his Son, born of woman, born under the law, 5 to redeem those who were under the law, so that we might receive adoption as sons.”

God knew the right time, chose the right people and even instructed the government to have a census so Mary and Joseph went to Bethlehem. The reason Jesus came was to save us from our sins. He is fully man and fully God. He felt the same things we face.

As we celebrate Christmas together, let’s think about what Jesus did. These are a few things about Jesus, but how do we apply them in our lives?

1.      For nothing will be impossible with God. What is it that you find it impossible for God to do this Christmas season?

Nothing is impossible for God. We need to hold on to this verse. As we think about Jesus, let this thought ring in our minds

She submitted herself to the will of God completely. Can you imagine the plight of Mary- The shame of being considered an unwed mother? Are we open to embrace the will of God in our lives? We come across hard things everyday! But we need to submit ourselves to His will for everything that happens in our life.

The key is that Mary heard the word of God. Are we hearing the word of God for ourselves? Jesus broke into creation to save sinners and we have a role to play in that.

3.      Mary was an upright person. She was not sinless but she found favour in God. There is something we have to do, strive for practical holiness. If you really believe that we cannot do anything apart from Jesus, we would be saturating ourselves in the word and be on our knees for an hour everyday in prayer. Let us find favour with God.

Word of Grace is an Evangelical (Born Again),  Spirit filled (Charismatic), Reformed, English speaking church in Pune that upholds the Bible as God's inspired Word for life. We are a church community that have people from every part of India and parts of the world. We are here to put the Great Command and the Great Commission into practice by equipping and releasing every member into works of service. To know more about us please log onto www.wordofgracechurch.org.
By Las V - December 05, 2017