Born for such a time as this | Colin D 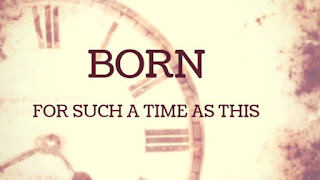 We are all aware that there is a battle going on in the heavenlies. Often we think this battle between God and Satan. But is it really?

God is all powerful and made the whole universe by his word. He is so much more powerful than Satan. 2 Thessalonians 2:8 “And then the lawless one will be revealed, whom the Lord Jesus will overthrow with the breath of his mouth and destroy by the splendor of his coming.” God and Satan are not in a battle. We can’t even kill an ant with our breathe, but God can do all things. For some reasons, he has not destroyed Satan yet.

Satan is a fallen angel. In scripture there are 3 angels mentioned- Michael, Gabriel and Lucifer. Lucifer is a fallen angel. God has given us the power to battle Satan. So the battle between good and evil is between God’s people and Satan.

We need to realise what our purpose and destiny is. Our destiny is to bring God’s presence here on earth. We do that with our deeds. God doesn’t need us but he has chosen to give us this responsibility.

“Now these things occurred as examples to keep us from setting our hearts on evil things as they did.” And in verse 11 it says “These things happened to them as examples and were written down as warnings for us, on whom the culmination of the ages has come.” The entire Old Testament History is written as warnings for us to understand. So we will look at the book of Esther today.

King Xerxes of Persia ruled over 137 provinces. He had a beautiful wife- Vashti. One day he had a party and wanted to show off his wife. But she refused. So his advisors in verse 19 said “Therefore, if it pleases the king, let him issue a royal decree and let it be written in the laws of Persia and Media, which cannot be repealed, that Vashti is never again to enter the presence of King Xerxes. Also let the king give her royal position to someone else who is better than she.”

In the ordinary things of what happened, but really there is a sovereign God behind everything that happens. God is making a way for another queen to come into the palace. In Chapter 2, they find all the young unmarried women and give them a beauty treatment. There is a Jew called Mordecai who sends his cousin Esther to go through all this in the palace. Esther goes into the palace. In verse 15- 16 “When the turn came for Esther (the young woman Mordecai had adopted, the daughter of his uncle Abihail) to go to the king, she asked for nothing other than what Hegai, the king’s eunuch who was in charge of the harem, suggested. And Esther won the favor of everyone who saw her. 16 She was taken to King Xerxes in the royal residence in the tenth month, the month of Tebeth, in the seventh year of his reign.”

There is amazing sovereignty of God in all these things, but we too need to play our role. In chapter 3, we see that the battle is real. The devil influences people too. There are forces of darkness that are controlling those people. Just as the anointing of the Holy Spirit that spurs us into action, Hitler was also under an anointing, but it is the anointing of the forces of darkness which led to the death of millions of Jews. In Esther 3 we see the man called Haman. He was an enemy of the people of God. In every nation there are enemies to the people of God. These people are influenced by the forces of darkness. Mordecai did not respect Haman the way he wanted to be respected. So Haman wanted to destroy all the Jews throughout the kingdom.

The devil is after us. We are in a battle. You are an enemy of Satan because you belong to Jesus. In verse 8 “Then Haman said to King Xerxes, “There is a certain people dispersed among the peoples in all the provinces of your kingdom who keep themselves separate. Their customs are different from those of all other people, and they do not obey the king’s laws; it is not in the king’s best interest to tolerate them”. This is the plotting of genocide. This has been throughout history and today there is so much antagonism against God’s people.

Esther 3: 10- 11 “So the king took his signet ring from his finger and gave it to Haman son of Hammedatha, the Agagite, the enemy of the Jews. 11 “Keep the money,” the king said to Haman, “and do with the people as you please.””

When mordecai heard about this, he reacted. In Esther 4: 1 “When Mordecai learned of all that had been done, he tore his clothes, put on sackcloth and ashes, and went out into the city, wailing loudly and bitterly.”Then he went to Esther to do something about it. In verse 12- 14 “When Esther’s words were reported to Mordecai, 13 he sent back this answer: “Do not think that because you are in the king’s house you alone of all the Jews will escape. 14 For if you remain silent at this time, relief and deliverance for the Jews will arise from another place, but you and your father’s family will perish. And who knows but that you have come to your royal position for such a time as this?”” He is saying, just because you are not directly affected right now, don’t think that it doesn’t matter to you. We are like Esther. We have a role and responsibility to respond.

Esther’s response: Verse 16 “Go, gather together all the Jews who are in Susa, and fast for me. Do not eat or drink for three days, night or day. I and my attendants will fast as you do. When this is done, I will go to the king, even though it is against the law. And if I perish, I perish.”” When the enemy attacks we have got to do something. God is allowing this to happen because he wants to reward us. One thing the church has neglected over the years is of fasting and praying. We are blessed with so much food and so many choices. Our character is tested not just in lack but in plenty.

Fasting is abstaining from food. We can do other kinds of fasting, but biblical fasting is to abstain from food. Let’s cultivate a lifestyle of praying and fasting.  As a result of this the king couldn’t sleep. Esther 6: 1” That night the king could not sleep; so he ordered the book of the chronicles, the record of his reign, to be brought in and read to him.” There he saw Mordecai’s name as someone who saves him. He asked Haman what he must do for someone he delighted in. Then Haman gives a list of all things he would have done to him. in verse 10 he says ““Go at once,” the king commanded Haman. “Get the robe and the horse and do just as you have suggested for Mordecai the Jew, who sits at the king’s gate. Do not neglect anything you have recommended.” The tables have turned. It was possible by the power of prayer and fasting. At the end of the story, Haman is hanged on the gallows that he made for the Jews. The people of God were saved and the purposes of God continued.