Mothers in the Bible | Colin D 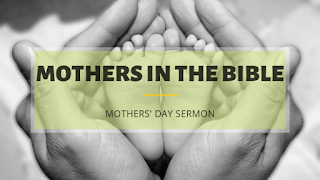 
Today is Sunday and also Mother’s Day. Apart from Mother’s Day, there are many other days like Friendship Day, Father’s day, Children’s Day, Teachers Day and lots of other days.

Children, obey your parents in everything, for this pleases the Lord.

As growing up children we need to accept their authority. Once we have grown up, we honor and respect our parents but we don’t come under their authority. The distinction is very important. When you are an adult you are responsible for your actions. An d honoring could mean that you may choose not to agree with your parents in certain situations. I remember a person who spoke to me and says that his parents told him to marry this girl, he didn’t want to marry her but because his father said marry her, he did. It didn’t work out and they got divorced. There are decisions that you take as an adult that you are responsible for.

Each of you must respect your mother and father, and you must observe my Sabbaths. I am the Lord your God.

Each of you must respect your mother and father, and you must observe my Sabbaths. I am the Lord your God

Respect is the way we speak to them and treat them. The way we treat them shows respect.

4)      Provide for them:
1 Tim 5:4
But if a widow has children or grandchildren, these should learn first of all to put their religion into practice by caring for their own family and so repaying their parents and grandparents, for this is pleasing to God.
If a father or mother is in need, it is our responsibility to make sure that we are caring for them.
1 Tim 5:8
Anyone who does not provide for their relatives, and especially for their own household, has denied the faith and is worse than an unbeliever.
We have to keep this in mind that if our Father or mother or relative is in need, we have a responsibility to care for them especially in their old age.


Word of Grace is an Evangelical (Born Again),  Spirit-filled (Charismatic), Reformed, English speaking church in Pune that upholds the Bible as God's inspired Word for life. We are a church community that has people from every part of India and parts of the world. We are here to put the Great Command and the Great Commission into practice by equipping and releasing every member into works of service.  Word of Grace is a part of a wider international family of Churches called RegionsBeyond.To know more about us please log onto www.wordofgracechurch.org.