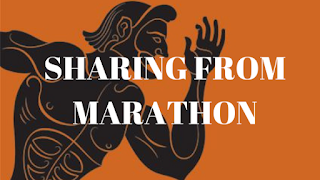 There's a history behind this name through which the running long distance is named as Marathon.

Years ago there was a war between Persia and Greece which was called The Battle of Marathon. When the Greek people won the war, one of the Greek soldiers ran to Athens to announce the victory of Greeks.
So, when we meet there, it was like heaven because there were people from different countries, speaking different languages.Today we're going to share some of the important things that were shared in the conference.
Some of the prophetic released were -

* New Era We are entering a new era. It’s not going to be old but totally new. Seasons are recognizably what we have experienced before. However, an Era is something new that we have not experienced. You have to leave somethings behind and adjust to what is to come.

* Build a legacy - shared by Navaz


We have been used to doing things in a certain way. God wants to break the mold and do something new. We have put God in a box and he is saying take the boxes off. We are going to do movement and Regions Beyond like something we have never done before.
Regions Beyond is not about a slick structure but it’s about being led by the Spirit. The Spirit will mark and make us distinct in who we are.

The eternal principles in the Word of God will always be our plumb line but the practice outworking – the practice of what each church looks like will be different for each one.

For each one of us we are called to build and leave a legacy. A legacy that will last forever form one generation to another. Each of us have a mandate and responsibility to do this. What version of Christianity will we leave behind? Will the next generation stand on our shoulders and take it even further, and this is the charge God is giving us.  We should be able to say I have fought the good faith of faith; I have


Steve Oliver's sharing:
Neh 1:1-4
When we see our city, do we see it with our eyes or through the eyes of God?
Nehemiah was in a very good position. He had good food, good clothes because he was very close to the King. He was the cupbearer of the King.
But he was concerned about Glory of God. He prayed, fasted and mourned for his city. Do we look at the city of Pune as God sees?

e.g. London is a very beautiful city
But initially it was not like that. There's was an area called Devil's Acre. It was notorious slum. A man by name Samuel Martin, along with 25 people decided to move into this place. They faithfully preached and worked for the poor, cared for the sick and prayed for them. The result was - within 20 years, things changed and the church grew to 1000 people. It's a transformed place and is famous now.

Steve gives us 3 insights -
Faith like Nehemiah and Samuel Martin. To transform people, cities and nations.
1. Look at our city through God's eyes
2. Nehemiah and Samuel Martin acted upon what God has put on their hearts.
Let's ask God to use us to transform our city. We must love and serve people of this city
3. Lean into God
The task we're given is very big. We need supernatural help. Hence its very important to lean into God


Sharing by Daniel _  A vision of Jesus that will sustain us Revelations 4&5
We must lead in confidence and purpose in ourselves.
We often lean on wrong people and wrong things. But we need to lean on God and that's when we see God's glory.

In chapter 4, John refers to the throne of God 19 times. HE cannot get over the throne. Every time the saints get a glimpse of heaven they see the throne. Isaiah and Ezekiel saw the throne and were changed. The one who sits on the throne is the one who is in charge.
We can feel overcast by governments, politics et cut we are told that there is a throne to which every throne will bow. Even Satan will bow to this throne one day.
In chapter 5, scroll with 7 seals.

John weeps that there is none to open the scroll.

This new era will be marked with weeping. When did we last week over our nation?
While John was weeping, one of the elders tells him to stop weeping.  Behold! The lion of the tribe of Judah, the root of David. Jesus is the lion – born in humanity under the power of the Holy Spirit. He walked on the earth like a lion – he owned everything, spoke with authority and lived without fear. Jesus the infinite lamb and lion were strength and meekness 2 diverse excellences combined in one being.

What do we do and how do we do to transform the city?
John lived a fulfilled life and was confident of the promises of God for the future.

On the scrolls is the purposes and the judgments of God for all the nations. God has a plan to bless us. The scroll sat upon the right hand of God and God is holding it out open toward heaven.

Who is worthy to open the scroll? The angels eye all of heaven and find no one can open and look into it. Imagine the descending realization- no creature, no angle could step forward.

Theological accuracy is not enough. We need doctrinally shaped minds and hearts that break over the nation.

When did we last break over our nation?
The way Jesus displayed his lioness is by becoming a lamb.
Ch 5 v9-11 the Lamb opens the scroll. Jesus could have exercised his lioness on earth .But he chooses to be the lamb t the slaughter.

Satan thought he could get the better of the lamb. Col 2;15
But the lamb was orchestrating everything. Death thinks it has won but the lamb gets up and ascending, sits on the throne – the lamb that once was slain.

This is what we should remember – in all that, we do. We lose everything if we do not have our hope in Jesus. We can go in confidence and tell people that their names race written in the lamb’s book of life that their debt has been paid for.

The 100 year prayer of the Moravians was amazing. They were lion sin confidence willing to die as lambs.
May the lamb receive the reward of his suffering” This used to be their prayer.
We are embarking on a new Era- we don’t know what before us but this can be our prayer in all we do.