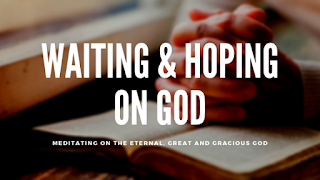 Isaiah 40:5-31
Think about your greatest accomplishment. Maybe you’ve excelled at school or at work. Thomas Edison invented the light bulb, a machine to show moving pictures, a transmitter, etc. If anyone had a right to boast, it was him. But he humbly said he couldn’t make the simplest form of life. Only God can do that.

As we focus on the greatness and goodness of God, it strengthens us to go through anything. In Jer 9:23, Jeremiah says our boasting should be in the fact that we know God. Charles Spurgeon said, “The highest science, the loftiest speculation, the mightiest philosophy, which can ever engage the attention of a child of God, is the name, the nature, the person, the work, the doings, and the existence of the great God whom he calls his Father.” A W Tozer said, “What comes to our mind when we think about God is the most important thing about us.” It is so important that we have the right view of God.
So how does this passage in Isaiah tell us about who God is?

1.      God is eternal- His word is eternal. He is without beginning and has no end. The hills which are full of trees wither completely due to change in seasons. Millions of men have come and gone, but God and His word have stayed forever.

People have tried all means to end the word of God. The Roman emperor wanted every copy of the Bible to be burnt, but 25 years later the next emperor, Constantine asked 50 copies of the Bible to be written out. Our God is on His throne. In 1778 Voltaire made a prediction that 100 years from then, the Bible will be a forgotten book and Christianity will cease to exist. But the Geneva Bible Society now uses his home to print and distribute Bibles all over the world. God’s word does not depend on you and I. He will watch over His word and His church.

2.      God is great: V. 12-15; 23-26
“Who has measured the waters in the hollow of his hand,
or with the breadth of his hand marked off the heavens?
Who has held the dust of the earth in a basket,
or weighed the mountains on the scales
and the hills in a balance?
13 Who can fathom the Spirit[d] of the Lord,
or instruct the Lord as his counselor?
14 Whom did the Lord consult to enlighten him,
and who taught him the right way?
Who was it that taught him knowledge,
or showed him the path of understanding?
15 Surely the nations are like a drop in a bucket;
they are regarded as dust on the scales;
he weighs the islands as though they were fine dust.”
“He brings princes to naught
and reduces the rulers of this world to nothing.
24 No sooner are they planted,
no sooner are they sown,
no sooner do they take root in the ground,
than he blows on them and they wither,
and a whirlwind sweeps them away like chaff.
25 “To whom will you compare me?
Or who is my equal?” says the Holy One.
26 Lift up your eyes and look to the heavens:
Who created all these?
He who brings out the starry host one by one
and calls forth each of them by name.
Because of his great power and mighty strength,
not one of them is missing.”

We look at the creation – He created everything out of nothing. On 20 Aug 1977, the Voyager 2 was sent to view the outer planetary system. On 28 Aug 1989 (more than a decade later), it only reached planet Neptune, and eventually left the solar system. But God made millions of galaxies like our galaxy! Our Universe is so vast and we are so tiny in comparison. When presidents and primemnisters are in office, they seem big, but He brings them to nothing. That power is nothing before the power of God.

Pharoah for instance- they build massive pyramids much before their time. But they messed with the wrong people and God did a miracle and Egypt is no longer the glorious city it was. Our hope in a God who has all power.

In Daniel 5, we see how Belshazzar did not honour God and used consecrated goblets for his party. The hand of God wrote a warning on the wall and that very night he was killed.

3.      God is gracious: v. 27-31 “Why do you complain, Jacob?
Why do you say, Israel,
“My way is hidden from the Lord;
my cause is disregarded by my God”?
28 Do you not know?
Have you not heard?
The Lord is the everlasting God,
the Creator of the ends of the earth.
He will not grow tired or weary,
and his understanding no one can fathom.
29 He gives strength to the weary
and increases the power of the weak.
30 Even youths grow tired and weary,
and young men stumble and fall;
31 but those who hope in the Lord
will renew their strength.
They will soar on wings like eagles;
they will run and not grow weary,
they will walk and not be faint.”

We need to be a people who wait and put our hope in the Lord.
a.      What is our hope in?
History is moving forward and will culminate when Jesus comes back. In history, the Glory of God was manifest at different times. But on the second coming, everyone will see His glory. Our hope is that Jesus will come. So let’s put our trust in His. 1 Thess 4: 16-17

Our God is on the throne! He is eternal, he is great and he is gracious! Let’s encourage one another with these words.