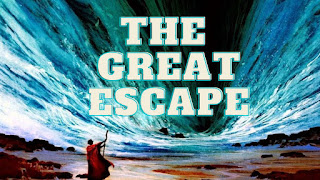 This message was preached by Andrew DCruz via zoom at Word Of Grace Church on November 29th 2020. for the audio please click here.

We will be looking at a very interesting part of the journey of the Israelites entering the Promised Land.

Significant event before the Exodus: The Passover.

Exodus 12 is a dark and grim time in Egypt.

“The Exodus” starts at verse 31 of chapter 12 where Moses and Aaron were summoned to Pharaoh’s palace where Pharaoh says “Up! Leave my people, you and the Israelites! Go worship the Lord as you have requested… And also bless me.”

The Israelites, upon leaving, took articles of gold and silver from the Egyptians because “The Lord had made the Egyptians favourably disposed toward the people, and they gave them what they asked for….  (v35-36)

Consecration of the Firstborn:

Similar to tithing. The first male of every offspring was to be set apart as it belongs to the Lord (13:2)

Redeem every firstborn among your sons: We were bought with a price. The Egyptians lost their firstborns and Israel’s first borns were redeemed by blood through the sacrifice of the firstborn of every animal for the firstborn for each son (13:15)

Parallel: Jesus, the sacrificial lamb, was sacrificed not just for the redemption of the firstborns, but for the second and third, born, the male and female.

God knew the mentality of the Israelites. He knew that they were not ready for war. The renewal of their mind was not complete. The trust that Jesus has your back, that he has called you for a purpose, that you were redeemed for a reason, was not fully clear to them yet.

“God did not lead the people on the road through the Philistine country even though it  shorter, For God said, “if they face war, they might change their minds and return to Egy.” (13:17)

“By day the Lord went ahead of them in a pillar of cloud to guide them on their way and by night in a pillar of fire to give them light, so they could travel by day or night.

Parallel - In the OT there was no Holy Spirit. After the ascension of Jesus to heaven, he gave us the HS which lives in us day, and night.

The Israelites saw with their own eyes a physical manifestation of God! The God they worshipped was not an “out of context, theory only” God. They saw the pillars of cloud and fire.

God’s great plan: Then the Lord said to Moses “Tell the Israelites to turn back and encamp near Pi Hahiroth, between Migdol and the sea. They are to encamp by the sea, directly opposite Baal Zephon. 3 Pharaoh will think, ‘The Israelites are wandering around the land in confusion, hemmed in by the desert.’ 4 And I will harden Pharaoh’s heart, and he will pursue them. But I will gain glory for myself through Pharaoh and all his army, and the Egyptians will know that I am the Lord.” So the Israelites did this. (14:2-4)

Egypt was a superpower during that time. They had the military equipment, the fast chariots and horses, steel weapons and were a mighty force. The Israelites up until this point were slaves. They did not know how to fight. They did not have any sophisticated weaponry.

As soon as the Israelites saw the Egyptians their first response to the crisis was to be terrified. The next response and probably the worse of the two, was to blame Moses, saying “Was it because there were no graves in Egypt that you brought us to the desert to die? What have you done to us by bringing us out of Egypt? 12 Didn’t we say to you in Egypt, ‘Leave us alone; let us serve the Egyptians’? It would have been better for us to serve the Egyptians than to die in the desert!” (14:11-12)

Moses had the vision and faith to trust in the Lord, and said: “The Lord will fight for you”.

There are multiple instances in the Bible where the Lord chooses to use dire situations for his glory, so we may exalt him and praise him. Those situations seem impossible for us to overcome, but by the grace of God, we would not be able to do it.

The Israelites needed to see victory, but a victory that was permanent. A victory which showed them that the Lord their God was with them. For the battles yet to come were far greater. The battle of the mind in the desert, the battle of taking hold of the promise of God and invading Cannan. The battle of Jerico.

15 Then the Lord said to Moses, “Why are you crying out to me? Tell the Israelites to move on. 16 Raise your staff and stretch out your hand over the sea to divide the water so that the Israelites can go through the sea on dry ground. (14:-15-16)

The Lord has a sense of humour. It was “obvious” to him that they would have to go through the red sea.

Explain my life situation: Press 7 instead of 0 like as if it's obvious.

The purpose of the red sea: