A Life of Faith - Lessons from the life of Noah 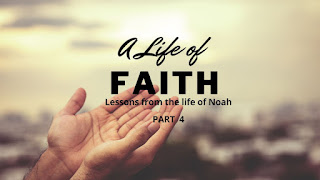 A Life of Faith - Noah