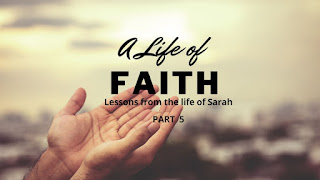 THE WAIT OF FAITH

Have any of you had the experience of saying something to your child/spouse/ pet that you needed to hear for yourself? Recently our cat has been very vocal - wakes me up before my alarm goes off, wants food, then wants to go out, wants to be pet, wants to play… so every morning I’m telling her - “Mia, you’ll get it but you just have to wait”. And so many times when we are agitating with God about something, this is what he would say to us…

We have been in a series on Hebrews 11 - the wall of faith and we’ve passed by the portraits of Abel as we learnt about the Worship of Faith, Enoch as we learned about the Walk of Faith and Noah as we learnt about the Work of Faith. But as I was pondering about the lives of the people we are going to talk about today- Abraham and Sarah – I wondered what would be the overarching theme and this is it - it is not a popular word but it is - WAIT. In fact, Hebrews 11: 13 says “All these people were still living by faith when they died. They did not receive the things promised; they only saw them and welcomed them from a distance, admitting that they were foreigners and strangers on earth.” If anything characterizes the faith of Abraham Sarah, it is how they handled the WAIT of God. It is a faith that dares to leave a legacy. I’ve entitled this message - the Wait of Faith.

Hebrews 11:11 “By faith Sarah herself received power to conceive, even when she was past the age, since she considered him faithful who had promised.

Gen 11 - 23 Story of Sarah: (Sarah’s narrative)- The introduction of Sarah was - now Sarah was barren; she had no child (Gen 11: 30). Abram hears the call of God to move from Haran where they were settled to a foreign land that he doesn't know until he gets there. The bible only tells us that he took Sarah and Lot. Now Genesis doesn’t tell us about Sarah’s character, but Peter does in 1 Peter 3:5-6 “For this is how the holy women who hoped in God used to adorn themselves, by submitting to their own husbands, as Sarah obeyed Abraham, calling him Lord. And you are her children if you do good and do not fear anything that is frightening.”

While they were travelling, there were 2 instances (Gen 12 and Gen 20) when Abraham asks her to pretend to be his sister in front of a king so that he will not be murdered because of her beauty. Both times God comes to her rescue and the kings are begging Abraham to take Sarah back. I wonder if Sarah has a close relationship with the one who rescued her when her earthly protector failed her.

Then one day after dinner, Abraham goes out for a stroll and God speaks to him again while he is looking at the stars and the sand - he says your offspring will be like the stars in the sky and the grains of sand in the desert. He must have come home and shared it with Sarah because she has had enough of this waiting. She says, “Here is my servant, please fulfil your promise through her”. How many of us have said to God “you’ve chosen the wrong person” or “It’s just not going to happen with someone like me”? And Abraham says, sure, why not and has Ishmael with Hagar. But that was not the fulfilment of God’s promise.

When Abraham is 99 and Sarah is 89 years old, he comes home after receiving this name change from God. he says I'm no longer just Abram (Honored father), but Abraham (father of a multitude of nations) , and guess what, God gave me a new name for you too. You are no longer Sarai (My princess/ My woman of strength) but Sarah (princess/woman of strength). “15 Then God said to Abraham, “As for your wife Sarai, you shall not call her by the name Sarai, but Sarah shall be her name. 16 I will bless her, and indeed I will give you a son by her. Then I will bless her, and she shall be a mother of nations; kings of peoples will come from her.” Sarah gets a bad reputation for laughing at the promise of God, but did you know that when Abraham received this promise, his first response was to laugh as well? 17 Then Abraham fell on his face and laughed, and said in his heart, “Will a child be born to a man a hundred years old? And will Sarah, who is ninety years old, give birth to a child?”

Then one day Abraham shows hospitality to 3 men. One of them is referred to as the LORD. He says to Abraham that in a year Sarah will conceive. And Sarah of course laughs and he confronts her. She says, I did not laugh and he says oh but you did! And in the amount of time that God spoke to Abraham about, Sarah Conceives and gives birth to Isaac which means, he laughs.

Though there was a long waiting period for both Abraham and Sarah, we see three types of distinct responses in Sarah’s life regarding the promise of bearing a child - the flesh response, the soul response and the spiritual response.

Q. How do we respond to the promises of God in our own life?

Do you have promises that God has spoken over your life? If not, there are tonnes of promises in the Bible…

Promises of God in the Bible:

So today, trusting in God’s faithfulness, by faith let’s receive power for the promises of God to be fulfilled in our life. Some of you are carrying promises from a previous generation. Today he is here to reignite some forgotten promises, promises that we’ve just put down because it got heavy to carry them. He opens barren wombs and brings to life dry bones. He is not just the God of the improbable, but the impossible. He is raising up men of women of God who will believe him for things we’ve not yet seen - pioneer miracles.