A Journey of faith- Part 2 ( The challenge and the Call) 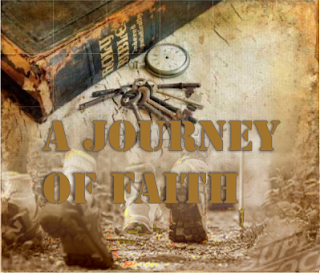 A Brief History of Word of Grace Church

This June we celebrated 10 years of God's faithfulness to us at Word of Grace. We are in awe at what the Lord has done and how HE has sustained us thus far.
Here is the second  part of the script of what was shared at our celebratory evening. ( I have added a little more detail here to make it more understandable). As you read it, my prayer is that you will have faith for your situation, to know that in this journey of faith, you NEVER walk alone. If you are a pastor, or involved in a church plant, I hope this  post will be a special blessing to you because this is a story of a BIG FAITHFUL GOD who never lets us down. To connect with PART 1 of the story, click here

In late 2001, early 2002, God began to stir our hearts towards church planting  - which is a part of the DNA of Newfrontiers. There was a small group of people  gathering in Pune that was led by a person called Martin Malkaney (also from LWC) who served this group of people by  making weekly visits from Mumbai  to Pune for a whole year. He then left for New Zealand. There was still a need for someone to pastor this fledgling church plant and another person Shashi Rajan took charge till a suitable person could be found.

We had received amazing prophetic words from John Paul Jackson and from Ram Babu about church planting in India and reaching the nations, starting a training school to train pastors … and  it left us thinking, “when will it happen?”.

Here are portions of those prophetic words we had received.
From John Paul Jackson ( January 1998)

Turns toward Navaz who not playing any instrument that day-  And I see music, music comming out of your mouth young lady. Musical notes are going to start coming out of your mouth. Prophetic utterances . You have got the gift of the prophetic utterance that God has given you and you are going to start speaking prophecies to people that is going to change a whole lot of things.”


During that time there were a few of us that made bi-weekly trips to Pune to support the group gathering there. I was one of them. And during these trips God began to draw my heart to Pune. We began to seek God whether it was his will for us to move.

Navaz had made a prayer to the effect “Lord if you want us to move, say something to us through a prophetic word or “you have stayed long enough on this mountain and it is time to move””. God was faithful, and at a conference in Jan 2002, God spoke these exact words through a new song that was introduced at our annual Newfrontiers India conference.

What is significant about this is that Navaz who has always been involved in the worship team at such conferences was not involved this time, due to the birth of our second child, Jessica. Therefore she was unaware of the songs being practiced or the new songs’ being introduced.
These were the word of the first verse of the song that sealed it for Navaz.

There’s a call to the people of Zion
To arise and possess the land
Every town has it’s heirs to the promise
Every nation it’s sons of Light
We have stayed long enough on this mountain
Now we’re called to new realms of faith;
We are more than a temple of worship
We’re an army of praise!

So in June 2002, our family moved to Pune. To help you visualize this  here is a photo of Andrew,7 years old and Jessica  who had just turned 6 months.

We want to express our thanks Living Word Church  & David Fernandes for sending us out  ( The Church had already sent out Sydney to Nashik, Franco to SantaCruz, Arun to Bangalore and now us to Pune)
Many leaders want to hold people back , but David said if God is calling you – you must Go -  and  they blessed us and supported us. I want to take this opportunity tos recognize David and Living Word Church for their spirit of generosity for not only sending us out but many many others. David who is a dear friend and a spiritual father to us will be bringing the word today. ( click here to hear the message preached by David Fernandes)

We are thankful to some of the ones who were in the Pune church in 2012 who made our transition to a new city so easy and who welcomed us warmly. I want to make special mention of Glynis,(who is here today)  Shashi & Neelam and David Ludwig among others.

Here are a few pics of the first 6 months 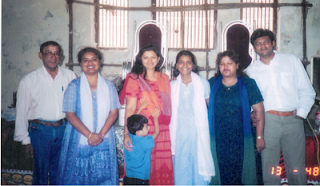 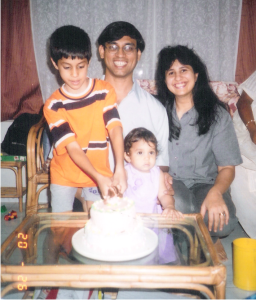 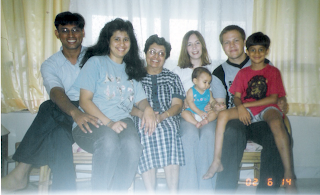 Our first visitors :
Pete and Liz Harwood
And
Nini - Navaz's mum ( who helped us settle in) 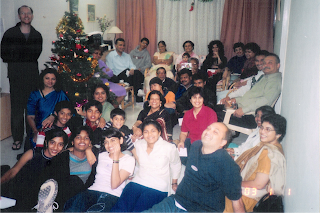 First Prophetic Words over the Church.

Ephesians 2:20  speaks about the church being built on apostolic and prophetic foundations. Besides the prophetic words we received personally.  In 2003 we received a prophecy for Word of Grace.

Sam Poe  ( July 2003 at Brighton, UK)  – "I Felt the Lord was going to open doors unexpectedly into areas and opportunities of harvest and that you are going out of pioneering to see the church planted. God is going to give the church an apostolic base, not just a local church,  but having influence over an area. I see people coming in and going to plant other churches, you will raise people and send them out." 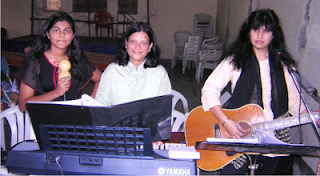 A few months after moving into Pune, we sought to name the church.  As I prayed about I felt God lead me to a text in Acts 20:32 : "Now I commit you to God and to the word of his grace, which can build you up and give you an inheritance among all those who are sanctified.”

John Hosier, who at one time was the senior pastor of Church of Christ the King in Brighton visited us in Pune . We had the joy of him preach at our church, pray for us and be with us as we named the church.


Very soon into our first year, Newfrontiers India  went through a huge turmoil and change in the Apostolic leadership. The ripple affects were felt by all the churches, us included.

One of the things  John Hosier said to us on his visit  was, “One of Satan’s ploys to attack church plants is to create irreconcilable relational differences and to prevent the church from being rooted and established”, and that we need to watch out for this.
Sadly in the early years we faced this  a lot and we were buffeted by wave after wave. But God strengthened us and gave us the grace to have faith and to persevere and to just hold on. The battle for the first fruits had begun.


In the next part we will share some of our struggles as a Church plant.

The struggle, the Dark Ages ( to be continued)