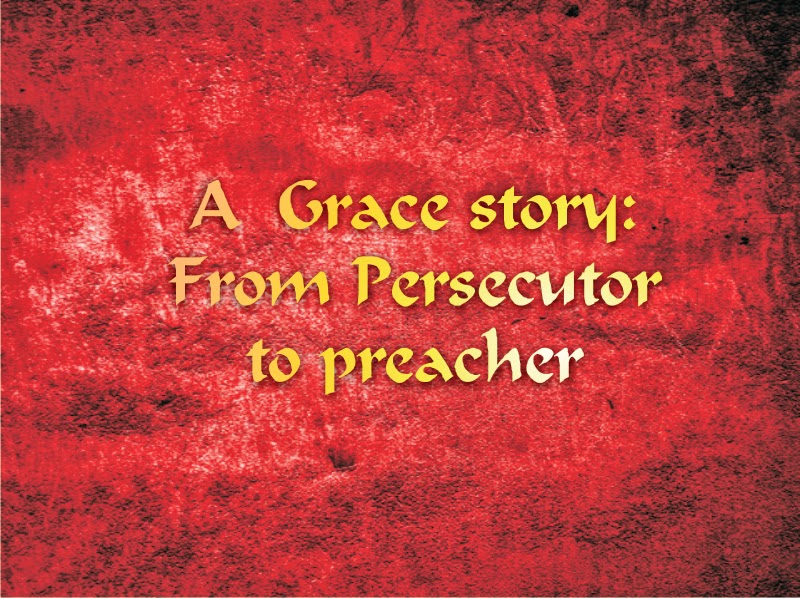 This message was preached by  Colin D cruz at Word of Grace Church  Pune, on the 22nd of June 2014 . You can listen/download to the audio by clicking here

There are 2 religions in the world. First one says, do and the second one says, done! Which one do you follow?

Why did God save you? Why you and not someone else?Is it because you are better, smarter, etc? When these thoughts come, shoot it down.
We are here because He had mercy and unconditional love. But when we look at God’s word, we see that He chooses all kinds of people to demonstrate His grace.

Q. What does the grace of God really mean?
This story is of a man who was part of a murderous gang who actually murdered someone. Last week, we saw Stephen’s life and how these people killed him.
We begin today, the story from Acts 7:58 “Meanwhile, the witnesses laid their clothes at the feet of a young man named Saul.” This frenzied mob killed Stephen who forgave them for what they did.This is the power of the Christian gospel. We can pray- do not hold anything against these people.

The early Christians were martyred by being fed to the lions, burnt at the stakes, and all kinds of gruesome acts of torture and murder. But the Roman Emperor realized that nothing was changing them.

Acts 8:1- the church was scattered. Only the Apostles were left in Jerusalem. We see the hand of God even in the persecution. They went out to Judea, Samaria and to the ends of the earth.

Acts 9:1- Saul was breathing murderous threats and was arresting the Christians. He was against the Christians. He seemed like a hopeless case. There are a lot of people like that. But God is in control. Saul was on the way to Damascus when he encountered Jesus in a bright light saying, “Why are you persecuting me?” When you touch the body of Christ, you touch the creator. That’s our security and assurance- that we belong to Christ’s body.

Acts 9:7- Saul was struck by blindness- an amazing super natural intervention by God. And for 3 days he was on a forced fast. And then he went to Damascus where an ordinary disciple named Ananias heard from God to go to Straight Street and to place his hands on Saul, pray for him and restore his sight. His response was that he is an anti-Christian person- are you serious? But He obeyed God and went and placed
God said that this man is my chosen instrument- for taking His word to the gentiles, their kings and before the people of Israel-  Acts 9:15- 16.

The moment Ananias prayed over him, and something like scales fell off his eyes. At this point, Saul did not eat or drink anything for 3 days. What would you do in that situation? But Saul got up and was first baptized. Then he ate and regained his strength.
And what did he do next? Acts 9: 20- “At once he began to preach in the synagogues that Jesus is the Son of God”. People who heard him were astonished that someone who persecuted Christians is now preaching the gospel that Jesus is the Christ.
No matter how big is our sin, no matter how much we’ve done, Jesus’ blood is more powerful. He can forgive us and make us new people. That’s the power of His blood. The response of John Newton to God’s grace- the song Amazing grace how sweet the sound that saved a wretch like me. Even when we sin grievously, God is able to save and change.
God is much bigger than your sin and has the power to cleanse every sin. Either we pay for our sins in hell forever, or we accept Jesus’ sacrifice as payment for our sin.

Jesus’ followers follow the second one. This says, you can’t do anything and all your works are filthy, dirty rags, it is contaminated with sin and a Holy God can’t accept it. But Jesus is God who loved us so much that he came to the earth and lived a sinless life and died on the cross and rose again from the dead! It is finished on the cross and what he wants us to do is to look at him and believe. When we do this, an encounter with God happens that brings about transformation.

Saul became from a persecutor to preacher of the Christian faith. God’s grace is Big! So what did Saul do after being saved?

1.   The first thing mentioned about Saul after being saved is that he was praying. Once we believe in Jesus, we are no longer in a religion but a relationship and relationships thrive on communication. Prayer is our communication.
2.   The second this is that he was filled with the Holy Spirit. We need more of the Spirit in our lives.
3.   He was baptized! Baptism in water is a sign that you are truly saved where you declare to the powers and principalities, to your family, and everyone else that you follow Jesus.
4.   He wasn’t a lone ranger- He spent several days with the disciples in Damascus. He attached himself to a family of believers. It’s so important that we belong to a local expression of the body of Christ. He joined the other believers with humility.
5.   The next thing was that he started preaching. He did not take his salvation for granted. His focus was on advancing the kingdom. In 1 Timothy 1:15 Paul writing to Timothy says this- “Here is a trustworthy saying that deserves full acceptance: Christ Jesus came into the world to save sinners- of whom I am the worst.” Paul acknowledged that he is a sinner. He was one of the main apostles. But Paul’s life was an example for us.


God has saved us for a purpose. All around us, people don’t know right from wrong and follow all kinds of teaching. We are not superior to anyone else. We’ve been chosen because God had mercy on us. So the gospel needs to be preached. Once we die or they do, it’s too late. As we look at this portrait of grace in Paul’s life. It’s His grace working in us. We are not comparing or competing with one another. His grace is demonstrated in our lives. There is a needy world out there, so it is my prayer that each one of us becomes a pro claimer of the Gospel.