Trusting till the end : Principles, not precedents | Justin 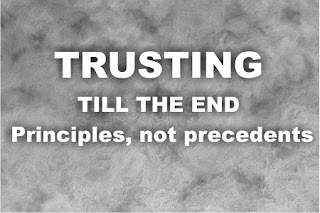 This message was preached by Justin at Word of Grace Church on the September 6th, 2015. To listen/download the audio please click here

Paul writes in 1 Corinthians 10:12- “So, if you think you are standing firm, be careful that you don’t fall!” The Old Testament is there as an example for us. Chronicles devotes 3 chapters to king Asa.

We are called to trust God at all times. Life is a journey- many start well and half way end up badly. This is the story of many kings. Asa faced the fate. Asa ruled Judah and listed among the 5 good kings. But something went wrong. His name means “healer”. The opening statement was that Asa did right in the eyes of the Lord.
In verse 16: 8, which is the signing off statement it says, in this you have done foolishly. We are called to trust God and run the race well. God is displeased when we fail to trust him. How can a good king like Asa fail?

God sends a prophet to confront him, but Asa was deceitful. The psalms say, trust the Lord at all times. Asa was a good spiritual leader. In verse 6 it says that he built cities, he was politically powerful. In verse 7-8, he strengthened and equipped the army. In Chapter 15 we see that people rallied around him. He was a people’s person. 2 Chronicles 16:2 says, he brought all the wealth he had to the Lord. He was rich and generous.

What did he do when he met the Cushite king? In his earlier life- how did he face the Ethiopian army?

Q. How were we when we just began trusting God?
We were filled with fervour and zealous for God.

1. Trusting God is not a concept and not doing nothing. It is doing things God’s way. Trusting God is taking God at his word and facing the challenge. They take battle positions but God fights on their behalf.
In 14:11- Asa cried out to God and seeks his help. Asa knew God not just as one of history but of his time as well. As we continue to trust God in life’s journey. Realize that the battle belongs to the Lord.

God is looking for people whose heart is fully committed to him. David did not become king overnight. 1 Samuel is all about David running from Saul. David always sought God. In 1 Samuel 27 David had been trusting God all his life. He is thinking that Saul will get him. He joins the Philistine army- he stops listening to God for a moment.
Faith life is challenging. David thought he was safe with the Philistines. Asa also took the help of the enemy unknowingly. But in all this God is good.

When power comes to our life in work or church, we need to continue to trust God and not our own strength.

2. 2 Chronicles 16: 2-3: The Precedent: we have always done this, so let’s continue to do this. Solomon had a treaty with the Syrian kingdom. Asa turns to the Syrian king we need to be careful of this. Asa takes the easy way out. That’s a big trap. Certain things of the past can be a trap for us. When Asa returns from the battlefield, the prophet warns him.

It is interesting to note that Asa was successful! Not all that is successful is correct. 2 Chronicles 16:4-6- it seems successful! Don’t be deceived. Asa attacks Israel and is successful. The world will tell you that these things are possible and successful but it is not right. But God is faithful- he sends a prophet to warn him.

In our life too, we seek God and not worldly counsel. The life of Saul did not wait for Samuel to offer sacrifice. Saul failed to follow instructions several times. Obedience is better than sacrifice.

Past experience and success is not a stamp of God’s approval. Asa missed the opportunity of being blessed by God. Because of Asa’s mistake, Ben-Hadad attacked Israel. Asa fell sick but did not consult God. He died unrepentant.

We need to trust him till the end. God’s work needs to be done in God’s ways. Over the years, we can become successful but we need to be careful. What worked years ago may not work today. Not precedent but principles.

Word of Grace is an Evangelical (Born Again),  Spirit filled (Charismatic), Reformed, English speaking church in Pune that upholds the Bible as God's inspired Word for life. We are a church community that have people from every part of India and parts of the world. We are here to put the Great Command and the Great Commission into practice by equipping and releasing every member into works of service. To know more about us please log onto www.wordofgracechurch.org.
By Navaz Dcruz - September 08, 2015