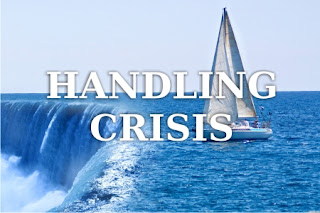 This message was preached  Justin at Word of Grace Church on the October 18th, 2015.  To listen/download the audio please click here  . To listen to the Sunday's worship and prophetic contributions please click here

Haven’t we all faced crises in our lives? When everything is ok it’s easy to praise God. Jehoshaphat was bringing good reforms (ch17) then suddenly in chapter 20 a new crisis came.
V2 Jehoshaphat hears that a vast army is comming . Imagine what he must have gone through. He was alarmed. He feared but he set himself to seek god.
Chapter 19 Jehoshaphat made an alliance with Ahab. A prophet told him that was not good.
What do we do when we face crises? Sometimes we panic, think about whom we can contact.

Jehoshaphat did this. He set himself to seek God and proclaimed a fast. AS a King he could have called his army chief and advisers. He wanted God not to give direction (God do this, God do that) but to get direction.

In Daniel, The king asks Daniel not just for the interpretation of the dream but to also tell him what the dream was about. Daniel 2:8 God revealed the dream and the interpretation.
Crises times are difficult aren’t they? The whole of Judah rallied around Jehoshaphat because he served them and sought their welfare.

What did Jehoshaphat do?
1. Praised God v5. Do we know who our God is? How dies praising god help a situation? Remember Paul and Silas were praising God, Peter slept while the church prayed and God did a miracle.

2. He recalls God’s promises. V7 He recalls God’s goodness. He was going back 1000 years recalling Abraham, 400 years back recalling Joshua and 100 years back recalling King Solomon. He reminded God about Abraham and also when the people dedicated the temple. He was falling on the promises of God. Often in the praise and worship we recount the names of God and the miracles he has done. Why do we do this? To build faith. Let’s recollect who our God is. He is the God of Abraham, Issac and Jacob and He is our God too.

3. Jehoshaphat presents the problem and allows God to judge.v1Those people were the offspring of Esau but he did not touch them. Now they are attacking Israel.
We often meet in groups and share our prayer needs. This place is a witness to many prayers being answered.

4.V12. Jehoshaphat ‘s eyes were upon God. He acknowledged his weakness. The fact that we come together and pray shows, that we can’t do anything on our own but look to God in prayer.
Recollect the past, rest on His promises, share prayer requests and humble ourselves.

The Result v13-14.  When we seek Him first God send a solution to us

V17-18 God gives clear direction and what to do. God does not deal like a magician. He told them what to do.

V20 Many times crisis can make us ineffective. But Jehoshaphat put his faith in God- he was exemplary. Take Gideon who was hiding is called Might Warrior. God strengthens him and he leads people from the front and what a victory!

V21 Jehoshaphat consulted the people. He was with the people. The people began to praise God. Panic turns to praise.

Several times in the Old Testament we see how God did extraordinary things.


So let’s take time to seek God and recall what he has done, claim these promises. We will begin to see change in our lives. We will set an example to others and we will lead from the front.

Word of Grace is an Evangelical (Born Again),  Spirit filled (Charismatic), Reformed, English speaking church in Pune that upholds the Bible as God's inspired Word for life. We are a church community that have people from every part of India and parts of the world. We are here to put the Great Command and the Great Commission into practice by equipping and releasing every member into works of service. To know more about us please log onto www.wordofgracechurch.org.
By Navaz Dcruz - October 21, 2015