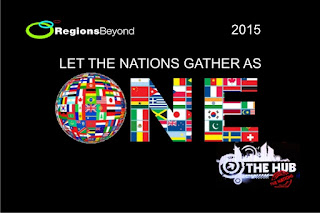 This message was shared by Terry Virgo on November 14th, 2015 at the Regions Beyond annual gathering of the nations- 'the HUB 2015' in Dubai. It was one of the Seminar Tracks. Audio link to follow shortly

2 Timothy 1
Paul had selected Timothy. He did not volunteer himself. Then Paul commissioned him as an apostolic delegate going on Paul’s behalf to places where Paul could not go.

It was the beginnings of an apostolic team. Now he is representing Paul. It’s a challenge no one will leap to. He had a big challenge, to represent Paul. It was a tall call.

He was called to several specific tasks- some demanding stuff- to instruct men not to teach strange doctrine, people with a wrong attitude to the law. This was huge in that day and time. Don’t judge the edges, speak with clarity.

I Tim 1:8- he had to handle male-female relationships and care for widows- authentic and non-authentic widows, he had to confront the rich and he has to do the work of an evangelist. So it’s a challenging call.

The limitations felt by Timothy:

·       He was obviously young. Commentators say that he was 40 years of age. Paul says don’t let people despise your youth- not it age but in the lack of experience, etc. Timothy felt vulnerable.

·       He was evidently timid. He was not confident. Some people think that a leader is a leader wherever he is. Not so. Biblical leaders are like Gideon, Moses post wilderness- lacking in confidence. Jeremiah was young. God has his way of calling people which may not be impressive. 1 Corinthians 16:10- “When Timothy comes, see to it that he has nothing to fear while he is with you, for he is carrying on the work of the Lord, just as I am.” He was genuinely concerned for the Philippians and not pre-occupied with his own personal interests.

·       1 Tim 5:23- Timothy was frequently ill and was adviced some wine for his stomach. Some people are weak physically.

These were some of his limitations.

Q. So what was Paul saying to Timothy?

This was Paul’s answer to Timothy’s problem- Fan into flame the gift of God that was given you through the laying on of my hand.

Let’s read it phrase by phrase:
1.       It’s a gift
It is an activity of the Holy Spirit. It is not about personality, education, etc. It is other than us who has given to us. We think that some have just got it. No! It’s other than us, but we have to stir it up and kindle it in us.

Like Samson- they asked where do you get your strength from? It was a mystery. He did not have muscles as in the paintings they paint. If so, people would not have to ask. So it is other than us. It is not obvious to people because it’s the Holy Spirit. We tend to think that the Holy Spirit is a reward for good conduct. We often pray “sanctify us so we may have more power.” Power does not come from our holiness. He wants us to be holy but God gives power. Anyway Samson was far from holy, but God’s power comes on him. David cultivated a presence of God. It’s a mystery.

2.       It’s a grace gift of God but sometimes we don’t believe it.
We think we have to be good to get it. We should be holy. He is holy but that’s not how we get it. We say it’s a gift but think it’s a reward. We pray ‘we are not worthy’. Yes you are not- but receive the gift. Peter was hardly worthy. He denies Jesus three times. And a few days later he is filled with power. It is a gift of grace. The Gift of God is not because of who you are. It’s other than you- you will never deserve it.

God said he will pour out his spirit on all flesh. God wants the power of the Spirit to flow in and through us. Samson was not the kind of person. Neither was Timothy. It was evident that God was doing it.

We tend to belittle things. Tongues- we belittle it, but Paul says he did it a lot. We need to take advantage of this gift. You spirit is praying mysteries to God. Speak in tongues daily. It introduces us to another dimension. We need to value all God’s gifts and don’t play them down. Allow God to use them. You have a gift- don’t back out, don’t deny it.

3.       It’s a gift of God within you:
Though it’s there we can neglect it. Here our response comes in. we need to fan it into flame. It’s in you. Don’t be timid. Like the woman at the well, she was confused about what Jesus was saying. He was talking about the living water. But she thought it was water. Jesus was offering her the well “in you a well”. She understood that he was offering her something that goes with her.

We often think that the well is church. Jesus says we have the well inside us. It is with us. In you. This is not to despise the gathering of the saints.

In the Old Testament, the presence was in the temple. It is an Old Testament concept. We think God is in the big meeting. But when we come to drink we get the well as well.

Luke 4- the spirit of the Lord is upon me… he has anointed me. We use the word anointed fairly carelessly. Jesus did not say I feel anointed. Something happened to him. 6 weeks ago in the Jordan when he got baptized.

We think if only I can get into an anointed meeting, sing an anointed song- no! We have been anointed. Paul says it’s in you.

4.       Fan into flame:
So we don’t neglect the gift of God that is in you. We have to counter attach the thinks that long to put the flame out. David was fighting at Ziglak. They come back to find everything stolen. His men wanted to kill him. David finds his strength in God. Then he speaks to the priest who says go. They go and get everything back.

It is not the guidance but finding himself in God. He fanned it into flame. We need to give it time. Being filled in the Spirit is a continuous thing. We need to engage afresh the gift of God that has been given to us. We have to fan it into flame. It is our responsibility to engage with the presence of the Holy Spirit. Enjoy the wonder of Jesus. Make melody with all your heart and suddenly the joy of the Lord is your strength. Keep yourself in the love of God praying in the Spirit at all times. David did this- he spoke to his soul not to be downcast. We need to speak to ourselves not hear ourselves.

“My chief duty is to make sure that my soul is happy in God.” G. Mully. It is the secret of longevity in the ministry. The days are evil. So be filled with the spirit. It’s like in an aeroplane- we are told to put the oxygen mask on ourselves first and then help others. We need to make sure our soul is happy in God. This will help sustain us and we can serve others in the long haul.

We must take time out with the Holy Spirit. Fan into flame, stir up the gift of God.

Q. What is ash?
It’s what was burning yesterday. You can’t live on ash. Sentimentality can get us down and can block our progress. Don’t look back.

We can close down because of a disappointing experience. We need to be careful. Don’t neglect the gift. You’ve been anointed. You come to God for those gifts to flow afresh in you.

Don’t neglect the Gift of God. The gift grows as we keep doing it. Sometimes we’ll make mistakes and we may get it wrong, but keep doing it.

Don’t wait to perfect it before you use the gift. Take what God gives you to the edge so as to fan it into flame.


Word of Grace is an Evangelical (Born Again),  Spirit filled (Charismatic), Reformed, English speaking church in Pune that upholds the Bible as God's inspired Word for life. We are a church community that have people from every part of India and parts of the world. We are here to put the Great Command and the Great Commission into practice by equipping and releasing every member into works of service. To know more about us please log onto www.wordofgracechurch.org.
By Las V - November 25, 2015