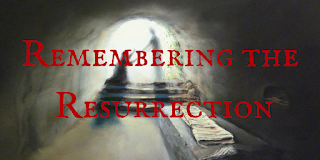 What the resurrection shows is that not only did Jesus rise from the dead, but that we too will rise one day.

In a Calvin and Hobbes comic, the teacher asks, does anyone have any questions? Calvin says, what is the purpose of human existence? It is a very good question. If you want to know the truth, you need to go to Jesus, because he is the truth. We find the purpose of human existence in Jesus. The truth is that death is only a doorway to life eternal. On the other side, there are two options- life eternal in the presence of God or separation from God forever and ever.

Q. What is Easter all about?

We are familiar with the resurrection account. Matthew 27:57- 60 “When it was evening, there came a rich man from Arimathea, named Joseph, who also was a disciple of Jesus. He went to Pilate and asked for the body of Jesus. Then Pilate ordered it to be given to him. And Joseph took the body and wrapped it in a clean linen shroud and laid it in his own new tomb, which he had cut in the rock. And he rolled a great stone to the entrance of the tomb and went away.” Jesus was really dead. In John 19: 31-34 “the Jews asked Pilate that their legs might be broken and that they might be taken away. So the soldiers came and broke the legs of the first, and of the other who had been crucified with him. But when they came to Jesus and saw that he was already dead, they did not break his legs. But one of the soldiers pierced his side with a spear, and at once there came out blood and water.” After crucifixion, the people can live on the cross for a few days. They broke the legs because then not being able to breathe, they would die. But when they came to Jesus, they found that he was already dead. Jesus chose the moment of his death. The soldiers poked a spear in his side and a sudden flow of water and blood came from his side. This is important because some people believe that Jesus was not truly dead.

The disciples did not believe Jesus could rise. But the Pharisees did. They took precautions to make sure he doesn’t rise. They rolled a rock weighing 1 and half tonne. Then they put a roman seal and then soldiers to guard the tomb.

Matthew 28: 1-7 “Now after the Sabbath, toward the dawn of the first day of the week, Mary Magdalene and the other Mary went to see the tomb. And behold, there was a great earthquake, for an angel of the Lord descended from heaven and came and rolled back the stone and sat on it. His appearance was like lightning, and his clothing white as snow. And for fear of him the guards trembled and became like dead men. But the angel said to the women, “Do not be afraid, for I know that you seek Jesus who was crucified. He is not here, for he has risen, as he said. Come, see the place where he[a] lay. Then go quickly and tell his disciples that he has risen from the dead, and behold, he is going before you to Galilee; there you will see him. See, I have told you.” Jesus rose from the dead. After he rose, this is what happened.

Jesus then appeared to them. In verse 9- 10 Jesus said ““Greetings!” And they came up and took hold of his feet and worshiped him. Then Jesus said to them, “Do not be afraid; go and tell my brothers to go to Galilee, and there they will see me.”” He appeared to the disciples and then many others. But the Pharisees paid off the soldiers to lie for some money. They tried to cover it up but

Q. what does it effect my life today that Jesus rose from the dead?

We should not be afraid of death. Death is only a doorway and if you are a believer you will be in the presence of God forever. You will be rejoicing on that day. Only one generation will not die- the generation that will be here when Jesus returns.

2.      If the resurrection is not true, our faith is useless. Verse 17- 19 “And if Christ has not been raised, your faith is futile and you are still in your sins. Then those also who have fallen asleep in Christ have perished. If in Christ we have hope in this life only, we are of all people most to be pitied”. But we have hope. In light of the resurrection, we need to be clear how we are going to live.

3.      What kind of resurrection is it going to be? “So is it with the resurrection of the dead. What is sown is perishable; what is raised is imperishable. It is sown in dishonor; it is raised in glory. It is sown in weakness; it is raised in power. It is sown a natural body; it is raised a spiritual body. If there is a natural body, there is also a spiritual body.” Our hope is that one day, we will be in the presence of God with a new spiritual body. A body that is perfect. Verse 50- 52 “I tell you this, brothers: flesh and blood cannot inherit the kingdom of God, nor does the perishable inherit the imperishable. Behold! I tell you a mystery. We shall not all sleep, but we shall all be changed, in a moment, in the twinkling of an eye, at the last trumpet. For the trumpet will sound, and the dead will be raised imperishable, and we shall be changed.”

The purpose of our life is to proclaim the gospel. One day we will pass through the doorway of death and be given a glorified body with which we will live forever. With our body, we will not survive heaven. We will have a glorified body.

Finally Paul says, “Therefore, my beloved brothers, be steadfast, immovable, always abounding in the work of the Lord, knowing that in the Lord your labor is not in vain.”
Life may be tough. But because of our hope, we give ourselves to his purposes.

Q. How are we living?