Where is your Strength? | Chris B 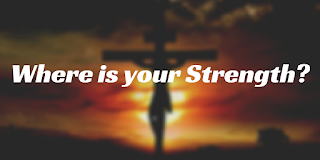 This message was preached  by Chris B at Word of Grace Church on April 9th, 2017. To listen/download the audio please click here.

We don’t grieve like those who have no hope. Each time someone dear passes away, we know we will see them again.

This week we celebrate Jesus’ triumphal entry into Jerusalem. We call it the Palm Sunday. As Jesus was entering Jerusalem, everyone had a certain expectation of the King who was prophesied. Hosanna in the highest. They expected to see strength.

Q. What is Strength?

On Palm Sunday, we see a picture of a king coming and reigning like the world never knew. This is depicted in Zechariah 9:9-17: “Rejoice greatly, O daughter of Zion! Shout aloud, O daughter of Jerusalem! Behold, your king is coming to you; righteous and having salvation is he, humble and mounted on a donkey, on a colt, the foal of a donkey. I will cut off the chariot from Ephraim and the war horse from Jerusalem; and the battle bow shall be cut off, and he shall speak peace to the nations; his rule shall be from sea to sea, and from the River[c] to the ends of the earth. As for you also, because of the blood of my covenant with you, I will set your prisoners free from the waterless pit. Return to your stronghold, O prisoners of hope; today I declare that I will restore to you double. For I have bent Judah as my bow; I have made Ephraim its arrow. I will stir up your sons, O Zion, against your sons, O Greece, and wield you like a warrior's sword. The Lord Will Save His People. Then the Lord will appear over them, and his arrow will go forth like lightning; the Lord God will sound the trumpet and will march forth in the whirlwinds of the south. The Lord of hosts will protect them, and they shall devour, and tread down the sling stones, and they shall drink and roar as if drunk with wine, and be full like a bowl, drenched like the corners of the altar. On that day the Lord their God will save them, as the flock of his people; for like the jewels of a crown they shall shine on his land. For how great is his goodness, and how great his beauty! Grain shall make the young men flourish, and new wine the young women”

People sang praises to God in fullness of joy at the coming of the king. So what is the strength that they expected from this King?

1.      The expectation of the crowds: The crowds were expecting a champion who will unify the world by political leadership and Israel will once again gain political importance. Jesus’ kingship was very different from political domination.

2.      The expectation of Jesus’ disciples: The disciples were looking for divine insurrection. They were looking for heaven’s support. Luke 9:51-56: “When the days drew near for him to be taken up, he set his face to go to Jerusalem. And he sent messengers ahead of him, who went and entered a village of the Samaritans, to make preparations for him. But the people did not receive him, because his face was set toward Jerusalem. And when his disciples James and John saw it, they said, “Lord, do you want us to tell fire to come down from heaven and consume them?” But he turned and rebuked them. And they went on to another village.” The disciples said, you are strong beyond all strength. They wanted him to demonstrate his own strength to annihilate the enemies. They were expecting a political king with a heavenly fire power.

3.      The expectation of Satan- Satan’s expectation was for Jesus show his own strength by independently asserting his reign. In Matthew 4:8- 10 Jesus’ encounter with Satan goes like this- “Again, the devil took him to a very high mountain and showed him all the kingdoms of the world and their glory. And he said to him, “All these I will give you, if you will fall down and worship me.” Then Jesus said to him, “Be gone, Satan! For it is written, “‘You shall worship the Lord your God and him only shall you serve.’” ” Satan thought Jesus just came to take the kingdoms in his own strength. We try to do this all the time.

Q. What is Jesus’ view of Strength?

Biblical strength never involves sin. Side- stepping pain wasn’t his idea of strength. Jesus’ view of strength was perfect submission. Luke 18: 31-34 “And taking the twelve, he said to them, “See, we are going up to Jerusalem, and everything that is written about the Son of Man by the prophets will be accomplished. For he will be delivered over to the Gentiles and will be mocked and shamefully treated and spit upon. And after flogging him, they will kill him, and on the third day he will rise.” But they understood none of these things. This saying was hidden from them, and they did not grasp what was said.” Jesus was telling his disciples that he is going to die for no guilt of his own but that he will rise again and come back!

Philippians 2:4-11- “Let each of you look not only to his own interests, but also to the interests of others. Have this mind among yourselves, which is yours in Christ Jesus, who, though he was in the form of God, did not count equality with God a thing to be grasped, but emptied himself, by taking the form of a servant, being born in the likeness of men. And being found in human form, he humbled himself by becoming obedient to the point of death, even death on a cross. Therefore God has highly exalted him and bestowed on him the name that is above every name, so that at the name of Jesus every knee should bow, in heaven and on earth and under the earth, and every tongue confess that Jesus Christ is Lord, to the glory of God the Father. ”

The ability to submit yourself completely to God- that is true Biblical Strength- the way Jesus did.

Luke 9: 23 “And he said to all, “If anyone would come after me, let him deny himself and take up his cross daily and follow me.” The call to Jesus is a call to deny ourselves. It is so good for us to sobermindedly see the death of Jesus.

In Hebrews 12: 2 Paul says speaking of Jesus, “who for the joy that was set before him endured the cross, despising the shame, and is seated at the right hand of the throne of God.” Nehemiah 8:10 says that the Joy of the Lord is our strength. The joy we have in Jesus is so great that we consider everything we have is rancid garbage. If you know him, you have deep joy. All of this makes sense. If you don’t know him, this is insanity. That is a helpful distinction for us. We have an honest assessment of ourselves- do I know him? What would you say? Where do you find your Joy? How long-lasting is it?