Don't Stop At The Cross 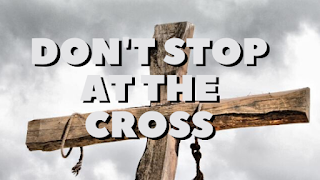 This message was shared by Debbie Vartak during the time we shared Communion together. This is part two of a two-part series. This was shared on Easter Sunday.

You have made me new…NOW life begins in You.

The Lion of Judah is roaring over us this morning. He has the victory !!!!!
Let us celebrate the death and burial and resurrection of Jesus as we come to the table

Luke 22: 19 – 20 Jesus says, “Do this in remembrance of me.” Even as He knows that He is to be the Passover Lamb and with this, our sin and past would be forgiven and forgotten, our sickness – healed, our names – written in the Lamb’s book of Life.
Death would Passover and hold no sting, the Grave would have no victory.

The question is are we still at the cross?
The Israelites were in their home eating the Passover lamb, (a shadow of the very same sacrifice that Jesus would be for mankind) the shed blood was on the doorpost when the angel of death passed over them, but they could not stay there.
Their deliverance entailed that they leave their homes and go with Moses through the Red Sea into the promise of God, into freedom and liberation and to the promised land -a land filled with milk and honey.

We need to move from the cross into the newness of life.   Three days had passed since the resurrection. Jesus joined the 2 men going to Emmaus in Luke 24. They had left Jerusalem and Golgotha physically, but mentally and emotionally and spiritually they were at the cross. “Are you the only visitor to Jerusalem who does not know what happened?” They were speaking to the resurrected Jesus who was present with them. Jesus said in Luke 24:25, “Oh, Foolish ones, was it NOT NECESSARY that Jesus suffers all these things AND ENTER INTO HIS GLORY?”

Today if we must enter the glory of the resurrection life, we must after experiencing the cross, leave the cross and go on to the next step, the next place, the next encounter with Jesus.

Vs 30 “When He was at the table with them, he took the bread and blessed and broke it and gave it to them.
Vs 35 they had recognized Jesus in the breaking of the bread.
Their eyes were opened, their eyes were unveiled.

As we come to the table, ask the Lord to open your eyes. Even as you experience salvation, You are now the righteousness of God, so bring your dreams, your desires, your aspirations, the prophetic words that were spoken over you, bring your lack, your fears and take a step from the cross and enter into his glory with him as sons and heirs of the King of Kings and Lord of Lords.

When they broke bread, their hearts burned within them. They forgot their sorrow because Hope had risen, and they immediately responded and returned to Jerusalem.

“The Lord is risen” they said
Let us drink the cup as part of the new covenant having experienced the forgiveness of sins and as we move from the cross into the glorious resurrection of Jesus, let the resurrection power and life of Jesus, seen in us, be the very reason people believe in Jesus.

Email ThisBlogThis!Share to TwitterShare to FacebookShare to Pinterest
Labels: breaking of bread, communion, The Cross