Joseph - From Prison To Palace 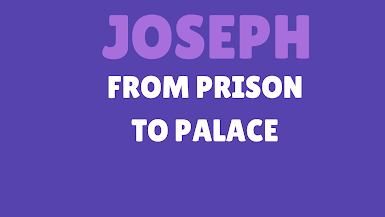 JOSEPH – FROM PRISON TO PALACE

Today, we will look at the life of Joseph. He is one of the four patriarchs, i.e. Abraham, Issacs, Jacob and Joseph. He is an important figure in the history of Israel.

This story beats any Hollywood or Bollywood story. From being favoured, Joesph gets thrown into prison; from being a special son, he becomes a slave.

Let us have a bird's eye view. Look at the irony with Jacob. He stole his brother's birthright by disguising himself in Esau's coat and goats hair.

In Chapter 37:31, Jacob is now deceived similarly by his sons. They dip Joseph's coat in goats blood.

Joseph is sold off into slavery, but he holds onto to the Lord. We will look at four things in the life of Joseph today.

Joseph was faithful through good and bad. He is one character in the Old Testament where you have no record of him doing any wrong, unlike Abraham, Isaac and Jacob. He led a righteous life.

Gen37:2 He was faithful to his father in that he reported the wrongdoings of his brothers.

V13 He went out to see his brothers. How was his faithfulness rewarded? His brothers were jealous of him and sold him as a slave.

Gen39 Joseph is now a slave in Potiphar's house. The Lord was with Joseph and whatever he put his hands to prospered. Others recognised his faithfulness.

Gen39:2 Potiphar's wife tries to seduce him, but Joseph resists temptation. V20. He was thrown into prison. He could have become bitter, but he continued to be faithful in prison.

He meets the cupbearer and baker who has dreams. He was faithful in interpreting them and serving people. They are released from the prison, and Joseph is forgotten by both of them.

God did not forget.

41:1 Pharaoh has a dream. Overnight Joseph moves from prison to the palace and becomes the Prime Minister of Egypt. Even here, he is faithful. 41:46 He was faithful in serving Pharaoh. 41:48

There was a famine in Egypt

Chapter 42. There was a famine in Egypt, and it affected the neighbouring countries as well. From chapter 42 to 50, we see how the story unfolds between Joseph and his brothers.

42:6, Joseph's brothers bow down (37:7). It took 20 years for that dream to be fulfilled. Although Joseph had power, he could have executed them or thrown them into prison.

Chpater45:4-8, I am Joseph. He reveals himself. Joseph had a godly perspective of what happened.

Chapter 50:19-20 But God intended everything for good. I will provide for you and your children.

Joseph had trusted in the sovereignty of God. He decided that he would be faithful and serve and honour God no matter what.

Rom12:12  we are called to be joyful in hope, patient in affliction and faithful in prayer.

God took Joseph from the prison and made him the P. M

What can we learn from this story?

·      We need to learn to trust God in all circumstances

·      Continue to do good in bad situations and to those who mistreat you. Col3:23 we will get rewarded by God for our faithfulness

Gen15:13, God appeared to Abraham and had prophesied to him about this event. The fourth-generation will come back here.

Gen 46:26 Bring your families and my father. Seventy of them came to Canaan. In Exodus 12:37 we see that Israel journeyed by Ram to Succoth. They were 600,000 men, not counting women and children. It is estimated that they were 2 million in all.

Gen 50:20 the saving of many lives." This was the sovereign purpose of God. Not one hair will fall to the ground without the father's knowledge.

Don't you want to be a part of this? Joseph did not know that 70 people would become 2 million. You do not know how your faithfulness will expand the Kingdom of God in the days to come.