Grace For A Zacchaeus 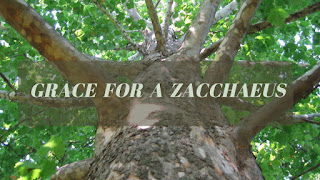 Why did Jesus come into this world? – To seek and save the lost.

Today, let us look into the story of Zacchaeus - Luke 19

Jesus entered Jericho and was passing through. – Luke 19:1

Where was Jesus headed?

From Luke chapter 9, we see that Jesus and His disciples travelled and many incidents were recorded through their travel. Now, He’s on a mission, walking towards Jerusalem where he would be crucified. He’s just given sight to a blind man. People around him were waiting in anticipation of what He would do next.

A man was there by the name of Zacchaeus; he was a chief tax collector and was wealthy. – Luke 19:2

He wanted to see who Jesus was, but because he was short he could not see over the crowd. – Luke 19:3

Nine years back, I was at this place. Not seeking Jesus but curious about Jesus. I had questions in my mind.  Today maybe you are at that same place.

So he ran ahead and climbed a sycamore-fig tree to see him since Jesus was coming that way. – Luke 19:4

Here, Zacchaeus was ready to leave his dignity behind. He was almost shameless only to know and see who Jesus was.

When Jesus reached the spot, he looked up and said to him, “Zacchaeus, come down immediately. I must stay at your house today.”  - Luke 19:5

Before this verse, we could imagine Jesus saying – Zacchaeus, you are an oppressor, you always cheated people, you are a traitor. But Jesus didn’t say anything of that sort. Instead, he said, “Zacchaeus, come down…”

We would think Zacchaeus was the seeker. No, it was Jesus who was seeking him.

From the story of Zacchaeus, you may ask, “What about the effort put by Zacchaeus?”

It was God who chose Zacchaeus. God chooses us. We don’t come to him. God draws us to Himself. Zacchaeus was able to make that effort because God had already chosen him. Seeking is not worthless. We need to keep seeking.

So he came down at once and welcomed him gladly.- Luke 19:6

Zacchaeus welcomed Jesus not just into his house but also into his heart.

At the beginning of this story, Zacchaeus was hated but now people started muttering about Jesus. Very soon this is what was going to happen to him. Everybody was going to mutter about him, mock him, and put a crown of thorns on his head.

We are not worthy of God but God made us worthy with His unconditional love.

But Zacchaeus stood up and said to the Lord, “Look, Lord! Here and now I give half of my possessions to the poor, and if I have cheated anybody out of anything, I will pay back four times the amount.” – Luke 19:8

We all know the rich man story. He kept all the commands and asked Jesus what else he can do to enter God’s Kingdom. Jesus asked him to sell all his possessions.

24 Again I tell you, it is easier for a camel to go through the eye of a needle than for someone who is rich to enter the kingdom of God.” – Matt 19:24

It is impossible for man. But with God it is possible. And that’s how Zacchaeus decided to give away half of his possessions to the poor and also to pay back the ones he cheated four times the amount.

Jesus said to him, “Today salvation has come to this house, because this man, too, is a son of Abraham. – Luke 19:9

When Jesus heard what Zacchaeus said, he declared that salvation has come to his house.

Jesus, the Son of Man came into this world on a mission. His mission was to seek and save the lost.

It was not by works, not by might but only by the grace of God.