An Encounter Of A Close Kind 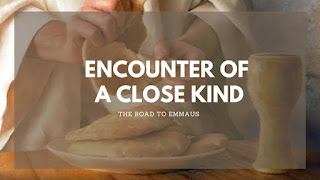 We are in a series of different appearances of Jesus after His resurrection. Last week, we looked at His appearance to His 12 disciples, especially to Thomas. This week, we will look at a beautiful encounter which two of His followers had with Him on the road to Emmaus. Let us read from Luke 24:13-35.

After Mary Magdalene and other women returned from the tomb and narrated what happened at the tomb, the disciples did not believe them.

On the same day, two of His followers were walking towards a village called Emmaus. While walking, they were talking about all the things that happened to Jesus.

15 So it was, while they conversed and reasoned, that Jesus Himself drew near and went with them. 16 But their eyes were restrained so that they did not know Him. – Luke 24:15-16

As they were talking and reasoning with each other, Jesus himself drew near to them. Though the followers saw Him, they did not know Him.

19 And He said to them, "What things?" So they said to Him, "The things concerning Jesus of Nazareth, who was a Prophet mighty in deed and Word before God and all the people, 20 and how the chief priests and our rulers delivered Him to be condemned to death and crucified Him. 21 But we were hoping that it was He who was going to redeem Israel. Indeed, besides all this, today is the third day since these things happened. – Luke 24:19-21

It was observed in their conversation and reasoning that they didn't believe in what was prophesied. Jesus saw their unbelief.

25 Then He said to them, "O foolish ones, and slow of heart to believe in all that the prophets have spoken! 26 Ought not the Christ to have suffered these things and to enter into His glory?"  - Luke 24:25

Jesus called them "foolish ones" because they didn't believe what was already prophesied about Jesus that the Son of Man would suffer and then enter into His glory.

27 And beginning at Moses and all the Prophets, He [g]expounded to them in all the Scriptures the things concerning Himself. – Luke 24:27

Not just that, but Jesus reminded them of all the scriptures prophesying about Jesus' birth, death and resurrection. Even at that time, the followers couldn't recognize Jesus.

After this, they all went to the nearby village and sat at a table to eat together.

30 Now it came to pass, as He sat at the table with them, that He took bread, blessed and broke it, and gave it to them. 31 Then their eyes were opened, and they knew Him, and He vanished from their sight. – Luke 24:30-31

When Jesus took bread, blessed it, broke it and gave it to His followers, it was then their eyes were opened, and at once, they knew Him. But Jesus vanished from their sight.

31 Then their eyes were opened, and they knew Him, and He vanished from their sight. 32 And they said to one another, "Did not our heart burn within us while He talked with us on the road, and while He opened the Scriptures to us?" 33 So they rose up that very hour and returned to Jerusalem, and found the eleven and those who were with them gathered together, 34 saying, "The Lord is risen indeed, and has appeared to Simon!" 35 And they told about the things that had happened on the road, and how He was [i]known to them in the breaking of bread. – Luke 24:31-35

This beautiful encounter two of Jesus's followers had with Jesus changed their life. This is what they got to know about Jesus that day.

1. Jesus is our Redeemer

The two disciples thought Jesus would redeem the nation Israel from Roman Empire. They expected Him to overthrow Roman rule and establish a Jewish kingdom in the nation of Israel.

Luke 24:21a - But we were hoping that it was He who was going to redeem Israel

Jesus came to redeem not just the people of Israel but all of us.

What did Jesus redeem us from?

He redeemed us from the bondage of sin and the curse of the law.

Ephesians 1:7 - In him, we have redemption through his blood, the forgiveness of sins, in accordance with the riches of God's grace.

Gal 3:13 - Christ redeemed us from the curse of the law by becoming a curse for us, for it is written: "Cursed is everyone who is hung on a pole."

Jesus is the only one who was resurrected and defeated in death. We need to go and tell people about Jesus' love for us. When we were just born again, we had a great enthusiasm to share the gospel. What about now? Do we still have the same enthusiasm? If anyone wants to know more about Jesus and His sacrifice, please reach out to one of us.

2. Jesus is the Word

Luke 24:25 – 25 Then He said to them, "O foolish ones, and slow of heart to believe in all that the prophets have spoken

The two disciples had read the scriptures about the Messiah, but they didn't believe in the Word of God. Jesus rebuked their unbelief.

The Word became flesh and made his dwelling among us. We have seen his glory, the glory of the one and only Son, who came from the Father, full of grace and truth. - John 1:14 NIV

Jesus is the Word, and He knows how to keep His promise because He is faithful.

2 Corinthians 1:20 -  For all the promises of God in Him are Yes, and in Him Amen, to the glory of God through us.

For no matter how many promises God has made, they are "Yes" in Christ. And so through him, the "Amen" is spoken by us to the glory of God.

It is impossible for God to lie. He never lies. So His Word is truth.

Let us all choose to believe in the Word of God. Let us start replacing the lies with truth.

4. Jesus is present at the breaking of bread

Luke 24:30-31 -  Now it came to pass, as He sat at the table with them, that He took bread, blessed and broke it, and gave it to them. 31 Then their eyes were opened, and they knew Him, and He vanished from their sight.

Luke 24:35 - And they told about the things that had happened on the road, and how He was [i]known to them in the breaking of bread.

The two disciples' eyes opened, and Jesus was known to them in the breaking of bread.

Breaking of Bread is not a ritual. It is a mighty and powerful thing because Jesus is present with us.

When we do the breaking of bread, we should not do it as a ritual, but we should remember the sacrifice Jesus did for us on the cross, and we should take it worthily. When we remember the Lord and take the bread and wine, mighty things happen in the spiritual realm.

1 Corinthians 11:24-25 - and when he had given thanks, he broke it and said, "This is my body, which is for you; do this in remembrance of me."  In the same way, after supper, he took the cup, saying, "This cup is the new covenant in my blood; do this, whenever you drink it, in remembrance of me."

I have a powerful testimony to share. My friends' son had an accident, and the brain stem was cut off. He was in a vegetable condition, and his parents were helpless. But because they believe in Jesus and the power of breaking bread, they decided to break bread together.  As they did that, their son opened his eyes and spoke. Doctors were amazed. Later on, the boy started walking, cycling, working, and now has his own company.

So, let us believe that Jesus is with us when we break bread. And as we do that, let us remember His sacrifice for us.

What did we learn from the passage today?

Jesus is our Redeemer. He is the Living God. He is present when we break bread.