Why Is The Resurrection Important ? 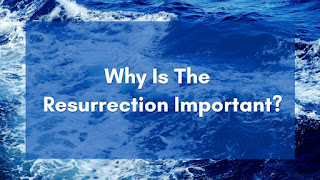 Last week we looked at the post-resurrection appearance of Jesus to 2 strangers on the road to Emmaus. Jesus also appeared to Peter as mentioned in 1 cor 15:5. The appearances of Jesus to these groups of people attest to the resurrection of Jesus and that he is alive forevermore.

Today we will look at the account of Jesus’ appearance to the disciples in Luke 24:36 onwards. The same account is also recorded in John 20.

In John 20:19 “On the evening of that day, the first day of the week, the doors being locked where the disciples were for fear of the Jews, Jesus came and stood among them and said to them, “Peace be with you.” When he had said this, he showed them his hands and his side. Then the disciples were glad when they saw the Lord.”

Why is the resurrection important?

The first thing that Jesus says when he sees the disciples is “peace be with you”. Receive the peace of God in this challenging situation.

At one time we were hostile to God. But what Jesus declared is peace. Jesus could have appeared in the synagogue and lorded it over the high priest for crucifying him. But there is no record of Jesus appearing to his enemies. There are only 2 categories of people – those who have peace with God and those who don’t have peace with God. We are born hostile to God. John 15: 15 “No longer do I call you servants, for the servant, does not know what his master is doing; but I have called you friends, for all that I have heard from my Father I have made known to you.” When we put our faith in Jesus, we are friends of God and peace with God.

Luke 24: 36 “36 As they were talking about these things, Jesus himself stood among them, and said to them, “Peace to you!” 37 But they were startled and frightened and thought they saw a spirit. 38 And he said to them, “Why are you troubled, and why do doubts arise in your hearts? 39 See my hands and my feet, that it is I myself. Touch me, and see. For a spirit does not have flesh and bones as you see that I have.”

John 20: 22 “And when he had said this, he breathed on them and said to them, “Receive the Holy Spirit.”

What is happening here?

Where did God breathe on people in the Old Testament? In the garden of Eden, Gen 2, God breathed on Adam when he created him and breathed life. That is the old creation, and this is the new creation through Jesus Christ.

John 20: 21 “As the Father has sent me, even so, I am sending you” This is the same for us as it was for the first disciples.

John 20: 23 “If you forgive the sins of any, they are forgiven them; if you withhold forgiveness from any, it is withheld” God has given us great authority. We need to proclaim the gospel to people.

Luke 24: 47 “and that repentance for[c] the forgiveness of sins should be proclaimed in his name to all nations, beginning from Jerusalem” This is one area we need to grow in. In today’s world, He wants us to hold out the hope of eternal life to people who are perishing physically and spiritually. But he says “But stay in the city until you are clothed with power from on high”

Word of Grace is an Evangelical (Born Again),  Spirit-filled (Charismatic), Reformed, English speaking church in Pune that upholds the Bible as God's inspired Word for life. We are a church community that has people from every part of India and parts of the world. We are here to put the Great Command and the Great Commission into practice by equipping and releasing every member into works of service.  Word of Grace is a part of a wider international family of Churches called RegionsBeyond.To know more about us please log onto www.wordofgracechurch.org.
By Navaz DCruz - May 04, 2021