The Kingdom Of God 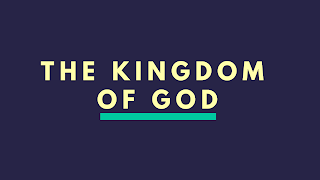 He gave us some clues as to how we are to seek His Kingdom, what is it like, and why is it important?

Is the Kingdom of God an NT concept? Jesus prayed, "Your Kingdom come".

Therefore, the KOG is an eternal concept before time began.

In the NT, Israel was under Roman rule. The Jews longed for a Messiah to come as a Saviour who would be a conquering King who would overthrow Rome. But Jesus comes as a King laying aside His majesty and divinity

1. WHAT IS THE KINGDOM OF GOD?

In today's age, we find it difficult to understand a Kingdom because all we have a picture of is a figurehead King/Queen who does not rule or have any authority or decision-making powers.

Let look at what is a real Kingdom.

A king has dominion, and he rules over people. His will is the law and is binding upon his subjects. In a real Kingdom, there are no elections, no opposition party, no votes. You cannot vote a king in or out.

God is King. In many languages, the word for King and God were one as the same. For example, the Jews prayed this before a meal" "The King of the universe…."

Since God is King, it is fitting to call him "Your Majesty"!!

When Jesus said all authority is given to me in heaven, and on earth, it means everything. God is King over history and of the nations. He is the KING of kings and the LORD of lords.

We do not see many descriptions for the Kingdom of God in the Bible because people knew what it meant in those days.  Like today no one needs to explain the term "Whatsapp me tomorrow". But maybe 50 years later or even 100 years later, people will need an explanation for that phrase. Like record player or cassette player needs to be explained to today's children.

2.   CHARACTERISTICS  OF THE KINGDOM OF GOD

While people in those days were familiar with what a kingdom looked like, Jesus was ushering in a different kind of Kingdom.

Jesus uses parable after parable, metaphor after metaphor, to describe the KOG.

It is like a house full of old and new treasures (Matt13:52)

The growth of the Kingdom of God will be like the one who sows. This  sower is the son of man, Jesus himself.

The good seed here is representing people. i.e people of the Kingdom.

The field is the world, not the Church.

Christians often think that you have to get as far away from the world as possible. Jesus said exactly the opposite. Just as the Father sent Jesus into the world, he said, I am sending you.

So we are sown into the world for kingdom purpose by Jesus himself. Whatever you do, wherever you are, think of it as Jesus has sown me here.

But the enemy, the devil, is at work as well. Some people think that if only the Kingdom of God grew and grew, there would be no evil in the world. But that is not true.

People ask will things get better or worse before Jesus return. The answer is both. The Kingdom will grow

So the Church grows while even the problems in the world grow. Sometimes the Church gets affected by what the enemy is doing because the weeds look like wheat, and we get confused. So even racism, materialism, corruption, and humanistic teaching can come into the Church.

That is why we have to keep pursuing  Kingdom righteousness in all that we do to bring His will and mindset and culture here on the earth.

ALREADY AND NOT YET

So overall, the Kingdom growsSo take a long term view. We think 20 years is a long time. But be encouraged. As we plant churches in this nation and across the world, Jesus is sowing sons and daughters of the Kingdom who cause the Kingdom to advance.

You may not see the whole picture in your life, but don't be discouraged. Evil grows alongside the good. Don't worry. The Lord is not slow to keep his promises as some may understand slowness. Instead, he is patient, not wanting anyone to perish but everyone to come to repentance.

The Note Dame cornerstone was laid in 1163 and completed in 1345. It took a long time. They were not in a hurry. Just do what you are meant to do.

Great pioneers like William Carrey and Joe Frazer had to wait seven years before they saw any converts.

It took seven years before we began to see a breakthrough. For seven years we would be happy to see 25 people. Then breakthrough slowly came. Nineteen years on, we have seen more than 700 people pass through our doors; we have seen scores born again and baptised here. But it took time and patience.

In the end, the righteous will shine like the Sun in the Kingdom of their Father. So you shine where Jesus has sown you.

3. WHERE IS THE KINGDOM NOW?

4. WHERE DOES THE CHURCH FIT IN?

What is the role of the Church concerning the Kingdom of God?

The KOG is the top priority. Jesus told us to seek the Kingdom FIRST (Matt 6:33)

Jesus told to pray, "Your kingdom come, your will be done.."

We are told the forceful men and women understand the Kingdom and advance the Kingdom (Luke 16:16), who strive to obtain its privileges with the utmost eagerness and effort.

The Church is the Apostolic representation of the KOG here on earth.

Ushering in the Kingdom is through preaching the gospel and expressing God's  Kingdom through culture, lifestyle, commerce, justice, creativity, family, marriage, science, etc.

The Church is not people who have just experienced salvation; we are a Royal nation (1Pet 2:9). We have a culture of our own.

So can I do without a church because I am part of the Kingdom? Is it like saying, I know how to shoot a gun, so can I go to the border and defend my country? No. You have no authority to do so. You need to join the army to be able to put that skill into proper use. You may know many things, but God has in His wisdom chosen for us to function with the Church. The Church is the legitimate means through which you can exercise your gifts and influence and favour God.

SO WHAT DO WE DO?

The purpose of the Kingdom of God is to see the image of God restored because men and women together were commanded to fill the earth and take and move everywhere.

Allow the Kingdom of God to alter every area of your life: Your choices, your character, your marriage, your family life, your attitude to work, how you engage your society, neighbourhood, your talents, your money. In short, everything.

When the Kingdom infuses our lives, we start changing the culture around us because it will work like yeast in the dough and influence everything.

Email ThisBlogThis!Share to TwitterShare to FacebookShare to Pinterest
Labels: Kingdom of God