The Perspective, The Promise, The Power 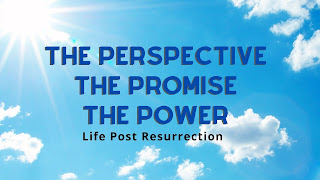 Summary: The Promise and the right Perspective give us the Power to Proclaim. Acts 1-10

1 The former account I made, O Theophilus, of all that Jesus began both to do and teach, 2 until the day in which [a]He was taken up, after He through the Holy Spirit had given commandments to the apostles whom He had chosen, 3 to whom He also presented Himself alive after His suffering by many [b]infallible proofs, being seen by them during forty days and speaking of the things pertaining to the kingdom of God.

4 And being assembled together with them, He commanded them not to depart from Jerusalem, but to wait for the Promise of the Father, “which,” He said, “you have heard from Me; 5 for John truly baptized with water, but you shall be baptized with the Holy Spirit not many days from now.” 6 Therefore, when they had come together, they asked Him, saying, “Lord, will You at this time restore the kingdom to Israel?” 7 And He said to them, “It is not for you to know times or seasons which the Father has put in His own authority. 8 But you shall receive power when the Holy Spirit has come upon you; and you shall be [c]witnesses to Me in Jerusalem, and in all Judea and Samaria, and to the end of the earth.”

9 Now when He had spoken these things, while they watched, He was taken up, and a cloud received Him out of their sight. 10 And while they looked steadfastly toward heaven as He went up, behold, two men stood by them in white apparel,

The book of Acts is like a second part of a 2 part book, Luke the author, is writing this to the same Theophilus to whom he had written the Gospel of Luke. So Luke continues from where the Gospel of Luke ended. We see a resurrected Jesus being seen by the Apostles for 40 days and Jesus continuing to teach them and remind them about the Promise of the Father, which He had spoken about earlier and speaking to them about the Kingdom of God.

All this while the Apostles had yet not grasped the full significance of what Jesus had just achieved on the Cross, we see them yet expecting Jesus to overthrow the Roman rule and establish the Kingdom of Israel. So Jesus again patiently, I would think, explains to them what their role is in the greater picture, about God being the supreme planner that He alone knows about the times and seasons, but Jesus also tells something amazing that they are going to receive power to be His witnesses not just in Jerusalem or just in Israel but in the whole world. And then the Apostles see something truly awe-inspiring, they see Jesus being taken up in a cloud and while they are seeing that two men in white apparel come and stand next to them.

If I had to summarize the message I have from this passage it would be this:

The Promise and the right Perspective give us the Power to proclaim.

Jesus mentioned the Promise of the Father, The Holy Spirit which God had promised long ago, we see this being repeated in different ways in the OT in Ezekiel 36:26-27 God says He will put His Spirit within us, in Joel 2:28-29 it says God will pour out His Spirit on all mankind, this was the verse which Peter quoted on Pentecost. The Holy Spirit was also something which the OT prophets and people longed for, in the OT the Spirit would ‘come upon’ people for a while in which they did great deeds- prophesied like Saul, or were valiant in battle etc. but the Spirit

of God would then depart. But for us, we have such a great Promise, that the Holy Spirit be our counsellor, our guide (John 16:13), our helper (Romans 8:26-27), He would be our Teacher (John 14:26), that we would have sweet fellowship with Him (2 Cor 13:14), Jesus had mentioned that He would not leave us as orphans, His Spirit with us is a fulfilment of that. In fact, Emanuel- God with us, is also this very promise, His Spirit with us, sealed until the day of redemption.

I was reading about this promise and one theologian (forgive me for I don’t remember the name) had this very interesting point to make, I am paraphrasing- Once we receive the Holy Spirit, The Spirit calmly becomes a part of our conscience, our inner being. So at all times, we have His counsel, the calm, still voice. Amazing isn't it?

That’s the Promise we have! Then what do we do with it? Is it only for us to be able to know the will of God in our personal lives as some may think? Jesus already answered this, which brings me to the second point:-

Our view has to be one of Eternity, about the Unseen and Permanent rather than just the seen and temporary. Having a Kingdom perspective means knowing that whatever we do now has some consequence in eternity, Jesus taught us saying even if you give someone a glass of water it will be rewarded, now I am not for one moment advocating: act to get a reward mentality, all I am saying is that our time this side of Jesus’ return is very short as compared to the time we will have that side, and if what we are doing is not going to be of any consequence in eternity then is it really worth our time? We have the Promise of the Holy Spirit, God with us, we need to realign ourselves with the Kingdom's purposes. Jesus spoke about Kingdom being near us and in us (Luke17: 20-21), he spoke of the Kingdom of God being like a mustard seed which when planted grows bigger than any other (Mark 4:30-32), we need to be living these verses out in our lives, advancing the Kingdom, planting, being the careers of God’s Kingdom. And as Jesus told the Apostles, the Spirit gives us power to do that.

In the New Testament, there are two Greek words used for power: Exousia and Dunamis

Exousia: means authoritative power, like a King has power over his subjects, that kind of power which can easily be abused.

Dunamis: means the ability/strength to do something. In the passage here, the word used is Dunamis- the strength and the ability to be witnesses of Jesus Christ.

Once there was a battalion of around 100 soldiers who were staring down a huge fort wall, made of huge boulders and stones, they had to bring that fort wall down. A local villager who saw this worked up the courage to ask them how only a 100 of them were going get this job done, so the Army men told him, “We have a cannon, you see?”,

the villager looked at the cannon and said “that's hardly 100 kgs in weight and even if the 100 of you throw it with all your might it will not break the wall”, the Army men said “ We have the cannonballs, we don’t have to throw the cannon”, the villager said “that’s even smaller, and will not even dent the wall”, the Army men still keeping their patience said “ No, you see we have the gunpowder too”, the villager was utterly confused and just gave them a look of bewilderment “This??” The Army men now at the end of their patience said, “We will ignite the gun powder and it will cause the cannonballs to be fired at the wall at great speed and with great force, and that will bring it down”, “Ah!” said the villager “its the fire ultimately which will bring it down, no spark, no power”.

-to bring down spiritual strongholds

-to do warfare in the heavenly

-to pray for the sick and afflicted

-to bring hope in hopelessness

-to be the salt and light

-to truly love to lay down one's life

-to preach the Gospel

Interestingly the word “Witnesses” is the word Martyr, and even though it does not necessarily mean that all of us will be martyred or have to be martyred, it truly means that the Holy Spirit gives us the power to be able to display true love: to lay down our life, to Proclaim Christ to the world in action and indeed.

So we see, the Promise of the Holy Spirit, and the Perspective of the Eternal Kingdom of God, give us the Power to Proclaim Christ in the World.