The Message of Christmas 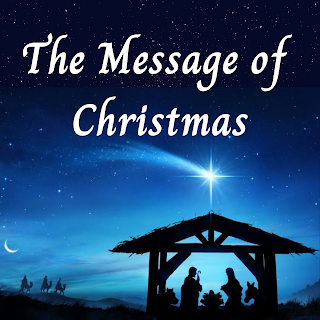 The Message of Christmas

We’re in the month of December. We can get so busy with celebrations around Christmas. We look forward to spending time with family with good food and all that. But in the midst of all that is happening, we need to remind ourselves of what Christmas is all about.

We have different festivals celebrated around the world. When we find out the reason for the celebration, we find that Christmas is the greatest celebration ever because we are celebrating God coming down as a man. It is a matter of life and death - for the whole of mankind. When we are inviting someone to come for our Christmas carol, it is a big thing- they get to hear and respond to the gospel.

Luke 1 : 5- 7 - “In the days of Herod, king of Judea, there was a priest named Zechariah, of the division of Abijah. And he had a wife from the daughters of Aaron, and her name was Elizabeth. And they were both righteous before God, walking blamelessly in all the commandments and statutes of the Lord. But they had no child, because Elizabeth was barren, and both were advanced in years.”

Herod is the king of Judea and Zechariah was the priest. Only the descendants of Levi could serve in the temple. Out of thousands of priests of the tribe, not everyone got an opportunity to serve in the temple. They had to draw lots of go in and light the incense. Today, we are the temple of God. When we come to serve God’s house, it is an honour. In the Old Testament, we would not even be able to enter the temple. Even the Jews could not do anything. Only a select from the tribe of Levi could do that.

Zechariah and Elizabeth were barren and were getting old. For 400 years before this there was no prophet of God- no word from God. Then suddenly, Zechariah hears God through the angel Gabriel. Zechariah was terrified when he sees the angel. The biblical picture of an angel is not a sweet baby floating on a cloud. They are fearsome creatures.

Luke‬ ‭1‬:‭12‬-‭13‬ ‭- “And Zechariah was troubled when he saw him, and fear fell upon him. But the angel said to him, "Do not be afraid, Zechariah, for your prayer has been heard, and your wife Elizabeth will bear you a son, and you shall call his name John.”

Elizabeth and Zechariah were past the age of childbearing, but Zechariah did not give up praying about it. We need to persevere in prayer.

Luke‬ ‭1‬:‭18‬-‭20‬ ‭- “And Zechariah said to the angel, "How shall I know this? For I am an old man, and my wife is advanced in years." And the angel answered him, "I am Gabriel. I stand in the presence of God, and I was sent to speak to you and to bring you this good news. And behold, you will be silent and unable to speak until the day that these things take place, because you did not believe my words, which will be fulfilled in their time."”

As a result of that he couldn’t speak till the baby was born.

‭‭Luke‬ ‭1‬:‭24‬-‭25‬ - “After these days his wife Elizabeth conceived, and for five months she kept herself hidden, saying, "Thus the Lord has done for me in the days when he looked on me, to take away my reproach among people."”

Q. What can we learn from Zechariah and Elizabeth?

This morning if you are in a situation that seems hopeless, pray into it. He does the difficult.

‭‭Luke‬ ‭1‬:‭26‬-‭33‬ ‭- “In the sixth month the angel Gabriel was sent from God to a city of Galilee named Nazareth, to a virgin betrothed to a man whose name was Joseph, of the house of David. And the virgin's name was Mary. And he came to her and said, "Greetings, O favoured one, the Lord is with you!" But she was greatly troubled at the saying and tried to discern what sort of greeting this might be. And the angel said to her, "Do not be afraid, Mary, for you have found favor with God. And behold, you will conceive in your womb and bear a son, and you shall call his name Jesus. He will be great and will be called the Son of the Highest. And the Lord God will give to him the throne of his father David, and he will reign over the house of Jacob forever, and of his kingdom there will be no end."”

Mary was a young teenage girl. Imagine receiving such a greeting and a word.

‭‭Luke‬ ‭1‬:‭35‬-‭37‬ ‭- “And the angel answered her, "The Holy Spirit will come upon you, and the power of the Most High will overshadow you; therefore the child to be born will be called holy—the Son of God. And behold, your relative Elizabeth in her old age has also conceived a son, and this is the sixth month with her who was called barren. For nothing will be impossible with God."”

God can do not just the difficult but he can do the impossible!

Q. What was Mary’s response?

‭‭Luke‬ ‭1‬:‭38‬ - “And Mary said, "Behold, I am the servant of the Lord; let it be to me according to your word." And the angel departed from her.”

Q. What is the real meaning of Christmas?

Galatians 4:4-5 - ““But when the fullness of time had come, God sent forth his Son, born of woman, born under the law, to redeem those who were under the law, so that we might receive adoption as sons.”

The Messiah was promised right from genesis. As time progressed more was revealed about the messiah. It all happened in the fullness of time. The Romans were in charge and controlled the whole world. So they built roads all over their empire. Those very roads were used for the proclamation of the gospel. The right time Jesus was born.

Christmas is a great opportunity for us to share the hope that we have. The real reason for Christmas is the important thing!