The Greatest Salvation | Chris B 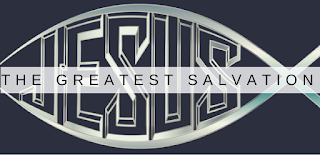 This message was preached  by Chris B at Word of Grace Church on July 9th, 2017. To listen/download the audio please click here.

Today, I have 3 goals- to re-introduce myself, to help you do your part of the introduction, and to tell you why we are here. We will let God’s word govern the situation and let it tell us who I am, who you are and why we are here.

So I am Chris, I’ve been a part of Word of Grace for over a couple of years now. I am delighted to be home, with my wife, my kids and with you. We are the church. We used to be different people in different places but now under him, we are one people.

Jeremiah 16: 14-17- ““On the other hand, don’t miss this: The time is coming when no one will say any longer, ‘As sure as God lives, the God who delivered Israel from Egypt.’ What they’ll say is, ‘As sure as God lives, the God who brought Israel back from the land of the north, brought them back from all the places where he’d scattered them.’ That’s right, I’m going to bring them back to the land I first gave to their ancestors. Now, watch for what comes next: I’m going to assemble a bunch of fishermen.” God’s Decree! “They’ll go fishing for my people and pull them in for judgment. Then I’ll send out a party of hunters, and they’ll hunt them out in all the mountains, hills, and caves. I’m watching their every move. I haven’t lost track of a single one of them, neither them nor their sins.”

The Israelites are in Egypt and they are calling out for a great salvation and God delivers them. It features God conquering the world’s super-power. This was the very thing that for Generations fathers would tell their sons. They celebrated this. They were known as the people whose God recued them from Egypt. Now going back to this statement in Jeremiah, He is saying that they will no longer be His name. Why? Because a salvation that is coming is so much greater that you won’t bother to celebrate the coming out of Egypt. You will lose it on the calendar and embrace this new and greater salvation. This new and greater name!

Once I went camping with a friend and in the middle of the night I thought I heard a bear. I went in search of it not knowing where it was. Then I realized the bear was my snoring friend. I have told this story countless times until I met this fine gentleman named Edgar in Nasik. When he snored, the floor shook and I was frightened! I said what manner of snore is this? I will never talk about the camping friend’s snore because I met this greater snore. In the same way, God is saying this new salvation is so much greater that you will forget about the earlier salvation.

In the earlier salvation, God came as a literal pillar of fire leading his people. But we know this greater salvation, not from human slave-masters but from the tyranny of death and sin. Through this salvation we have been adopted into his own family and will inherit everything he owns, which is everything.

Q. How will he accomplish this?

In verse 16, he is using us. Jesus came later and watched at the sea of Galillee. He said to his disciples to follow him and that he will make them fishers of men. He is quoting Jer 16, to gather them to be fishers of men and hunters. He is saying that he will send his people called by his name everywhere to bring them back to himself.

Then Jesus said Go and make disciples of ALL NATIONS, of all people everywhere! My name is Chris but the most important thing about me is that I am a fisher, a hunter of men!

You too are fishers of men, hunters of men. And when we catch men, women and children, we don’t bring death, but bring life. We come together to worship his name, and remind ourselves that we are part of this great salvation!

When was the last time you celebrated Passover? Never! It’s not even in the calendar. But we celebrate Easter every year. We are a part of the salvation that raises from the dead to brings to life. The amazing thing is that he is doing this right in our midst.

Let’s thank him in prayer.

Colin’s prophetic word:
When you see cars racing, then every so often they take a pit-stop. Then the car joins the race abck again. We were these cars in a great race. Some of us have stopped at the pit-stop and we got comfortable there and did not join the race. Our coming to the Sunday meeting is not the race, it’s the pit-stop. Our going out and making disciples is the race. The goal is to take the gospel and make disciples of nations. What will propel us to get out of the pit-stop and join the race? The Holy Spirit. This morning, if you would like to receive a touch from the Holy Spirit and receive power to fulfill your purpose, please receive him.
Word of Grace is an Evangelical (Born Again),  Spirit filled (Charismatic), Reformed, English speaking church in Pune that upholds the Bible as God's inspired Word for life. We are a church community that have people from every part of India and parts of the world. We are here to put the Great Command and the Great Commission into practice by equipping and releasing every member into works of service. To know more about us please log onto www.wordofgracechurch.org.