SHARPEN 2017- Mission and the Church 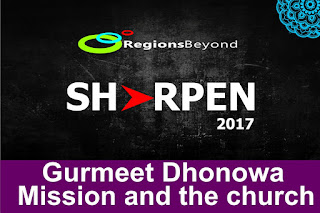 This message was preached by Gurmeet Dhanowa of Tri-City Asha Church at the Regions Beyond Leaders gathering in India in July 2017.
For the audio please Click HERE

I got very excited about mission as a young boy. I had a good friend in the training in Goa. He told me stories of missionaries. As I heard these stories, something was burning in my heart. Eventually I got married. After that he spoke to both of us about moving within Mumbai and then moved to Punjab.

Definitions of mission- the vocation/ calling of a religious organisation, especially of the Christian organisation. An important job, especially a military one, where someone is sent somewhere to do.
Mission starts with God.

John 3:16- God so loved the world that he sent his son. Mission started in eternity. We know the Great Commission.

Matthew 28:18-20. But mission did not start from there. It started even before the world was created. God desired for a community. The Trinity itself is a community. But He desired a worshipping community of people for himself. So when He made Adam and Eve, He said, Go and fill the earth. I think one of things he meant was to fill the earth with His glory. But we know they blew it.

As we move ahead, we see the tower of Babel incident. All humans spoke the same language. They wanted to build the tower which would reach heaven. They were proud and arrogant. So God confused their language, but He did not destroy them- He scattered them. God wants a worshipping community for Himself and in order to do that. He scatters His people first. There was a judgment on them, but it was more than that.

Then for 70 years Israel was in captivity. It must have been difficult for them to believe. But If God didn’t do it, Daniel and Esther, wouldn’t be speaking to Pagan kings. There was only one Missionary the nation of Israel had and it was Jonah, and you know how he went. He didn’t want to go and God had to really force him to go there, to Nineveh which is Mosel in Iraq now. That is one of the few places in Middle-eastern countries where there is a sizeable Christian population. In the Old Testament, God gave them a vision, but they missed it. They couldn’t catch what God wanted to do. They started considering themselves an exclusive group of people.

Then in the New Testament, John the Baptist arrives and proclaims Jesus. Jesus touched many non-jewish people. Samaritan woman, centurion, etc. Jesus had begun to do what God planned for them from the beginning. He wanted a worshipping community. Then in Acts 1, Jesus says, you shall be My witnesses. The holy spirit will come upon you and you shall be witnesses to the ends of the earth. So that was Jesus commissioning them. Then we see in the New Testament- The church in Jerusalem was doing well. They were growing, signs and wonders were taking place. Then suddenly a huge persecution breaks out to the point that people have to flee the city. Then they become missionaries to all those different cities.

The early Christians had the words of Jesus, and the great Commission. Jesus told them to go into all the nations- preach the gospel, make disciples, baptise them. They took this very seriously. They could have responded in regret and bitterness, or preach the gospel wherever they went. The gospel breaks out into the entire asia and Europe. They took it seriously.

We see the story of Paul. As we read his life, his transformation. He is full of fire. Once he started, he never stopped. From Jerusalem to Antioch and then he went from one city to the next. He was labouring! He says, I have lived in plenty and I have lived in little. He has gone through great persecution. He had a mission in front of him. Jesus before going to heaven, commanded us to go into all the world and make disciples. So Paul took that seriously and until the end, he was passionately preaching the gospel. He is always thinking of going beyond.
His life excites me.

William Carey- Came to India in a ship against the recommendation of his pastor, lost his sons to a curable disease, wife to madness and his printing press to fire. He rebuilt it and started from the scratch. Reading these biographies of these missionaries produces in us a fire to do the same thing.

Q. Why did they pay such a cost?
I know of one missionary where God spoke to him about going somewhere after he got engaged. The fiancée did not want to go. So he left her. They were passionate about the Great Commission.

The Great Commission is not an option to be considered, but a command to be obeyed – Hudson Taylor

I am not against quality, but the missionaries, they are not bothered about any material comforts. But what they are serious about is that they’ve got a strategy to reach the unreached. They have a map, gather their trainees and train them, and send them off to different places. They have a strategy of how to go to people. they just pray for the first 7 days. 90% of the time, someone comes and asks about what was going on. so they share the gospel. They start meeting and see people coming in and getting saved. They may not have what we have, but they see souls being saved.

Last Sunday we had baptisms at our church. We went to a Bible College building. It was like a haunted place. But in their hall they had painted this map of India and wrote what they want to achieve- the number of cities and villages. They train and send people.

We need to teach our people about mission. We must have a strategy to reach our nation. We are praying for 100 men and women who will go for church planting.

While he was on earth, Jesus taught his disciples that “this gospel of the kingdom will be proclaimed throughout the whole world as a testimony to all the nations, and then the end will come” (Matt. 24:14). That end is not yet, which means that the end of mission is not yet. We remain under the command and commission of our Lord and King to reach the world with the saving good news of his life, death, resurrection and ascension. However, one day, the task will be completed, and the fruit of the Son’s mission will be seen when an innumerable multitude from every nation and tribe and people and language stands before his throne and cries out, “Salvation belongs to our God who sits on the throne, and to the Lamb!” (Rev. 7:9–10). On that day, mission will be no more, but true worship will only have just begun.