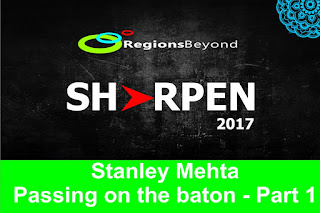 This message was preached by Stanley Mehta of Gateway Ministries at the Regions Beyond Leaders gathering in India in July 2017.


PASSING ON THE BATON – Stanley Mehta

A relay race is successful, when the baton has been passed on successfully to the next runner. This is true in the Christian life too. Across our country, we have mission organisations that have been around for the past 200 years. They made many sacrifices to build what they have but they have not passed on the baton successfully.

We too have a similar challenge before us. Will we pass on from one generation to the next and well?

Let’s look at some character sketches

1.    ABRAHAM
Three visitors came to visit Abraham It appears that one of them was Jesus and the other two were angles.
We have known of God as the God of Abraham, Isaac and Jacob. We see that the father’s faith is passed down. Abraham lived for 175 years ( Gen 25:7-9). Isaac and Ishmael were there to bury him. We see that there are successors. The promise given to Abraham was not just for him but for generations to come. Are we concerned for the next generation? We need to think about this – in the natural and the spiritual.

2.    DAVID
A man after God’s own heart (1 Cro 29:26-28). He ruled Israel for 40 years. He died at a good old age. His son succeeded him as King i.e Solomon. The definition of having success is having a successor. Do we have one? Are we raising them up?
Solomon wrote 3000 proverbs. HE often says “my father said to me” i.e the proverbs are none other than that of David. It means that David did spend time with his son and passed these on to him.
We need to be careful to pass on to the next generation.

3.    SOLOMON
He was considered the richest and the wisest man that ever lived in his time. All the coins were made of gold. His throne was made of ivory. His vessels were of gold. His throne has 12 gold cast lions . He had 14,000 chariots etc. Though wise, we do not think he was wise in every area. He has 700 wives and 300 concubines.

HE was successful by worldly standards. He wrote Song of Songs. HE wrote 1005 songs.
He wrote the book of proverbs in his middle years. In his old age he wrote Ecclesiastics.

Eccel. 2:17-23 you see deep regret about all that he has done. He is despairing about his labour and who would succeed him.
You can imagine Solomon on his deathbed. He was feeling that everything was meaningless.

Solomon did not have time for his children. No sooner did Rehoboam become king tragedy struck. Ten tribes broke away and formed the Northern Kingdom. What had been grown between David and Solomon is lost in an instant. Solomon can see it coming but it is too late. He knew that the baton was going to be dropped. So, if we ask Solomon what is true success, he would say it is to have a successor.

PAUL
Paul is in prison writing his last letter i.e 2 Timothy. He is about to be beheaded. He knows his time is up.
2 Tim 4:6-8 I have fought the good fight… Paul has no regrets – he is sure of his crown. He has no regrets because he has reproduced himself in Timothy and Titus. Different people accompanied Paul on his journeys – 19 people in all. He deploys them in different areas.
Paul instructs Timothy to carry passing it on.

Joshua passed it on to his people towards the end of his life. Whatever God said He would do, he does.
He asked them to choose whom they wanted to serve. “As for me and my house we will serve the Lord” was Joshua’s reply. Jud 2:7 People served God all the days of Joshua and the elders who outlived him. But in Jud 2:10 came a generation that did not know God and went after other Gods. This is a warning. The life we have can be lost very quickly.

WE need to start now

2.    2 From whom will you pick up this baton? WE need someone to mentor us. Who are we modelling after? If you do not have a close life with your mentor, his DNA won’t be in you.

4.    Are you faithfully passing this on? You will run together for a few years before you pass it on.