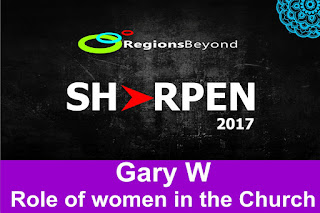 This message was preached by Gary W of Urban Voice Church at the Regions Beyond Leaders gathering in India in July 2017.
For the audio please Click HERE
The last few decades have seen a great deal of change in the church’s understanding & practice
on the subject of the role that women can play in leadership. During the days when our family of
churches was known as New Frontiers International the initials (NFI) were interpreted to mean No
Females Included. This was particularly aimed at the view and belief that the bible prohibits
women from being elders but, almost certainly, was a comment on the observation that few
women seemed to be involved in leadership at an influential level. Whether those observations
were universally true or not, the fact remains that most senior (not just eldership) leadership roles
were limited to men.

What I want to do over these two sessions is to examine relevant scriptures and provide a
foundation from which we will then look at how this should be worked out in an Indian context.
We’ll begin to do this in gender groups and finish with some time altogether. I hope that we will be
able to agree some basic biblical principles but also that we will be able to agree practical steps
about how to move forward. Some assessment of current practice will be necessary.

Let me be clear from the outset that I have settled on the view that women are able to fulfil every
leadership role in the church excluding eldership.


We have to begin at the beginning and that means we begin with God. He made us and he made
us with a plan and purpose in mind. He also made men and women in his image; we are not the
product of evolution or cosmic accident. God has appointed men and women to be rulers, on his
behalf, over the rest of creation.
Genesis 1 v26-31;
“Then God said, "Let us make man in our image, after our likeness. And let them have
dominion over the fish of the sea and over the birds of the heavens and over the livestock
and over all the earth and over every creeping thing that creeps on the earth."
27 So God created man in his own image, in the image of God he created him; male and
female he created them.
28 And God blessed them. And God said to them, "Be fruitful and multiply and fill the earth
and subdue it, and have dominion over the fish of the sea and over the birds of the heavens
and over every living thing that moves on the earth."
29 And God said, "Behold, I have given you every plant yielding seed that is on the face of
all the earth, and every tree with seed in its fruit. You shall have them for food.
30 And to every beast of the earth and to every bird of the heavens and to everything that
creeps on the earth, everything that has the breath of life, I have given every green plant for
food." And it was so.
31 And God saw everything that he had made, and behold, it was very good. And there was
evening and there was morning, the sixth day.”

Genesis 2 v15-23;
“The LORD God took the man and put him in the garden of Eden to work it and keep it. And
the LORD God commanded the man, saying, "You may surely eat of every tree of the
garden, but of the tree of the knowledge of good and evil you shall not eat, for in the day
that you eat of it you shall surely die." Then the LORD God said, "It is not good that the man
should be alone; I will make him a helper fit for him." Now out of the ground the LORD God
had formed every beast of the field and every bird of the heavens and brought them to the
man to see what he would call them. And whatever the man called every living creature,
that was its name. The man gave names to all livestock and to the birds of the heavens and
to every beast of the field. But for Adam there was not found a helper fit for him. So the
LORD God caused a deep sleep to fall upon the man, and while he slept took one of his ribs
and closed up its place with flesh. And the rib that the LORD God had taken from the man
he made into a woman and brought her to the man. Then the man said, "This at last is bone
of my bones and flesh of my flesh; she shall be called Woman, because she was taken out
of Man."

• God’s plan
God made a decision to make both male and female and not a sexless creature; an androgyny.
He could have chosen to create life in any form he wanted and what he wanted was male and
female. Two creatures the same in many respects but with distinct and significant differences.

• God’s image
Men and women are both made in the image of God. Therefore, each have the same dignity,
honour and value.

• God’s delight
Throughout the account of creation in Genesis 1 God declares “…And God saw that it was
good…” Only at the end of the sixth day when both the man and the woman have been created
does the account record; “And God saw everything that he had made, and behold, it was very
good.” God takes delight in both male and female.

• God’s appointment
In Genesis 2 v15-18 God gives the man and the woman complimentary roles in his creation; “The
Lord God took the man and put him in the Garden of Eden to work it and to keep it…it is not
good (the only time God finds something not good) for man to be alone; I will make a helper
fit for him.” The man is to work and to keep (or take care) and the woman is to help him. It is
beneficial to remember that the word helper occurs twenty one times in the Old Testament and is
applied to God sixteen times. Therefore, this is a critical appointment for the “very good” working
of God’s creation and our understanding of “helper” should primarily be determined by that truth.

• God’s command and question
It is worth taking note that God gave the man the command not to eat of the fruit of the tree of
knowledge of good and evil (who presumably then passed that command on to the woman) and
that after the act of rebellion it was to the man that God initially addressed his questions about the
act of disobedience.

Our main concern is the role of women in the effective work of glorifying the name of Jesus
through the building the church. There has been a great deal of frustration among women as they
seek to work out their calling and gifting in this regard. Some of that frustration relates to a lack of
clarity about permissible areas of service but also a perceived (and actual) lack of encouragement from elders and other leaders.

One of the major pictures that Paul gives us in the New Testament to help us understand how the
church serves Christ, is the body. It is a picture that he uses in letters to a number of churches in
different locations. We are to understand that the church is the body of Christ and that it is called
and empowered by the Spirit to do his unfinished work.
Ephesians 4 v11-16; “And he gave the apostles, the prophets, the evangelists, the
shepherds and teachers, to equip the saints for the work of ministry, for building up the
body of Christ, until we all attain to the unity of the faith and of the knowledge of the Son of
God, to mature manhood, to the measure of the stature of the fullness of Christ, so that we
may no longer be children, tossed to and fro by the waves and carried about by every wind
of doctrine, by human cunning, by craftiness in deceitful schemes. Rather, speaking the
truth in love, we are to grow up in every way into him who is the head, into Christ, from
whom the whole body, joined and held together by every joint with which it is equipped,
when each part is working properly, makes the body grow so that it builds itself up in love.”

• One restriction
A multitude of books have been written and countless sermons preached on whether or not
women are called to be elders (aka overseers, pastors, shepherds, bishops). The biblical debate
centres on, but is not limited to, passages in 1 Timothy and Titus. Time and space prevent
anything but a very light skim over the surface of the issue. However, on the basis that the NT
does not record any woman as an elder, 1 Timothy 2 commands that women should not teach or
have authority over a man, the eldership qualification passages in 1 Timothy and Titus contain
specifically male qualifications and the weight of history lead me to believe that women should
not be elders. Please hear this in the context that everything else is permitted.

If it is clear (according to me) that the New Testament prohibits women from being elders it is also crystal clear that they have a significant role in Jesus’ ministry and in the development of the early church that should be reflected as we seek to build the church today.

• Jesus’ ministry
Jesus chose twelve men as his disciples but his attitudes and practice with regard to women was
counter-culture. Mary Magdelene, Joanna and Susanna were a significant part of his support
team (Luke 8), Mary is encouraged to be part of Jesus “Rabbi circle” (Luke 10) and a number of
women (including Mary Magdalene, Joanna and Mary the mother of James) are entrusted with the
task of telling the apostles about Jesus’ resurrection. Our attitude, understanding and practice
should be suitably shaped by these facts.

• Early church
The lead that Jesus gave in including women at the heart of his ministry is continued in the
development of the early church. Luke records that Priscilla (first named) and Aquila take Apollos
aside and teach him “…the way of God more accurately.” Paul notes the role that Timothy’s
mother and grandmother played in his faith. Paul acknowledges Euodia and Syntiche as coworkers
(Philippians 4) and Romans 16 contains many women whom Paul recognises as a vital
part of the proclamation of the gospel.

Surely the proper reading of scripture should lead us to pursue leadership teams
that include both men and women on the basis of individual gifting. Elders will clearly be part of
those teams but should not be the only people who influence the way in which our churches seek
to glorify God. For this to be true it is necessary to give all leaders both responsibility and
authority in the context of accountable team relationships.