So how shall we live now? | Colin D 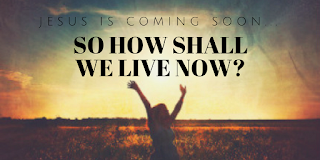 This message was preached  by Colin D'cruz at Word of Grace Church on April 15th , 2018. To listen/download the audio please click here.

There was a time many years ago where people said Jesus is coming soon and lived irresponsibly. People are very intrigued about Jesus’ return.

Q. What does God say about his return and what is our response?

First thing is the Jesus is definitely coming back. But we are not called to speculate when he comes back because no one knows.

Q. So does it matter how we live?

Philippians 1:21 – 23 “For to me, to live is Christ and to die is gain. 22 If I am to go on living in the body, this will mean fruitful labor for me. Yet what shall I choose? I do not know! 23 I am torn between the two: I desire to depart and be with Christ, which is better by far”
Paul is saying that to be with Jesus is gain and is far better than anything on this earth. But in the interim, how shall we live?

Matthew 25:
“14For it will be like a man going on a journey, who called his servants and entrusted to them his property. 15 To one he gave five talents, to another two, to another one, to each according to his ability. Then he went away.”

This is in the context of his return.  One talent is a lot of money- it was approximately 20 years’ wages. He gave it to them each according to his ability. Everyone doesn’t get something equal.

“16 He who had received the five talents went at once and traded with them, and he made five talents more. 17 So also he who had the two talents made two talents more. 18 But he who had received the one talent went and dug in the ground and hid his master's money.”
We have different responses to this money the master has given them. So the 2 workers were very diligent. The third one just dug a hole and kept it.

19 Now after a long time, the master of those servants came and settled accounts with them. 20 And he who had received the five talents came forward, bringing five talents more, saying, ‘Master, you delivered to me five talents; here, I have made five talents more.’ 21 His master said to him, ‘Well done, good and faithful servant. You have been faithful over a little; I will set you over much. Enter into the joy of your master.’

The master commends the character of the servant. The servant was faithful with a lot of money from his perspective. But it was little to the master's eyes. In Luke, it says, people who were faithful with their minas, were given cities to rule. The reward is far more than what they have laboured with.

22 And he also who had the two talents came forward, saying, ‘Master, you delivered to me two talents; here, I have made two talents more.’ 23 His master said to him, ‘Well done, good and faithful servant. You have been faithful over a little; I will set you over much. Enter into the joy of your master.’ 24 He also who had received the one talent came forward, saying, ‘Master, I knew you to be a hard man, reaping where you did not sow, and gathering where you scattered no seed, 25 so I was afraid, and I went and hid your talent in the ground. Here, you have what is yours.’ 26 But his master answered him, ‘You wicked and slothful servant! You knew that I reap where I have not sown and gather where I scattered no seed? 27 Then you ought to have invested my money with the bankers, and at my coming I should have received what was my own with interest. 28 So take the talent from him and give it to him who has the ten talents. 29 For to everyone who has will more be given, and he will have an abundance. But from the one who has not, even what he has will be taken away. 30 And cast the worthless servant into the outer darkness. In that place there will be weeping and gnashing of teeth.’

Q. How did the master respond to the one who had one talent?

He was reprimanded. He spoke about his character as well. There was punishment. His talent was taken and given to the one who had 10.

Q. How can we apply this parable to our lives?

These are the words of Jesus talking about the kingdom of Heaven. This is how it is going to be like at his second coming. Jesus is the master and the servants are people who have been entrusted with something.

Q. What are we entrusted with?

1.      They can be spiritual gifts- prophecy, evangelism, leading, giving, tongues... there are all kinds of gifts. The Holy Spirit gives according to his will.
2.      Skills and abilities- art, music, public speaking, etc. Jesus has given us all of these.
3.      Time and opportunities have been given to us. We don’t know how much time we have.
4.      Assets- money, vehicles, houses, etc. everything that we own has also been given to us by God.

While we are on earth we have to multiply all these things. God wants you to increase what you have. Jesus gives us this parable to motivate us to godly productive living. We can think we are not losing what God has given and that is enough. But there is no neutral in the kingdom. He who does not gather, scatters. We have to learn from the 2 servants who took the talents at once and multiplied them.

Q. What did the unfaithful servant do?

Q. What are the talents God has given you?

Have you done something with the talents God has given you? Recognise your talents and do something with it. Rev 22:12 “Behold, I am coming soon, bringing my recompense with me, to repay each one for what he has done.”

In Phil 3:20 Paul writes about the second coming saying “But our citizenship is in heaven, and from it we await a Savior, the Lord Jesus Christ, 21 who will transform our lowly body to be like his glorious body, by the power that enables him even to subject all things to himself.”

But while we are waiting here, we need to work for the Kingdom. Titus 2:11- 14 “For the grace of God has appeared, bringing salvation for all people, 12 training us to renounce ungodliness and worldly passions, and to live self-controlled, upright, and godly lives in the present age, 13 waiting for our blessed hope, the appearing of the glory of our great God and Savior Jesus Christ, 14 who gave himself for us to redeem us from all lawlessness and to purify for himself a people for his own possession who are zealous for good works.”

One way we can confirm we are possessors of eternal life is by the fruit we produce.
God wants to reward you much beyond what we have today in this life and in the life to come. Do something! Jesus is coming back and is going to take an account of what we have done.


Word of Grace is an Evangelical (Born Again),  Spirit filled (Charismatic), Reformed, English speaking church in Pune that upholds the Bible as God's inspired Word for life. We are a church community that have people from every part of India and parts of the world. We are here to put the Great Command and the Great Commission into practice by equipping and releasing every member into works of service. To know more about us please log onto www.wordofgracechurch.org.
By Las V - April 17, 2018

Email ThisBlogThis!Share to TwitterShare to FacebookShare to Pinterest
Labels: Do Something, Parable of talents, Rewards, Second coming