Where will you spend eternity? | Colin D 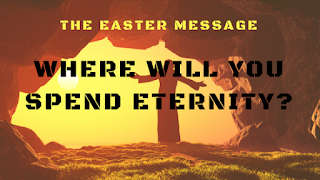 This message was preached  by Colin D'cruz at Word of Grace Church on Easter Morning, April 1st, 2018. To listen/download the audio please click here.

The resurrection is the greatest event in history. Even the death of Jesus is viewed through the lens of his resurrection.

Revelation 1:18 “I am the Living One; I was dead, and now look, I am alive for ever and ever! And I hold the keys of death and Hades.”

Acts 2:24 “But God raised him from the dead, freeing him from the agony of death, because it was impossible for death to keep its hold on him.”

Romans 10:9- “If you declare with your mouth, “Jesus is Lord,” and believe in your heart that God raised him from the dead, you will be saved.”

Acts 4:10 “then know this, you and all the people of Israel: It is by the name of Jesus Christ of Nazareth, whom you crucified but whom God raised from the dead, that this man stands before you healed.”

So many scriptures speak about Jesus’ resurrection from the dead and that is what we are celebrating this morning.

Q. How important is the resurrection?

It is the greatest event in History because it determines where you and I will be a 100 years from now. Look around you- do you know that we are eternal beings. We are going to live forever. Every human being will live forever- either in heaven or in hell. We will be glorified bodies. Our belief in the resurrection will determine where we spend eternity.
Matthew 28:1-10 “After the Sabbath, at dawn on the first day of the week, Mary Magdalene and the other Mary went to look at the tomb.2 There was a violent earthquake, for an angel of the Lord came down from heaven and, going to the tomb, rolled back the stone and sat on it. 3 His appearance was like lightning, and his clothes were white as snow. 4 The guards were so afraid of him that they shook and became like dead men.5 The angel said to the women, “Do not be afraid, for I know that you are looking for Jesus, who was crucified. 6 He is not here; he has risen, just as he said. Come and see the place where he lay. 7 Then go quickly and tell his disciples: ‘He has risen from the dead and is going ahead of you into Galilee. There you will see him.’ Now I have told you.”8 So the women hurried away from the tomb, afraid yet filled with joy, and ran to tell his disciples. 9 Suddenly Jesus met them. “Greetings,” he said. They came to him, clasped his feet and worshiped him. 10 Then Jesus said to them, “Do not be afraid. Go and tell my brothers to go to Galilee; there they will see me.””

On the Sabbath the Jews do no work. Everything is shut. Even pressing a button on the lift is considered work. So the lift automatically goes from floor to floor. It was very important. So, the Ladies left the tomb on Friday night and came back Sunday morning.

There was a violent earthquake. This is the first supernatural thing happened. The angel rolled the stone back- it wasn’t for Jesus to get out, it was for the ladies to get in. We know that the angel was a powerful presence from God. The Roman guards were ferocious and strong and no one dared to mess with them. But they saw the angel and were terrified. They shook and fell to the ground.

The angel’s first words were- do not be afraid. They went into the tomb and saw Jesus’ clothes lying there. The women must have been full of joy seeing and hearing what the angel had to say. So, they were afraid yet filled with joy. If we believe the resurrection, we will be filled with joy.

Q. How do we know they were filled with joy?

They ran to tell the disciples. These are older women, who were so filled with joy that they ran.

Even when he met the disciples, they didn’t believe him, so he asked for something to eat. Then Thomas also checks if he is the real Jesus. Later he is convinced and says, ‘my
Lord and my God’.

Q. What difference does it make to us that Jesus was raised from the dead?

If Jesus has not been raised, there is no hope for us. We are still in our sins and we will die in our sins. Paul had a successful life. Then one day he met the risen Lord, and from then, he became the persecuted. He was beaten and stoned. He writes that we are living from the resurrection from the dead. “But Christ has indeed been raised from the dead, the firstfruits of those who have fallen asleep.” We are the following fruits who will come to life one day. Our bodies are like a seed. The seed looks nothing like the tree or the fruit. Paul is saying the same thing in 1 Corinthians 15- “35 But someone will ask, “How are the dead raised? With what kind of body will they come?” 36 How foolish! What you sow does not come to life unless it dies. 37 When you sow, you do not plant the body that will be, but just a seed, perhaps of wheat or of something else. 38 But God gives it a body as he has determined, and to each kind of seed he gives its own body. 39 Not all flesh is the same: People have one kind of flesh, animals have another, birds another and fish another. 40 There are also heavenly bodies and there are earthly bodies; but the splendor of the heavenly bodies is one kind, and the splendor of the earthly bodies is another. 41 The sun has one kind of splendor, the moon another and the stars another; and star differs from star in splendor. 42 So will it be with the resurrection of the dead. The body that is sown is perishable, it is raised imperishable; 43 it is sown in dishonor, it is raised in glory; it is sown in weakness, it is raised in power; 44 it is sown a natural body, it is raised a spiritual body.”

Our hope is that we will be placed in the earth like a seed and will be raised to life again. If there is anyone this morning who has not yet put their trust in Jesus, today is the day of salvation.

Q. If you didn’t believe in Jesus, would your life be any different from what it is today?

Our lives must be different. If you watch any of those action serials, there is a hero who goes through a lot of challenges. There is threat to his life every day. But if you are watching season 4, and there is season 5,6 and 7, you know he is not going to die right now. That should be our confidence. There is more to come, so we have no fear of death. It is not the end. We will be with Jesus forever and ever.

In Jesus we have the hope of heaven- where there is no more death, sickness and pain. Because he lives, we also will live!