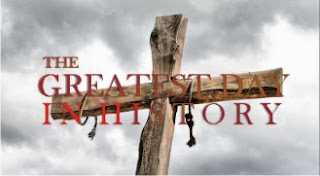 The three most significant days in history are Christmas, Good Friday and Easter.

Q. What is significant about Christmas- that God took on flesh and became a man. The creator of galaxies and the stars came as a helpless little baby.

Q. What’s significant about Good Friday- Jesus then suffered a horrible death on the cross. He was beaten and whipped and scourged on the cross- he laid down his life. That is where we left things off at Good Friday. The Sabbath was coming. The Jews wanted to keep the law. They murdered someone but did not want to break the law which is why they needed Pilate to pronounce the death sentence on him. Jesus’ body was taken down because they wanted to do everything before sundown (before the beginning of the Sabbath) - they took his body and embalmed it and left it there.

Jesus had spoke about his rising from the dead. His disciples did not believe him. The chief priests and the Pharisees went to Pilate. They address Jesus, who is the truth, as the deceiver. But they had faith for him to rise up again. The authorities ensured that no human can come and steal the body. There was a roman seal on it and armed roman guards there. Would the disciples even venture to steal the body? They were scared!

Then in Matthew 28 we come to Sunday early morning. Who goes to the tomb? It was the women who loved and followed him and cared for him. They went there out of their devotion- anoint his body. But before they had gone there, there was a violent earthquake. 2 significant things happened:


Matt 28:11- 15- “While the women were on their way, some of the guards went into the city and reported to the chief priests everything that had happened. When the chief priests had met with the elders and devised a plan, they gave the soldiers a large sum of money, telling them, “You are to say, ‘His disciples came during the night and stole him away while we were asleep.’ If this report gets to the governor, we will satisfy him and keep you out of trouble.” So the soldiers took the money and did as they were instructed. And this story has been widely circulated among the Jews to this very day.”
Think of how stupid the story is! If they were asleep, how did they see that they were the disciples.

1.       There was an empty cross: The fact is- Jesus was crucified and he died. Jesus was well and truly dead on the cross. It is important because he came to die for our sins. Romans 5:8-“But God demonstrates his own love for us in this: While we were still sinners, Christ died for us”. If he did not die, we are not saved.

Q. Do you know if your sins are forgiven?
Our sins have to be paid for. Either we pay for them or Jesus pays for them. All the religions of the world tell us what to do to pay for our sins. Jesus tells us nothing we do is enough, but he has died in our place. If you don’t know that your sins are forgiven, you just have to believe in the Lord Jesus- that he is fully man, fully God, and that he died for our sins.

2.       There was an empty grave- there are many political leaders, popes, etc. have tombs and mausoleums built for them and there are dead bodies in them. But Jesus doesn’t have one because he came alive. That is the magnificent truth. Roman 1:4- and who through the spirit of holiness, was declared with power to be the son of God by his resurrection from the dead.

This was the proof that he is really the son of God. It is the corner stone of Christianity.

Q. What is the significance of the resurrection?
The resurrection showed that God the Father was pleased with his sacrifice. Jesus was sinless but was delivered over to death for our sins. But death could not hold him. All the merit that Jesus earned has been credited to you. God is now pleased with us. He was raised to life for our justification. Romans 4:5- “However, to the one who does not work but trusts God who justifies the ungodly, their faith is credited as righteousness”

2 Corinthians 5:21- “God made him who had no sin to be sin[b] for us, so that in him we might become the righteousness of God”

The empty tomb is proof that we have been accepted by the father. Jesus has done it all, and we just have to believe.

3.       Empty grave clothes- Matthew 28: 8- 9- The women went to anoint Jesus but instead saw an empty tomb. Jesus then meets them. They worshipped him. They knew he was the Lord. In another account, we see that Peter and John also go with the women when they tell them that Jesus rose from the dead. In John we see that they still did not understand from scripture that Jesus was supposed to rise again. He was not stolen, he is risen and he is alive.

4.       Jesus appeared: Luke 24:36- they were startled and frightened thinking they saw a ghost. He ate with them. They touched him and fellowshipped with him. Jesus wants to do the same thing today. He is not risen and up there. He wants us to be involved in his plan. His plan is this- go and make disciples of all the world. The solution to all problems of mankind is found in Jesus. Only he can bring true peace for all mankind. In the Middle East we have Jews and Arabs worshipping together. Isn’t that amazing?

It would be great if Jesus’ resurrection was the end. But at that point he gives the great commission. We have a job to do on earth. To proclaim to everyone that Jesus is coming again. You and I are privileged to be a part of that plan.

Scientists are racking their brains trying to find the cure for diseases and thousands are dying every day! If you knew the cure, wouldn’t you share it? It is our job to share this news we have for salvation, with a dying world to see it transformed.