The week that was - PART 1 | Justin Jaykumar 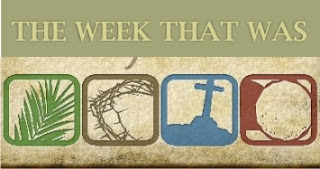 This message was preached by Justin JayKumar at Word of Grace Church on the 25th of March 2016. There is no audio for this message. This is Part 1 of a two part message on Good Friday.

We had so many activities they the week. Bit this weekend is historical. Two days that are well known. This week is also called Passion Week.

Let's look at what Jesus did during this week.
Jesus was resolute about the cross. This week people celebrate Palm Sunday.
The day he enter s Jerusalem.

Mk11:11
He goes into the temple. And then went to Bethany. Four nights were stayed here. This is the place of Lazarus resurrecting and Mary sitting at his feet
It was here that Jesus said I am the resurrection and the life.
Jesus did not live like a super human being. He was flesh and blood. He wept, slept, was angry.
He leaves Bethany on Monday and sees a fig tree Mk11:12. He cursed it even though it was not the season. It looked promising but not fruitful. The Jews were waiting for the Messiah

Next day he goes to the temple and clears the temple of the money changers. This was a big festival when Jews cane from all over the world.
The chief priests were challenging his authority but could not trap him. Matt 22:22,32,46,
On his way back Jesus was speaking to the dis on the end times.
This is the evening that Judas goes to the chief priests to betray him

He probably stayed in Bethany

Sends Peter and John to prepare the passover feast. He washes the feet of the disciples. Judas leaves to meet the chief priests.
Here the disciples are concerned with who will be the greatest.  Jesus was passionate bout the cross , the disciples were preoccupied with position.


He went to Gethsemane where he went often. So Judas knew where to find him.
When he was arrested everybody fled. One denied him, one betrayed him. He went through 6 trials. From evening, the whole night. In the morning the counsel meets and condemns him. Luke 22:6. They could not condemn him so they sent him to Pilate. They needed witnesses but nothing corroborated. Jesus offered himself up when he said I am the son of God. To Pilate they said he is rabbel rousing. When Pilate heard he was from Galilee he sent him to Herod but Jesus was silent with him. He was sent back to Pilate. Pilate wanted to free him. Said he had power over him. Jesus said he had no power over him bit could only do what God permitted him to.

These events were not planned by men but orchestrated by God.
The high priest wanted to arrest Jesus after the passover. But this would not fit into Gods plan. But then Judas betrayed Jesus and things fall in plan.
Jesus was mocked, struck etc for us.

Early morning the next day he was crucified. He suffered the whole week.
He fulfilled God's purpose in his life.

Word of Grace is an Evangelical (Born Again),  Spirit filled (Charismatic), Reformed, English speaking church in Pune that upholds the Bible as God's inspired Word for life. We are a church community that have people from every part of India and parts of the world. We are here to put the Great Command and the Great Commission into practice by equipping and releasing every member into works of service. To know more about us please log onto www.wordofgracechurch.org.
By Navaz DCruz - March 26, 2016