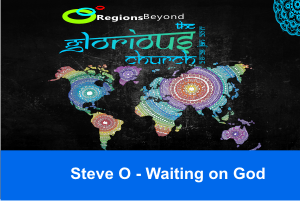 The is the final part in a 9 part series that was preached at the
Glorious Church, RegionsBeyond Conference 2017 held in Mumbai.

1 kings 17
We can learn lessons and be strengthened by the life of Elijah. I feel like I need to stir the younger people.
As we saw Elijah’s life, many said I want to be like him. Elijah who came from nowhere, stood before the King with all authority of representing God. He declared that there will be no rain in Israel. Then, God sends him from the lime light to an isolated place. So much that for 3 years they couldn’t find him. It is th Steve Oere that he grows.
We live in a world where we want things immediately. Waiting is not in our culture anymore. But Elijah finds himself after the big profile, just waiting before God.
Q. Do you want to sit before God and wait?
I know that on the second morning I’ll be saying, what’s next? Elijah stood before God and so he waited. He was patient. Years later in 1 Kings 17:8 the word of the Lord came to him- Arise and go to Zariapath.
At times, lonliness must have consumed his life. When these words come, they’re refreshing. As we go back to our churches, we are going back with his word. Now is the time to be patient and give ourselves to the purposes of God. He commanded a widow. Widows love to feed people. But he is still having to walk by faith.
The journey to Zariapath would have been a long journey. In verse 10 he asked the widow gathering sticks for some water and some food. Here the word is coming to life. She is a very poor widow with only a handful of flour and very little oil.
As we go to our churches we will face situations like this. But I know you’ll go back full of faith. You will face situation like and know the hope that comes with hearing God.
When I was in Lesotho, building up the church there, we were looking for a church building. There was an auction and I felt God saying go and bid. I bid for a building with no money to pay for it. I came back home having to pay the money in a couple of days. As I reached home, God spoke to someone else to give the exact amount of money to me.
To grow in faith, follow God to the platform- to the desert- to the widow. Don’t think that because someone gets up to preach they don’t have to learn this. Elijah has to learn faithfulness with the widow so that he could call forth the rain later. Do not fear. Go and do as you have said.
This conference has been marked by 3 things:
1.      Identity- who we are. I’m leaving as a different person. That means you’ve heard the word of God. Sit before God, take note of what he had said. Say, Lord, don’t let me go back to where I was.
2.      Mandate- why are we gathered
3.      Continuing to work on our relationships with one another.
God wants to give us a double portion, to multiply it. It is a promise over us. We are entering a season of multiplication. It’s going to happen through faith and obedience. We haven’t got enough flour. Our oil is little. But the promise was massive. We are going to go through a season of multiplication of gifting, grace and all that makes us who we are. There is a double portion.

Email ThisBlogThis!Share to TwitterShare to FacebookShare to Pinterest
Labels: FAITH, Regions Beyond, REGIONS BEYOND RESOURCES, Steve Oliver, The Glorious church 2017, Waiting on God