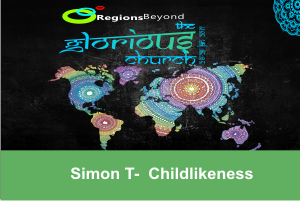 The is the eighth in a 9 part series that was preached at the
Glorious Church, RegionsBeyond Conference 2017 held in Mumbai.

I love kids. They see the world through completely different lens. Where we see danger, they see fun and adventure. Jesus takes children to explain Kingdom Principles. Jesus and his disciples were going to Capernaum. Wherever he went, people followed him. People join a crowd for different reasons. Some followed him to listen, out of intrigue. Some followed him seeking healing, and some just to harass him.

Mark 10:13-16 “And they were bringing children to him that he might touch them, and the disciples rebuked them. But when Jesus saw it, he was indignant and said to them, “Let the children come to me; do not hinder them, for to such belongs the kingdom of God. Truly, I say to you, whoever does not receive the kingdom of God like a child shall not enter it.” And he took them in his arms and blessed them, laying his hands on them.”

The kingdom of God is the hope of this nation and the nations of the world. He uses us to bring his Kingdom- it’s only a foretaste. There is a fullness that awaits everyone where there will be no pain, or suffering forever.

In this passage, we see that people were bringing children to Jesus. It was customary in those days for mothers to bring their kids to get blessing from the Rabbi. But there was a huge crowd. The disciples were used to crowds. So that can’t be the problem. The problem was that they were women with children. They have been shaped by their culture to respond in a certain way.

Children were to be seen, not heard. They were a burden until they give back to the community. But we have a problem. The disciples were now a part of the kingdom of God and have a new culture.

In Regions Beyond, we are intentional about diversity. Different cultures, clothing, friendships, etc. but our first culture is that of the Kingdom of God. We celebrate diversity until it is against the Kingdom of God. In UK, we are currently fighting our culture. It is not just our culture that has a problem.
In the Kingdom of God, the weaker parts are given more honour. No Jew and Greek, Man and Woman- it is one new man in Christ. We can’t earn salvation or work for favour. Forgiveness, holiness and salvation are gifts from God. Children have equal value.

The disciples were responding in a way their culture would respond. Jesus rebukes them for it. Jesus says, go towards those who are neglected- whom the world has rejected. That’s what he did. The attitude of the disciples was not through Kingdom thinking. How we live and love will either allow people to come towards Jesus or go away

All, includes all! Even those you would avoid, those who hurt and persecute you. No one is outside God’s love and we must remind ourselves of that.
Jesus was indignant about this. He says, don’t hinder the kids from coming to me. Can you imagine the look of the parents at this time? They would have been proud, knowing their children are of value.

Matt 18:4-6- “Whoever humbles himself like this child is the greatest in the kingdom of heaven. “Whoever receives one such child in my name receives me, but whoever causes one of these little ones who believe in me to sin, it would be better for him to have a great millstone fastened around his neck and to be drowned in the depth of the sea.”
Jesus has already taught into this. Under his kingdom, in his rule and reign, they have to become like children. But in a live situation, the disciples did not apply it. It’s practice over theory. Practice is so different from mouthing words.

So the children have no rights, and suddenly they are the centre of attention. Jesus does not say send the children or carry them to me. He said, let them come. The kids wanted to come to Jesus. Jesus takes this moment in a silenced crowd- where the disciples are embarrassed and the parents are smug- to explain a principle which is still true. The Kingdom of God belongs to such as these.
We need to become childlike. Not childish.

Q. What is it to be childlike?
Children demonstrate what this is.
1.      100% trust in their parents. Insecurity becomes a stronghold. A childlike trust in God makes us free from fear.
2.      A child is 100% dependant on their parents. Just like that we need to be dependent on our heavenly father because he is faithful and knows what is best. Some of us are going to have injections form God. Every situation you’re going through has a name. Jesus’ name is greater than all other names. He is a good father and will provide for us.
3.      A child is unqualified, yet unconditionally loved. It is not what we can bring to God. It is who we are. Its not true that you can be useful only when you are 21, married, with money in the bank, etc. You do not need to be Ravi Zacharias, Steve Oliver- men who have faith like mountains.
4.      Mature believers have childlike faith- a child is obedient to their parents- Not all the time, but eventually they do it.

5.      A child has access to their parents. We sit together in intimacy. No need to make appointments, try to tidy up our own mess. Too many Christians look like they’ve been baptised in lemon juice- so Serious!
One of the most difficult questions I’ve had to answer is Why. When we don’t get an answer to why God, we have to go to what we do know. We have to rest in the truth- that he is good, faithful, loves me with an everlasting love and provides for my every need.

7.      Children enjoy grace. They receive gifts with excitement and gratefulness
Have faith like a child. In the power he has placed in us. Our experiences can make us sceptical. To be secure, all a child needs is a loving look and a gentle touch. Jesus said we should believe with this faith.

We think we have to work it all out before we do it. But then we don’t need God in that. Joshua at the walls of Jericho had a childlike faith.

The attitude of trust, joy, humility, simplicity, dependence on the Father- all these are characteristics of a true disciple


Receiving the Kingdom is a gift. We can only accept it as a gift. Grow up and be more like a child. Our Father is for us. He is a good Father, giving good gifts to his children.