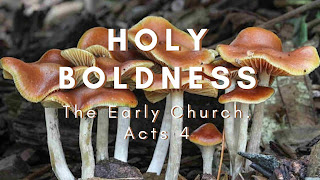 This message was brought to you by Lasya DCruz on June 21 2020 at Word of Grace Church via Zoom. For the audio please click here

Holy Boldness
Acts 4:1-21
How many of you have seen someone step out and be bold and be successful and wished that you were more like them? Do you feel like you can serve the Lord better if you were more charismatic? I feel most unqualified to talk about this because I’m the person with jitters whenever I have to speak in front of people. I hate calling, I would rather text, I despise conflict more than anything! You may not be an evangelist, but you are called to be a witness and there is available to us in Christ a holy boldness.

Our passage for today is Acts 4:1-21.
The priests and the captain of the temple guard and the Sadducees came up to Peter and John while they were speaking to the people. 2 They were greatly disturbed because the apostles were teaching the people, proclaiming in Jesus the resurrection of the dead. 3 They seized Peter and John and, because it was evening, they put them in jail until the next day. 4 But many who heard the message believed; so the number of men who believed grew to about five thousand. 5 The next day the rulers, the elders and the teachers of the law met in Jerusalem. 6 Annas the high priest was there, and so were Caiaphas, John, Alexander and others of the high priest’s family. 7 They had Peter and John brought before them and began to question them: “By what power or what name did you do this?” 8 Then Peter, filled with the Holy Spirit, said to them: “Rulers and elders of the people! 9 If we are being called to account today for an act of kindness shown to a man who was lame and are being asked how he was healed, 10 then know this, you and all the people of Israel: It is by the name of Jesus Christ of Nazareth, whom you crucified but whom God raised from the dead, that this man stands before you healed. 11 Jesus is “‘the stone you builders rejected, which has become the cornerstone.’ 12 Salvation is found in no one else, for there is no other name under heaven given to mankind by which we must be saved.”13 When they saw the courage of Peter and John and realized that they were unschooled, ordinary men, they were astonished and they took note that these men had been with Jesus. 14 But since they could see the man who had been healed standing there with them, there was nothing they could say. 15 So they ordered them to withdraw from the Sanhedrin and then conferred together. 16 “What are we going to do with these men?” they asked. “Everyone living in Jerusalem knows they have performed a notable sign, and we cannot deny it. 17 But to stop this thing from spreading any further among the people, we must warn them to speak no longer to anyone in this name.” 18 Then they called them in again and commanded them not to speak or teach at all in the name of Jesus. 19 But Peter and John replied, “Which is right in God’s eyes: to listen to you, or to him? You be the judges! 20 As for us, we cannot help speaking about what we have seen and heard.”
Let’s pray.
When we want to step out in Holy Boldness we need to examine 3 things:
1.      The Fire:
a.      In the wilderness, God was with the Israelites as a pillar of fire by the night. He was still Emmanuel, He was with them, by them, providing comfort and protection and sight. But in the New testament, our prayer is that our spiritual eyes be opened, that the eyes of our hearts be enlightened (Eph 1:18)

b.      At Pentecost, we see in Acts 2:3 “They saw what seemed to be tongues of fire that separated and came to rest on each of them”. Fire is used as an imagery of the Holy Spirit.

c.      Psalm 104:4 says that he makes his messengers (angels) as the winds and his ministers flaming fires – who are these minister?  2 Cor 5:18 – “All this is from God, who reconciled us to himself through Christ and gave us the ministry of reconciliation:”. It is our calling to host the fire of God.

d.      So what will you choose? The Holy Spirit will be your comforter, near you, beside you, but if you invite him within you, you better be ready to be set on fire.

f.       Holy Boldness is not a result of the exercise of our will or a personality trait, it is the result of complete and utter yieldedness.

g.      Application Question: How involved do you want the Holy Spirit to be in your life?

2.      The Faith:
a.      Notice that throughout the book of Acts, every time the fire comes, the people speak. And even in this passage, we see that peter filled with the Holy Spirit begins to speak – but what we say is important.

c.      When we share the gospel in an abrasive manner, to win an argument rather than a soul, we do not glorify Jesus.

d.      How many of you have experienced resistance to the gospel when you shared it?

e.      In verse 8-12, peter essentially gives a gospel invitation to the people persecuting him.

f.       The opposition sprung from the fact that Peter and John were proclaiming the resurrection of Jesus from the dead. It was a messianic proclamation and it was offensive to their belief that the Messiah was yet to come.

g.      In Acts 20:27 Paul says to the Ephesian Elders “for I did not shrink from declaring to you the whole the counsel of God.”

h.      In this generation, we have become experts in the skills of peace and favour and are afraid of falling out of favour with those around and above us. Though peace itself is a fruit of the spirit, pursuing peace at the cost of truth is dangerous.

i.       We must be committed to the truth – we must give ourselves to be changed by it. Our faith is rooted by being with Jesus. Sometimes we don’t feel like we can witness because we haven’t been with Jesus. Our first ministry is to the Lord.

j.       Emotionalism and eloquence can move hearts but doesn’t break chains, only truth does. Paul says in Romans 1:16 “For I am not ashamed of the gospel, because it is the power of God that brings salvation to everyone who believes”. Again in 1 Cor 2:1- 5 he says “When I came to you, I did not come with eloquence or human wisdom as I proclaimed to you the testimony about God...”

3.      The Fruit:
a.      What are the areas of fruitfulness we see in this chapter?
i.     In verse 4 it tells us that the number of men who believed grew to about five thousand. This is only the men without counting the women and children.
ii.     The healing of the lame man

b.      Peter and John were seemingly in big trouble, but the fruit was not hindered. It is important to consider that our circumstances are not indicative of the fruit we bear. The fruit is directly linked to abiding. It has to do with the good works God has prepared for you to do as you abide in Him. Peter and John were in this predicament because they were going to the temple to pray and did a good deed that was in their path.

c.      Has the gospel changed your life? Are you still growing or have you stopped? When people see the fruit in your life, it will do 2 things for you:
i.     It is undeniable v. 16 –““What are we going to do with these men?” they asked. “Everyone living in Jerusalem knows they have performed a notable sign, and we cannot deny it” 1 timothy 4:15 “diligent in these matters and absorbed in them so that your progress will be evident to all.”
ii.     It will speak for you v.  14 “But since they could see the man who had been healed standing there with them, there was nothing they could say” have you heard the phrase actions speak louder than words? That’s what we want – for our lives to be a defence of the gospel.

d.      Application questions:
i.     What was your last area of undeniable fruitfulness?
ii.     What good works does God have for you to do today?

We need to understand that the gospel is the hope of salvation. There is nothing else and no other name given to men by which we must be saved. If we are to grow in this Holy Boldness, we need to ask for the fire of God to dwell within us. We must be committed to being changed by the word and to proclaim the whole counsel of God, not just what is safe. And finally, we need to see progressive fruit in our lives.


Word of Grace is an Evangelical (Born Again),  Spirit-filled (Charismatic), Reformed, English speaking church in Pune that upholds the Bible as God's inspired Word for life. We are a church community that has people from every part of India and parts of the world. We are here to put the Great Command and the Great Commission into practice by equipping and releasing every member into works of service.  Word of Grace is a part of a wider international family of Churches called RegionsBeyond.To know more about us please log onto www.wordofgracechurch.org.
By Navaz DCruz - June 22, 2020