What Power! What Name! 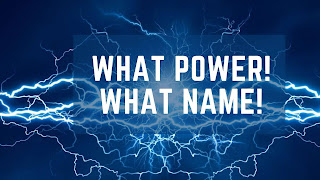 This message was preached by Abhishek Bansode on the 21st of June 2020 via zoom for Word of Grace. For the audio please click here.

What Power! What Name!

Acts 4: 1-21
Now as they spoke to the people, the priests, the captain of the temple, and the Sadducees came upon them, 2 being greatly disturbed that they taught the people and preached in Jesus the resurrection from the dead. 3 And they laid hands-on them, and put them in custody until the next day, for it was already evening. 4 However, many of those who heard the word believed; and the number of the men came to be about five thousand.5 And it came to pass, on the next day, that their rulers, elders, and scribes, 6 as well as Annas the high priest, Caiaphas, John, and Alexander, and as many as were of the family of the high priest, were gathered together at Jerusalem. 7 And when they had set them in the midst, they asked, “By what power or by what name have you done this?”8 Then Peter, filled with the Holy Spirit, said to them, “Rulers of the people and elders of Israel: 9 If we this day are judged for a good deed done to a helpless man, by what means he has been made well, 10 let it be known to you all, and to all the people of Israel, that by the name of Jesus Christ of Nazareth, whom you crucified, whom God raised from the dead, by Him this man stands here before you whole. 11 This is the ‘stone which was rejected by you builders, which has become the chief cornerstone.’ 12 Nor is there salvation in any other, for there is no other name under heaven given among men by which we must be saved.”13 Now when they saw the boldness of Peter and John, and perceived that they were uneducated and untrained men, they marvelled. And they realized that they had been with Jesus. 14 And seeing the man who had been healed standing with them, they could say nothing against it. 15 But when they had commanded them to go aside out of the council, they conferred among themselves, 16 saying, “What shall we do to these men? For, indeed, that a [a]notable miracle has been done through them is evident[b] to all who dwell in Jerusalem, and we cannot deny it. 17 But so that it spreads no further among the people, let us severely threaten them, that from now on they speak to no man in this name.”18 So they called them and commanded them not to speak at all nor teach in the name of Jesus. 19 But Peter and John answered and said to them, “Whether it is right in the sight of God to listen to you more than to God, you judge. 20 For we cannot but speak the things which we have seen and heard.” 21 So when they had further threatened them, they let them go, finding no way of punishing them, because of the people, since they all glorified God for what had been done.

We continue our journey into Acts, last week we heard about how Peter and John looked at a lame man and said to him: “Silver and gold I have none but as I have I give to thee, in the Name of Jesus Christ, get up and walk” and the lame man was healed.

In this passage of scripture, we see, after the man has been healed, Peter and John are taken into custody and then questioned by them. When I read this scripture the thing that jumped at me from this was the question the Sadducees asked the apostles: by what power or by what name have you done this? And my thought was it should not have been a question at all, it should have been an Exclamation!
WHAT POWER! WHAT NAME!!

The 3 points I want to concentrate on are:
1. Power
2. Name
3. Undeniability

1. Power
We see at the beginning of the chapter in verse 2 it is mentioned that soon after the miracle which has happened, Peter and John are preaching about the resurrection, and that's the word that people are believing.

In 1 Cor 15: 17, it says that the whole basis of our faith will be futile if we don’t believe that Christ is risen, the resurrection power and resurrection of Christ is the foundation of our faith. It is an amazing power and amazing knowledge to rejoice, in the same chapter in verse 21 and 22 we see that as death came through one man, through Christ and his resurrection we have a new life, everyone who belongs to Christ will be given new life. Amazing isn't it?

Salvation: Now when Peter and John were preaching about the resurrection, it was the Sadducees who arrested them, this the same group of people who had asked Jesus the question about the woman who had multiple husbands, whose wife she would be post resurrection, that was a question designed to entrap Jesus.
This group within the Jewish community had a major difference/disagreement with the other group that of Pharisees, on the resurrection, Sadducees did not believe in the resurrection. But these people had now nothing to say, they could not deny that the resurrection power had just made a lame man whole again. In Roman 8:11 it says - the same Spirit which raised Jesus is work in our mortal bodies to give life, and here in front of the eyes of the Sadducees were seeing the same power work in front of their eyes to give life to this lame man’s body. So really instead of them questioning “By what power? And what name?” they should have been saying WOW! What Power! What Name!.

Peter goes on to answer them and he says to them there is no other name which brings “salavation” to man but the Name of Jesus Christ (Verse 12). The word used in Greek for salvation here is Soterio which is a Noun, (Noun describes: a person, place, thing etc) what it does for us is the verb form of it which is Sozo, which as we recently heard Pastor Robert Morris preach of is a very rich and loaded word, it means:

-To save
-To keep safe and sound
-To rescue from danger and destruction
-To save a suffering one from perishing
-To deliver from the penalties of judgement
-To make one whole: Body,Soul and Spirit
The Power brings all this, verb an action, the Resurrection power brings us this amazing amazing action, to-- as in to be saved, to be rescued, etc. And we see this power in action here in this passage- a man 40 years lame, made whole again, Salvation for him meant something so tangible and amazing.

Peter tells the Sadducees, you rejected the stone which God has made into the chief cornerstone, we should be mindful not make the same mistake, and reject this amazing amazing gift of God, and amazing person of Jesus Christ and make Him the Cornerstone of our lives to experience the resurrection power in our lives which brings Salvation- both in the here and now (tangible) and our eternity.

In our lives we might be going to through many problems, strife, sickness the good news is that this same Resurrection Power is available to us in the Name of Jesus Christ to bring us Salvation, to save us , to rescue us, to save from suffering and to make us whole in body, soul and mind.
Which brings us to the next point:

Historically, for anything to be done, it needed and authority to give you the right to do it, like the Romans, did whatever in the name of Caesar, and so the Sadducees were asking Peter and John whose authority they were functioning in.

The Exaltation of the Name of Jesus above every other name: The Name of Jesus Christ, the Bible tells us is Exalted above all other names, in Phil 2:9-11 it says that God has HIGHLY exalted Him and has given Him Name above every name, so at the Name of Jesus every knee shall bow, those in Heaven, those on earth, those under the earth, and every tongue should confess that Jesus is Lord, to the glory of God the Father.

In Rom 10:13 it says whoever calls on the name of Jesus Christ shall be saved. This word saved is the same word Sozo, which we saw. So whoever calls on His name can have the same things which we heard now for himself or herself. (to be save, to be rescued,to be made whole etc)

In this passage, when the Sadducees are questioning the apostles, you can see that they had nothing to bring against the apostles, Peter asks them “are we being questioned for doing something good?” and they had no answer to give him, because the power of the name of the resurrected Jesus was in front of them and they could NOT deny it.

In those days to be excommunicated was a big deal, but Peter John were bold, they said in their own words, we cannot but preach about Jesus Christ, it was Undeniable.
It is the compelling power of the Name of Jesus Christ and his resurrection which was so evident, that when Peter and John were severely threatened, their answer was so simple: you tell us, should we listen to God or you?

When we are talking about the Name exalted above all power and authority isnt it just logical to listen to Him than anyone else?

So the Resurrection Power and the Exalted Name of Jesus Christ really gives us today the Boldness to stand and proclaim the gospel in face of opposition, persecution and ridicule. We cannot help but Preach: WHAT POWER! WHAT NAME!


Word of Grace is an Evangelical (Born Again),  Spirit-filled (Charismatic), Reformed, English speaking church in Pune that upholds the Bible as God's inspired Word for life. We are a church community that has people from every part of India and parts of the world. We are here to put the Great Command and the Great Commission into practice by equipping and releasing every member into works of service.  Word of Grace is a part of a wider international family of Churches called RegionsBeyond.To know more about us please log onto www.wordofgracechurch.org.
By Navaz DCruz - June 23, 2020