Should We Pursue Signs & Wonders 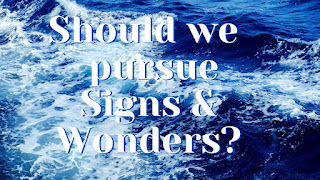 This message was preached by Colin D on the 28th of June 2020 via zoom for Word of Grace. For the audio please click here. To listen to the worship click here

12 The apostles performed many signs and wonders among the people. And all the believers used to meet together in Solomon’s Colonnade. 13 No one else dared join them, even though they were highly regarded by the people. 14 Nevertheless, more and more men and women believed in the Lord and were added to their number. 15 As a result, people brought the sick into the streets and laid them on beds and mats so that at least Peter’s shadow might fall on some of them as he passed by. 16 Crowds gathered also from the towns around Jerusalem, bringing their sick and those tormented by impure spirits, and all of them were healed.

What an amazing time it must have been. 1000's coming to faith. Mighty signs and wonders - that Peter's shadow falling on a sick person was enough to heal them. Those tormented by evil spirit are delivered.


The world has not changed much in the area of sickness since 2000 years. We still have people being afflicted with all kinds of diseases.

What I would like to put forward is that the early church advanced thru the preaching of the gospel with signs and wonders. We too must desire for the same.

• Acts is a HISTORY (of what happened in the first century) but it is also a BLUEPRINT (for what God wants to see happen in the church today).
THE BIG IDEA: We will consider today: Why does God want us to contend for signs and wonders and healings and miracles in the church, and how do we see more of them in our lives?
• “Then He called His twelve disciples together and gave them power and authority over all demons, and to cure diseases. He sent them to preach the kingdom of God and to heal the sick.” (Luke 9:1-2).
• “And when He had called His twelve disciples to Him, He gave them power over unclean spirits, to cast them out, and to heal all kinds of sickness and all kinds of disease… And as you go, preach, saying, ’The kingdom of heaven is at hand.’ Heal the sick, cleanse the lepers, raise the dead, cast out demons. Freely you have received, freely give.” (Matt. 10:1,7-8).

WHY SHOULD WE PURSUE SIGNS AND WONDERS?

1 . GOD IS GLORIFIED WHEN PEOPLE ARE HEALED

Luke 7:11-1611 Soon afterwards, Jesus went to a town called Nain, and his disciples and a large crowd went along with him. 12 As he approached the town gate, a dead person was being carried out—the only son of his mother, and she was a widow. And a large crowd from the town was with her. 13 When the Lord saw her, his heart went out to her and he said, “Don’t cry.”14 Then he went up and touched the bier they were carrying him on, and the bearers stood still. He said, “Young man, I say to you, get up!” 15 The dead man sat up and began to talk, and Jesus gave him back to his mother.16 They were all filled with awe and praised God. “A great prophet has appeared among us,” they said. “God has come to help his people.” 17 This news about Jesus spread throughout Judea and the surrounding country.Matt 15:30-3130 Great crowds came to him, bringing the lame, the blind, the crippled, the mute and many others, and laid them at his feet; and he healed them. 31 The people were amazed when they saw the mute speaking, the crippled made well, the lame walking and the blind seeing. And they praised the God of Israel.32 Jesus called his disciples to him and said, “I have compassion for these people;  they have already been with me three days and have nothing to eat. I do not want to send them away hungry, or they may collapse on the way.Acts 3: 8 He jumped to his feet and began to walk. Then he went with them into the temple courts, walking and jumping, and praising God. 9 When all the people saw him walking and praising God, 10 they recognized him as the same man who used to sit begging at the temple gate called Beautiful, and they were filled with wonder and amazement at what had happened to him.

2 . PEOPLE ARE SAVED WHEN WHEN MIRACLES ARE PRESENT

On the day of Pentecost - 3000Peter and John heal the lame man - 2000 Acts 5 - v14   14 Nevertheless, more and more men and women believed in the Lord and were added to their number.Book of Acts 17 instances when signs and wonders take place and people are saved.In Act 5 - Peters shadow, crowds gathered from around Jerusalem. All of them were healed.However, there is a vast difference between our experience and theirs. We are not seeing the kinds of signs and wonders that the early church saw. However, we are seeing some healings happening in some places and at some times. You may have met people who had a sickness where doctors had given up hope and medicines were not working. But they came for prayer and in Jesus name the person was healed and the whole family came to faith.


That would be wonderful if it happened today again on a much larger scale.
What we must not do is make our experience of not seeing signs and wonders and say this is normal. The normal is what Jesus says it is.

QUOTE: “It is perfectly clear that in New Testament times, the gospel was authenticated in this way by signs, wonders and miracles. . . Was it only meant to be true of the early church? . . . The Scriptures never anywhere say that these things were only temporary—never! There is no such statement anywhere.” (Dr. Martyn Lloyd-Jones, The Sovereign Spirit).

The signs and wonders open the door for the gospel to be preached.Mark 16:20 20 Then the disciples went out and preached everywhere, and the Lord worked with them and confirmed his word by the signs that accompanied it.

(2) Ask for Signs and WondersActs 4 29 Now, Lord, consider their threats and enable your servants to speak your word with great boldness. 30 Stretch out your hand to heal and perform signs and wonders through the name of your holy servant Jesus.”
John 14:12 New International Version (NIV)12 Very truly I tell you, whoever believes in me will do the works I have been doing, and they will do even greater things than these because I am going to the Father.

(4) Look for an opportunity to pray for the sickJam 5:1313 Is anyone among you in trouble? Let them pray. Is anyone happy? Let them sing songs of praise. 14 Is anyone among you sick? Let them call the elders of the church to pray over them and anoint them with oil in the name of the Lord. 15 And the prayer offered in faith will make the sick person well; the Lord will raise them up. If they have sinned, they will be forgiven. 16 Therefore confess your sins to each other and pray for each other so that you may be healed. The prayer of a righteous person is powerful and effective.17 Elijah was a human being, even as we are. He prayed earnestly that it would not rain, and it did not rain on the land for three and a half years. 18 Again he prayed, and the heavens gave rain, and the earth produced its crops.

Word of Grace is an Evangelical (Born Again),  Spirit-filled (Charismatic), Reformed, English speaking church in Pune that upholds the Bible as God's inspired Word for life. We are a church community that has people from every part of India and parts of the world. We are here to put the Great Command and the Great Commission into practice by equipping and releasing every member into works of service.  Word of Grace is a part of a wider international family of Churches called RegionsBeyond.To know more about us please log onto www.wordofgracechurch.org.
By Navaz DCruz - June 30, 2020