Lessons from Stephens Speech Part 3 | A Godly Response To Conflict 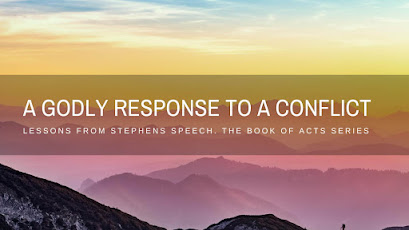 This message was preached by Shoma Peter via zoom  Word of Grace Church, on August  30th 2020. For the audio please click here.

a godly response to a conflict

We face different kinds of conflict in our life. As a Christian how are we supposed to respond to these conflicts? In today’s scripture, we will see how Abraham got into a conflict situation with Lot and how Abraham and Lot responded to this conflict. Let us thereby learn from Abraham’s godly response and mistakes of Lot.

A. RESPONSE OF ABRAHAM

So, Abram said to Lot, “Let’s not have any quarrelling between you and me, or between your herders and mine, for we are close relatives.

Abraham was blessed by God abundantly, but those possessions didn’t possess him. Being the eldest and having a promise from God concerning the land, Abraham could have taken the decision of throwing out Lot and his herdsmen from the land. However, he chose to pursue peace over prosperity.

Make every effort to live in peace with everyone and to be holy; without holiness no one will see the Lord.

Whenever we are in a strife always, pursue peace.

2. Abraham trusted in the Lord

Abraham knew that the source of his blessing is God and not the land where he dwells. He walked by faith and not by sight. He believed God can bless him anywhere.

5 Trust in the Lord with all your heart and lean not on your own understanding;

6 in all your ways submit to him, and he will make your paths straight.

Always trust in the Lord in every circumstance.

Abraham already had a promise from God. But after Lot left, God reaffirmed His promise to Abraham in detail.

14 The Lord said to Abram after Lot had parted from him, “Look around from where you are, to the north and south, to the east and west. 15 All the land that you see I will give to you and your offspring forever. 16 I will make your offspring like the dust of the earth, so that if anyone could count the dust, then your offspring could be counted. 17 Go, walk through the length and breadth of the land, for I am giving it to you.

B. RESPONSE OF LOT

1.Lot walked by sight and not by faith.

Lot chose what he saw with his physical eyes instead of humbling himself and asking his uncle to have the first choice. Abraham was there for him when his father died and took care of him all this while. Lot immediately grabbed the opportunity to take the land that looked green and well-watered, for himself. He could only see the financial blessing he would get by choosing that green land. If he had walked by faith trusting in the Lord, God would have given him a better place.

We should always trust in God and walk by faith in every situation.

2. Lot chose to dwell near the ungodly

12 Abram lived in the land of Canaan, while Lot lived among the cities of the plain and pitched his tents near Sodom. 13 Now the people of Sodom were wicked and were sinning greatly against the Lord.

Lot pursued prosperity and he pitched his tent near the ungodly. There is nothing wrong in talking to the ungodly. In fact, we should always seek for an opportunity to share the gospel with them. The way we got saved, others should also be saved. But the bible says we should not dwell in the company of ungodly. Lot had a choice but he chose to settle in Sodom, as it would lead him to financial growth. In Genesis 19, we read that Lot, later on, got settled in Sodom with the wicked people. He only saw the financial blessing from that place but never thought how bad it could impact his family spiritually. He compromised his spiritual well-being for prosperity.

The end result of this response was a downfall. Sodom was destroyed due to their great sin and Lot while running away from that place lost his wife and had to hide in cave with his daughters.

What do we learn from this message?

In a conflict situation we should always