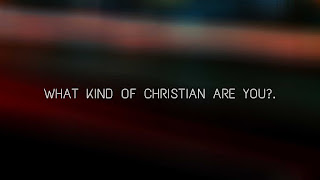 Promises of blessing were given to Abraham and it was Lot who tagged along.

The problem was it was a problem of “ too much”. The Land could not support them. Last week we saw how Abraham and Lot separated.

In the world, we have Christ-followers and those who do not follow Christ. What about the church? We have two types of Believers and those who have not yet put their faith in Christ. We pray that God will work in our lives.

We also have two kinds of believers that are represented in Abraham and Lot and all the shades in-between.

1 Cor 10:6-13 6 Now these things took place as examples for us, that we might not desire evil as they did

Lot - Was Lot a believer? He chose to live in Sodom and Gomorrah and lives with wicked people (Genesis 19) There is not much evidence about this till we read Peter

6 if by turning the cities of Sodom and Gomorrah to ashes he condemned them to extinction, making them an example of what is going to happen to the ungodly;[a] 7 and if he rescued righteous Lot, greatly distressed by the sensual conduct of the wicked 8 (for as that righteous man lived among them day after day, he was tormenting his righteous soul over their lawless deeds that he saw and heard);

He rescued Lot a “righteous man”. Three times Peter calls Lot a righteous man. However, his being a believer - in regards to his lifestyle was not great.

Abraham - the Father of the faithful, Lot as one scarcely saved.

Lot chose to live next to Sodom and has to leave when the City had to be destroyed.

Lot missed a glorious legacy. Lot’s descendants became Ammonites and Moabites that were a thorn in the flesh and the Israelites.

In the church you have spiritual believers and sensual believers. The bible calls them Carnal Christians. Which one are you?

1 Cor 3:1 - But I, brothers,[a] could not address you as spiritual people, but as people of the flesh, as infants in Christ.

Mere infants in Christ, Lot lived with his physical eyes but Abraham; he flowed in the promises of God.

How did Lot make such a bad decision? Why did he continue to live there? Perhaps it was his wife’s influence. She turned back and turned into a pillar of salt that is perhaps an indicator. What can we learn about Lot? Was he Spiritual or Carnal?

Saved through the skin of their teeth. Lot is an example of this. Everything was burnt up.

We have these in Word Of Grace as well, people who want to get by with as little as possible.

In your marriage - one could be spiritual and one could be carnal. Who is influencing whom? You do what is right and your spouse will follow you...?

As a single, who are your friends?

You are known by the company you keep. We are in the world but not of it.

Examine yourselves to see if you are in the faith. Is there evidence that you are a Christ-follower? Without Peter telling us, we would have not considered Lot righteous.

Characteristics of a Carnal Christian:

Samantha asked us earlier, “Are you happy with your life?” What legacy will you leave behind? You have to make a choice on how you want to live your life.

Ezekiel tells us about Sodom - they were arrogant, overfed and unconcerned. Did not help the poor and needy and were proud.

We need to walk in humility. 4 kings defeated 5 kings.

v13 - Then one who had escaped came and told Abram the Hebrew, who was living by the oaks of Mamre the Amorite, brother of Eshcol and of Aner. These were allies of Abram.

King Keddo captured Lot and family. Abraham took 318 trained men and went to Dan. He went in the night - it speaks of conviction, and attacked the King and rescued Lot.

Abraham - had 318 born and trained in his family. We need men and women trained in spiritual warfare to do mighty exploits on our knees. We need to push back evil with prayer, proclaiming the word and doing good.

Abraham went on to rescue Lot. Abraham is a picture of Jesus. Lot chose the wrong paths but God did not desert him. He rescued him.

So what kind of believer are you? If you have not believed, put your faith in Jesus today. Are you Spiritual or a Carnal believer? Examine yourself. Ask the Holy Spirit to highlight your heart.

Am I interested in studying God’s word? In Christian fellowship? Unity in the church? Praying, fasting and giving?

To the spiritual believers - well done!

To the carnal Christians - repent and come back.